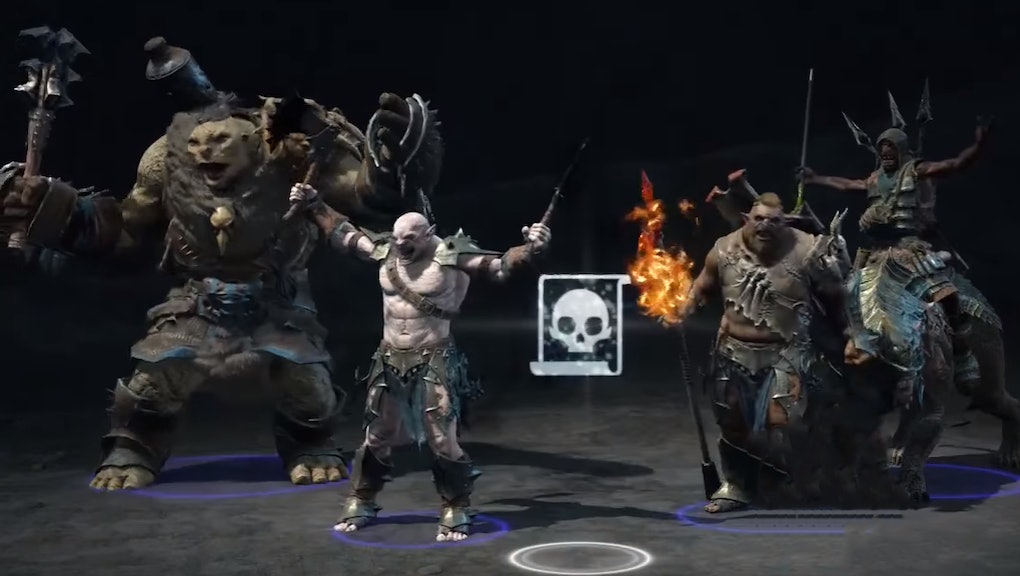 ‘Shadow of War’ Microtransactions: Loot chests will be available in-game via premium currency

Middle-earth: Shadow of War premium currency microtransactions and loot chests were announced yesterday via a stream on Monolith’s official Twitch channel. The game will have two different types of currency players can use to buy chests containing equipment, boosts and new orc followers.

Mirian is the basic in-game currency you can earn by defeating “treasure orcs,” breaking down unused gear and finding caches in-game. Gold is a premium currency players can exchange for real legal tender, which can then be used to buy higher-level loot chests. Gold will also be given to players in small doses at “specific milestones” and community challenges, but how much and how often isn’t known yet.

Shadow of War microtransactions: What’s available for purchase in the game’s market

In the stream, Monolith broke down the categories of items that will be available in Shadow of War’s market.

War chests: Purchasing these chests will add new orc followers to your army. Orcs will vary in rarity the same way gear does, with rarer orcs having better and more plentiful abilities. War chests can also contain training orders that level up orcs and give them useful perks, like fire weapons or followers.

Loot chests: These contain gear the player can equip, like weapons and armor. Gear varies in rarity, with higher levels giving Talion better ability boosts. You can also get XP boosts in these chests.

Bundles: The Shadow of War market will sell themed bundles Monolith will switch out from time to time. These bundles will be focused towards a certain theme. One could contain stealth-based items and orcs, while another might help players seeking to add fire-based weaponry and fighters to their army.

XP boosts: These consumables help you more quickly level up Talion, but they only last for a short amount of time.

Shadow of War microtransactions: What can I get with mirian vs. gold?

Where the two currencies differ is the quality of the market items you can purchase with them. For example, 500 mirian can get you a silver war crate, which guarantees at least one epic orc follower, another orc of random rarity and one training order.

For 200 gold — and we’re not sure what the exchange rate is from USD to Shadow of War gold — you can get a gold war chest, which gets you three orc followers, one of which will always be legendary, two that will always be epic and two consumables.

Unfortunately, there are too many variables we don’t know about Shadow of War’s microtransaction system to decide whether or not it’s a big deal. It will all depend on how hard it is to accumulate mirian, the rarity drop rate of silver chests vs. gold chests and the quality of chest orcs vs. the ones you can recruit in-game.

Monolith pointed out several times in the stream that the content purchased through the market was freely available in-game and that the ability to buy loot crates was solely for those who wanted to save a little time. Middle-earth: Shadow of War looks like it will be a great successor to Shadow of Mordor, so I sincerely hope this isn’t something that will break the game. However, I’ve heard “it’s not pay-to-win” before, only to discover a title is actually “pay-to-not-grind-ten-thousand-hours.”

We’ll know for sure when the game releases Oct. 10.