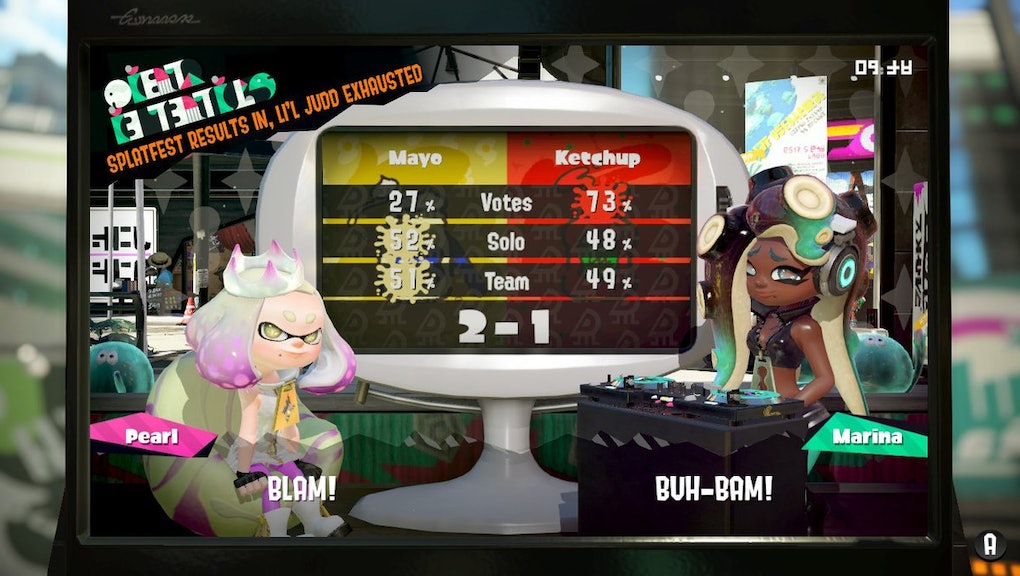 ‘Splatoon 2’ Splatfest Winner: The results, who won, and when the next one will be

The Splatoon 2 Splatfest took place yesterday in North America, with Team Ketchup and Team Mayo going head-to-head to see which condiment was the best. The results are not what players were betting on seeing, and there are some questions on how exactly they were calculated. The Splatfest winner ended up being Team Mayo, but their upset victory may change the way these events are handled in the future.

Players participating in Splatfest had to choose one of two teams. What made Team Mayo’s victory so odd was that 73% of players chose Team Ketchup, while Mayo only got the allegiance of 27%. Somehow though, Mayo managed to slip past Ketchup with 52% Solo wins vs. 48%, and 51% Team victories against 49%.

Some fans believe Team Ketchup was so popular because Marina was a member. She’s been a favorite character since she was revealed, so it makes sense players would want to rep her. The overwhelming amount of Splatoon 2 fans who chose Team Ketchup led to an imbalance in matchmaking. Some members of Team Ketchup calculated that as high as 85% of their matches were against players on the same team as opposed to Mayo players.

No one’s really sure how Splatoon 2 calculates Splatfest stats. We’re not sure if the Ketchup vs. Ketchup matches counted at all, or if they somehow counted as a simultaneous win and loss. This may be a factor in Team Ketchup’s loss.

However, Team Mayo won the Splatfest in Europe and Japan, too, so maybe there’s something different at play.

Splatoon 2: When will the next Splatfest be?

Nintendo hasn’t revealed when the next Splatfest will be yet. Looking back at the schedule for the first Splatoon, they were held at somewhat irregular intervals.

However, we can infer that there will more than likely be at least one or two Splatfests per month. That means the next one will probably take place a little later this month or early September.

Read more of our Splatoon news and coverage, including our impressions of the open beta back in March and at the Nintendo Switch event in January. Find out everything we learned about the game back in January. If you’re looking for more information about the April 2017 Nintendo Direct, check out the proceedings here. Or if you want to check out general Nintendo Switch news see reports of screen defects in the Switch and what you can expect if you’re trying to buy one.