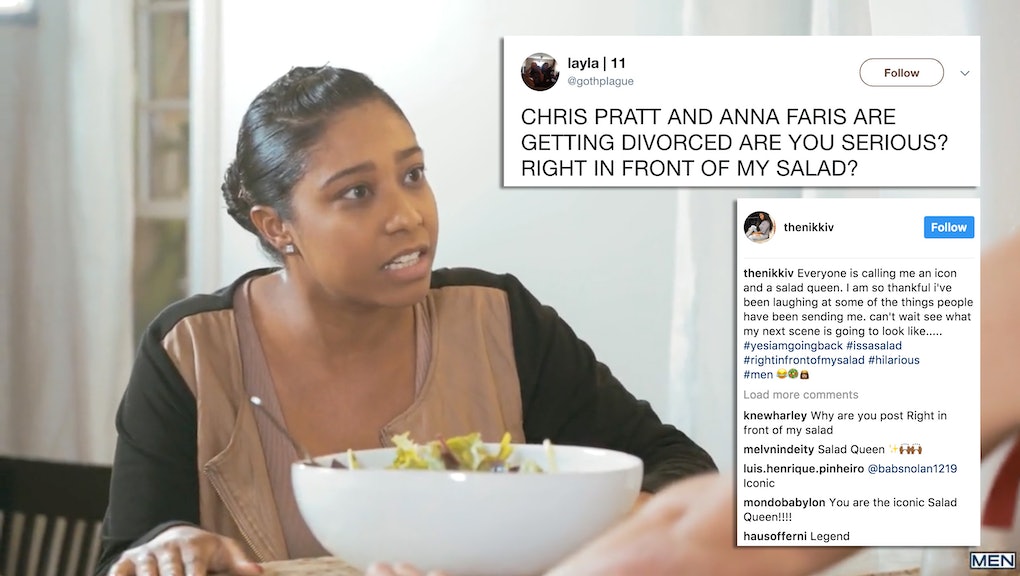 Meet Nikki V., the “Right in Front of My Salad?” meme’s breakout star

If you’ve been on any kind of social media in the past few days, you’ve almost certainly seen what we’re talking about: a woman, looking incredulous, taking personal offense to any number of things — transphobia, the happiness of others, capitalism itself — with six simple words: “Right in front of my salad?”

We spoke with the woman who started it all. She’s a model and actress who goes by the name Nikki V. — though lately, her fans have taken to calling her “queen of salad” — and she gave us the details on the meme’s NSFW origins.

The birth of the “Right in Front of My Salad?” meme

As BuzzFeed reported last week, this meme originated from the pornographic gay film Private Lessons Part 3. In the now-viral clip, a woman walks into her kitchen to feast on a bright, bountiful salad that a private chef — wearing nothing but a red apron — has prepared for her. While they’re making small talk, she suddenly realizes what’s actually happening: Her husband, who hired the chef, was in the midst of having sex with him before she got home. Rather than call things off, the two attempt to subtly continue having sex, despite the fact that she’s a few feet in front of them.

Upon realizing what’s going on, the wife has a delightfully absurd reaction: “Are you guys fucking?” she asks. “Are you serious? Right in front of my salad?”

If you want to see the clip, it’s on Twitter. (It’s obviously NSFW, though not much is visible.)

It’s never easy to pin down exactly what qualities help a meme penetrate the internet with such fervor, but there’s something about the line “right in front of my salad?” that offers a kind of universal shorthand for an experience we’ve all had, right? How many times have you been lulled into a false sense of security, only to realize that something untoward had been happening right under your nose — or, in front of your salad — the whole time?

BuzzFeed’s original report noted that this woman scorned was an extra, and that the actor in the red apron, Jake Porter, couldn’t remember her name.

Good news, everyone: We found her.

Even though “right in front of my salad” feels ubiquitous now, its origins are remarkably quick and dirty. In fact, Nikki landed the gig in the most transactional way you can imagine: a Craigslist ad.

“It was noon when I got [to the set], and I wasn’t even there for 10 minutes,” Nikki said over the phone. “I did two or three takes of the same scene over and over and they were like, ‘Yeah, we love it. It’s perfect.’”

And that was that.

Nikki didn’t even have much of a script to work with. She knew she had to come in, greet her “husband” — played by Jaxton Wheeler — and then react in anger once she saw him and his co-star, Porter, having sex.

“I did have a script, but it was so little because I was just supposed to be an extra,” she said. “It was just like, ‘Hi, honey, how was your day?’ ‘Oh, it was good,’ and then the whole thing with the salad was me basically improvising. I was just ad-libbing.”

“The whole thing with the salad was me basically improvising. I was just ad-libbing.”

From the sound of it, the whole process was surprisingly fun. At first, Nikki said she was nervous about booking a gig through Craigslist, but that went away when she met her fellow co-stars.

“At first it was [uncomfortable], but then I was like, ‘Ooh, he has a nice booty, these guys are cute,’” she said.

The search for the queen of salad

Since Nikki was just an extra, not many outlets identified her by name. But some eagle-eyed sleuths on Tumblr — like gaysexalltheway — found her page on Instagram, seemingly through her use of the “#rightinfrontofmysalad” hashtag. And they’re not the only ones. Since the meme gained steam, her follower count has been escalating quickly.

“My following was already at 20,000, but I think because of this, it’s going up daily,” Nikki said. “I’m very grateful because everyone’s calling me ‘queen of salad.’ I’m like, ‘Sure, I like salad, but I’m not the queen of salad. I’m not a salad guru.’”

All this attention isn’t limited to the online world of Instagram, either. Recently, she’s had a few real-life run-ins with people who recognized her at her day job.

In fact, the way Nikki first figured out that she had become a meme wasn’t through stumbling across a post online. The first person to break the news to her was her boss. But don’t worry: He was fully onboard the meme train.

“I live for you,” her boss texted, with the now-famous clip attached, she said.

So, did Nikki ever get to finish that massive salad? She said no, and she’s not happy about it, because it was surprisingly tasty.

“It was really good,” she said. “I don’t think a lot of people know this, but [Porter], the guy in that red apron, actually prepared the salad for me. Before I left, I was like, ‘Oh, can I take this?’ They didn’t let me take the salad.”

Nikki couldn’t identify exactly what made it so good, but she has theories.

“I think it was the dressing,” she said. “Because it was a mix of, like, romaine and spinach — it just looked like a really delicious salad. And it had tomatoes, and I don’t even like tomatoes, but it was a really good salad. ... I don’t know what they did with it, but there probably was a reason why they needed it.”

Probably a question better left to the imagination.

She’ll get her chance, too. Nikki’s been in contact with the folks at Men.com, who want her back for another scene, she said. (We reached out to Men.com for comment.) She’s just waiting to hear when she needs to come in. Plenty of time to stock up on some to-go boxes.