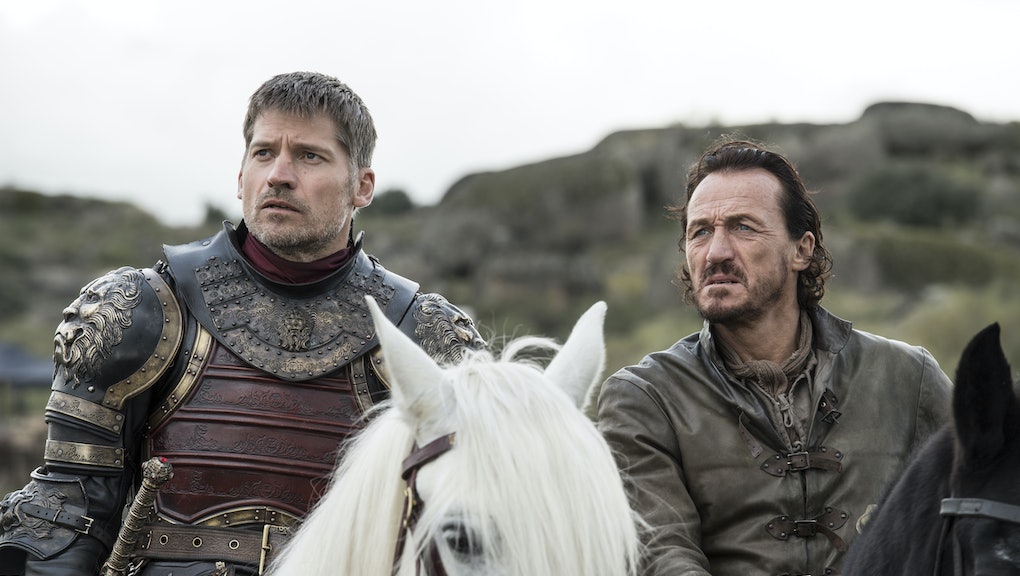 ‘Game of Thrones’: The battle between Jaime and Dany was pretty epic, except for one glaring problem

Let’s just make something clear right off the bat: The final battle sequence for Sunday night’s Game of Thrones, which HBO inexplicably dubbed the “loot train attack” in its post-episode featurette (I can think of 100 better names, like “Drogon’s rage”) was one of the show’s most breathtaking, unforgettable moments. And for a series that’s featured epic battles against hordes of the undead and two instances of exploding wildfire, that’s saying something.

Yet the final moments of the battle — in which Jaime Lannister picks up one of the giant spears made to defeat Daenerys Targaryen’s dragons and wields it like a lance, only to be rescued from Drogon’s fire in the last second by Bronn — didn’t sit well with me. The ending itself is a cliffhanger: It implies that Jaime and Bronn are sinking to the bottom of a river, weighed down by their armor. But, c’mon. The literal armor may be heavy, but the plot armor will keep Jaime afloat. Thrones loves to subvert expectations, but the idea that a somewhat ambiguous shot of Jaime descending into the depths will be the last we see of the Kingslayer? That’s about as unlikely as Jon staying dead after he was betrayed by the Night’s Watch in season five. As one of Thrones’ central characters, Jaime isn’t going down so anticlimactically. Plus, if some theories regarding him and Cersei Lannister are correct, he’s got a much bigger role to play in the final two seasons.

So let’s assume, almost assuredly, that Jaime survives. What you’re left with is a battle that’s heavy in spectacle but with sufficiently smaller stakes. Did anyone important — let alone someone with an established name, sorry Dickon — die in that sequence? No such person did, and considering the previous week’s episode sped through two other battles (the Unsullied taking Casterly Rock and the Lannisters taking Highgarden), it feels like Thrones is saving its best moments for last. Still, even if this week’s incredible battle is just an elaborate way for the showrunners to stall some monumental character deaths, so be it — I can’t imagine them doing so in a more spectacular fashion.

But the “loot train attack” (ugh) does advance the story in other ways. Running out of choices with the Unsullied stranded at Casterly Rock, Dany decides to take the initiative and lead the Dothraki to the outskirts of King’s Landing. And even with just Drogon on their side, the result is devastating for the Lannister army. Nearly everyone is wiped out, and from Jaime’s perspective, the whole scene is one of abject horror. Left and right, his bannermen are either mowed down by the Dothraki or roasted alive by Drogon’s flames. Some are turned to ash almost instantaneously. Cersei had the upper hand for the first three episodes, but Dany just played her trump card. It’s damn effective.

Still, it’s a bit concerning that Dany shows up to battle in the first place. Enraged by Tyrion’s feeble war tactics against his brother and sister — he really is striking out bad — she’s compelled to take matters into her own hands. She still asks for Jon Snow’s counsel on the matter, and he suggests that she should bide her time, showering her with praise for how she’s achieved the seemingly impossible to cultivate her followers. (Also, as Ser Davos notes, Jon might have the hots for her, and we’re shipping them, too!).

But she goes against Jon’s counsel anyway. Her tactic works — I mean, it really works: She has a Lannister cookout in the episode’s final moments — but it’s at the expense of Westeros’ perception of her. Cersei’s narrative against Dany is that she’s a foreigner coming from across the Narrow Sea with savages and fire-breathing dragons that will lay waste to the Seven Kingdoms. Anyone hearing about this battle secondhand will probably buy Cersei’s story even more.

Dany’s not doing herself any favors, either. As she says in next week’s episode preview, “I’m not here to murder. Bend the knee and join me, or refuse and die.” Um, that implies you are murdering anyone who doesn’t pledge fealty. It feels more and more like Dany’s being pegged as the series’ true villain, destined to be overcome by the same vices that tempted her father. She needs a PR consultant.

When we look back on the “loot train attack” sequence, will we see it as a turning point for Dany, when she got one step closer to truly becoming her father’s daughter? Perhaps, but right now, in the afterglow of Drogon’s flames and in the wake of watching a bunch of nameless dudes get burned to death, it sort of feels like it was all fireworks and not too much substance.

Mic has ongoing coverage of Game of Thrones. Follow our main Game of hub here.