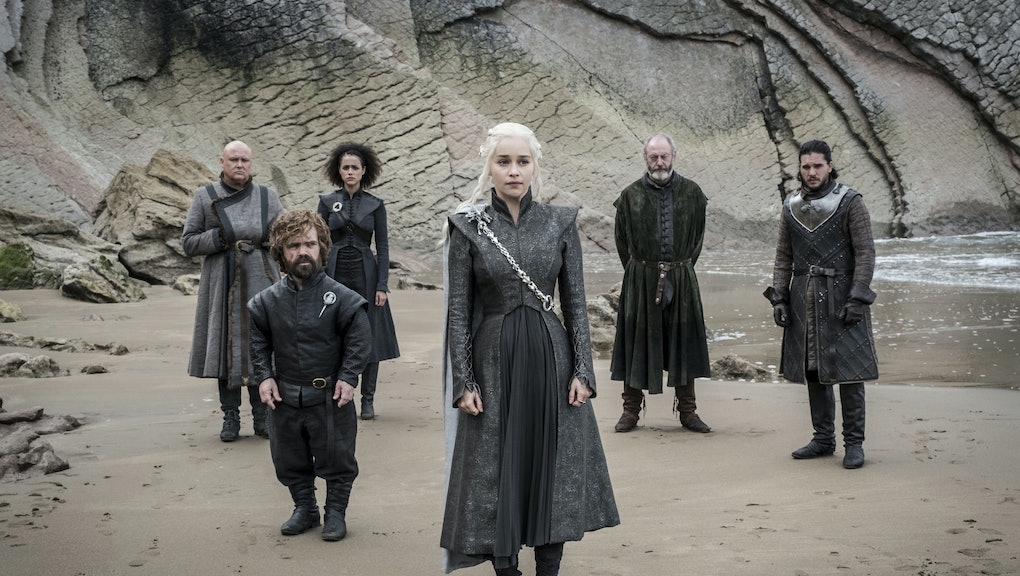 Daenerys doesn’t need your advice, Jon Snow, but thanks for the input

Despite infamously “knowing nothing,” Jon Snow sure does proffer his opinion a lot — especially in conversation with women. So it was a welcome change to see Daenerys Targaryen turn those tables on him in Sunday night’s episode of Game of Thrones, asking his advice, specifically, and then disregarding much of it.

“The Spoils of War” finds the Mother of Dragons frustrated on Dragonstone, feeling impotent after what should have been a momentous victory at Lannister stronghold Casterly Rock turned out to be a sort of decoy forfeiture. By leaving Casterly Rock largely unguarded, Jaime Lannister was able to utilize the bulk of his army to seize Highgarden — killing one of Dany’s powerful female allies in the process — and pilfer enough gold to repay Queen Cersei’s debts along with grain to help feed the people of King’s Landing through the coming winter.

Keenly aware that she needs to make a move or lose the war before it’s really begun, Daenerys declares she’s taking her dragons and flying for the Red Keep, where she’ll presumably burn down Cersei’s house. When Dany’s Hand, Tyrion Lannister, urges restraint, she turns to Jon and demands his advice.

Jon agrees with Tyrion, telling her, in short, to do nothing with the dragons: Raining fire upon the residents of King’s Landing makes her just another brutal ruler hell-bent on absolute power no matter the human cost. Don’t melt a city full of innocent faces, Jon says. Your reputation precedes you; be that different, more merciful ruler you’re rumored to be, rather than another iteration of what Westeros has already seen and suffered.

What Dany does next is not a flat-out disavowal of Jon’s advice; rather, she splits the difference, directing her Dothraki army at the Lannister forces on their way home from pillaging Highgarden. As the shrill cries of her troops crest over the horizon, and as Jaime herds his soldiers into formation, a dark and ominous shadow clouds the sky. Daenerys comes swooping in atop Drogon, the same dragon who rescued her in season five.

Cutting a flaming swathe through the Lannister front lines — an army she would have fought eventually, anyway — Daenerys then incinerates the wheat and grain haul that would have gone to feeding her enemy’s troops, as well as (presumably) the people of King’s Landing. What follows is the bloody, fiery “loot train attack” that sees Drogon injured when a massive arrow from Qyburn’s scorpion pierces his armpit.

All of which is to say Daenerys does not do nothing with the dragons. While she does not exactly ignore Jon’s advice, she definitely doesn’t heed it, either.

This must make a bit of a change for Jon, who has lately demonstrated some resistance to women’s recommendations. Already this season, we’ve seen the King in the North condescend to one powerful woman whose opinions, if history is any indication, he should take to heart.

Addressing a gathering of Northern lords in episode one, Jon announces he’ll forgive the houses that turned coat on the Starks to side with Sansa’s depraved former husband, Ramsay Bolton. Sansa objects, arguing that those lords’ castles should be given over to the families that have remained loyal to her house, and that he should set a precedent for punishing treason and rewarding fidelity.

Jon emphatically rejects that idea, and goes so far as to privately rebuke Sansa for questioning his authority in front of his subjects. In the next episode, Sansa counsels him not to travel south — as it’s a move that does not typically bode well for Northern kings — to see Daenerys, who’s just dispatched a raven summoning him to bend the knee. Emphasizing that the North needs obsidian from Dragonstone to fight the armies of the dead, Jon decides to make the journey, if not necessarily to bend the knee.

To be fair, he does leave Sansa in charge while he’s away, an indication that he is perhaps coming to trust her as an equal. And truly, it’s about damn time. In season six, Jon notably disregarded Sansa’s input when it came to fighting Ramsay, a man whose mind Sansa knew all too well. She warned Jon not to fall into the trap her sadistic ex would undoubtedly set, forcing Jon to throw the first punch in what would be the Battle of the Bastards. Jon did exactly what Sansa told him not to, and only won the battle (which cemented his ascendance to King in the North) because Sansa made other butt-saving plans with Little Finger’s army. Not only was she correct in her military assessment, she also secured their victory.

Perhaps because he’s older, perhaps because he’s a man, Jon seems to consistently underestimate his half-sister. It’s a shame, particularly because the bounty of fucked-up life experiences she’s accrued since parting ways with Jon have imbued her with crucial, personal insight into the inner workings of such notable adversaries as Queen Cersei herself. While he might be the only one south of the Wall who truly appreciates the grave threat the White Walkers pose to the seven kingdoms, Jon is outmatched in his understanding of Westeros’ various villains.

Given all that, it was pleasing to see a woman decline a man’s advice that she stay her hand, and instead strike a decisive, ravaging blow against her primary enemy — especially because it seems unlikely that Jon, whose track with being baited on the battlefield is not so good, would have taken his own advice had it been offered by someone like, say, Sansa.

Unfortunately, the victory may well be short-lived: closing with Daenerys stranded on a lake shore, face-to-face with Jaime and struggling to pull a heavy spike from Drogon’s side, the episode ended with the feeling that the Mother of Dragons may have gone a little too far. The ominous suggestion that the famously just and largely benevolent Khaleesi is perhaps a little power-tipsy, operating on revenge lust rather than reason, might point to an eminent stumble. It might also mean that Jon was ultimately right.

But for this week at least, we can enjoy a battle won because a woman decided to trust herself over a man and rode in on the back of a dang dragon. At least we have that.