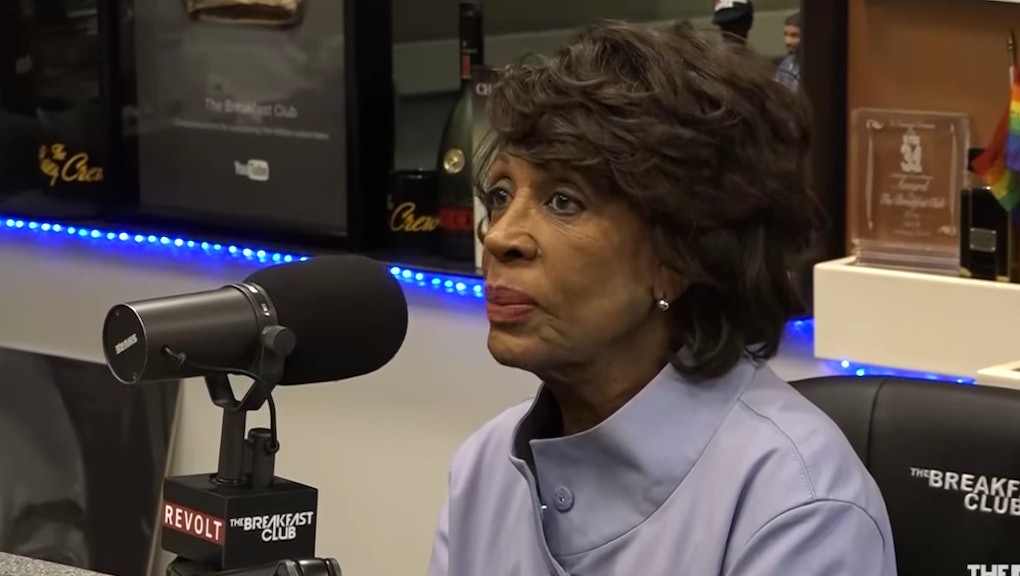 The ‘Breakfast Club’ asked Maxine Waters if she was running for president. Her response: “I’m good.”

On a Monday morning appearance on the Breakfast Club, host DJ Envy asked Rep. Maxine Waters (D-Calif.) whether she was considering a bid for the presidency in 2020. Waters’ response: “I’m good where I am.”

“I think I have work to do,” the California congresswoman demurred. “And let me just say this: I’m considered controversial and confrontational.”

Envy quickly interrupted to remind Waters that those two descriptors have been used to describe former President Ronald Reagan, a lion of the conservative right. Waters agreed and pressed on.

“What I need to do is what I do, and that is create the challenge, open up the discussion and encourage people. And let those who are willing to be a little bit more cooperative in the way they handle this complicated political system in order to move forward,” she said. “So I’m good where I am.”

Waters also fielded questions over a number of wide-ranging topics, using her appearance on the popular radio morning show as an opportunity to express her support for marijuana legalization on the federal level and to condemn President Donald Trump for condoning police violence.

Though her denial on Monday’s episode of the Breakfast Club fell just short of full-throated, Waters offered a more explicit denial on an August appearance on the View.

“That’s simply a rumor everybody,” Waters said. “I am not running for anything except the impeachment of Trump.”

Speculation over whether Waters would pursue a bid at her party’s nomination began in earnest when the congresswoman made a surprise trip in July to New Hampshire, a hotly contested swing state considered by many to be one of the requisite stops along the campaign trail — even before a politician formally announces their candidacy. On that trip, Waters was the featured speaker at the Strafford County Democratic Committee’s annual picnic.

Ahead of that appearance, Waters told the Daily Caller that she would run for president if millennials wanted her to run.

“I’m not running for anything but my own seat,” the congresswoman told the conservative outlet. “If the millennials want me to do it, I’d do it, though.”

She later told the Hill that she was joking when she made those remarks.

Waters has enjoyed consistent viral fame as the arguable voice of the so-called establishment resistance to the beleaguered administration of Trump. Most recently, a video of Waters aggressively “reclaiming her time” during a House Financial Services Committee confrontation with Treasury Secretary Steve Mnuchin became an instant meme.

In a video for NowThis Politics, Waters embraced her fame with young people, telling the camera that she was “having the time of her life with millennials.”