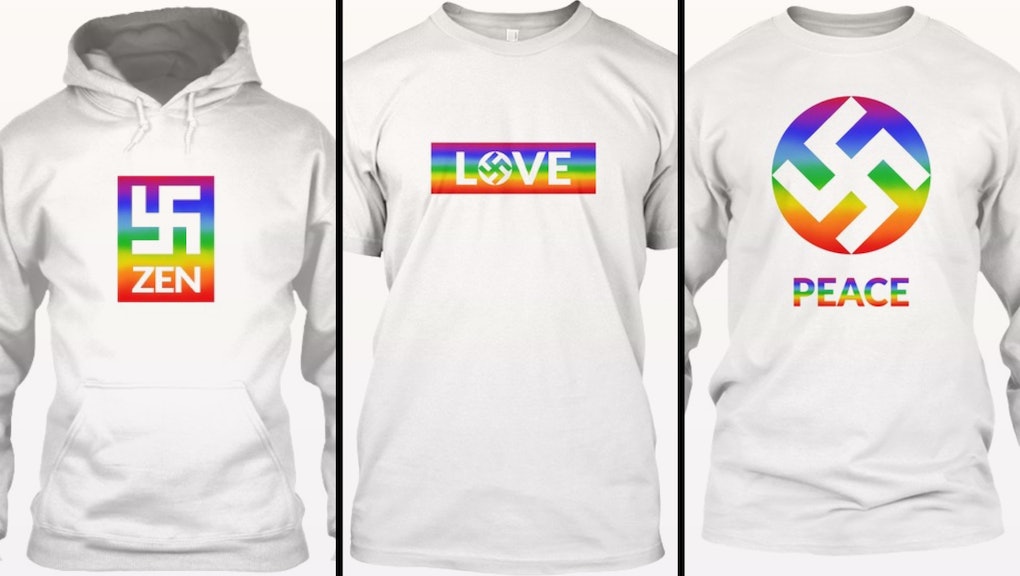 No, the swastika will never be fashion

After attempting to turn swastikas into a fashion statement, one European design company has pulled and discontinued production on the entire line after facing fiery backlash.

With an intent to “reclaim the symbol,” KA Design had mocked up a slew of T-shirts and sweatshirts all emblazoned with the swastika symbol, the most recognizable icon of Nazi propaganda, ironically against a rainbow background, with words like “Peace” and “Zen” and “Love” written below it.

It didn’t go over well. When KA Design introduced their idea of a “new Swastika” with a Facebook video (which has been viewed more than 1.9 million times), people were not hearing it.

“This is absolutely disgraceful. This sign represents murder, hatred, rage and psychotic thinking and should not be displayed for decorations,” one commenter wrote in. Another: “There’s no point trying to ‘reclaim’ the swastika. We can make new symbols of peace, love and hope. Not everything has to be reclaimed, some things need to just burn and be left in the past.”

Then, when KA’s designs were spotted on the the online retailer Teespring, more outraged ensued.

The executive director of the Israeli-Jewish Congress, Arsen Ostrovsky, even spoke out against the sale of KA Design’s shirts. “Do you not realize how obscene and offensive this is?” Ostrovsky asked on Facebook. “This is not art or free speech. It’s disgusting and deeply hurtful.”

Teespring ultimately decided to disable all of KA’s garments from its site, leaving KA unable to sell any merchandise at the moment.

According to KA though, they’re still on a mission to reclaim the symbol. “We really enjoy the swastika,” the KA Design team said in an email to Mic. “Not because of any of the meanings associated with it, but because of the shape and of how it looks. However, the strong bond between the swastika and Nazi values was unbreakable. We didn’t feel free. For the right reason. So we ended up using this symbol with the aim of sharing its opposite values: love, peace and freedom. Our project wants to express the victory of love and humanity against hatred and Nazism in general.”

It’s true that the swastika wasn’t always a symbol of hate. Per the United States Holocaust Memorial Museum, the word “swastika” derives from the Sanskrit “svastika,” which means “good fortune” or “well-being.” For thousands of years, it was a sacred symbol in religions like Hinduism and Buddhism. But when the Nazis picked that symbol and turned it 45 degrees, it became a symbol associated with hate and genocide, which many people understandably do not want to see on a T-shirt or hoodie. In countries like Germany and Austria, the swastika is banned.

“We understand and accept every criticism,” the KA team said. “However, we didn’t expect so much hate from people. Our project goes strictly against Nazi values and doesn’t in any way support them. But a large number of people called us Nazi. We ask forgiveness to those people. We want to evoke love with our project, not hatred. We don’t want people to do the same mistake the Nazis did. We don’t want people to hate and discriminate someone or something without even fully knowing or understanding.”

But one of the problems that remains is that intent can’t be worn on one’s sleeve. KA cannot control who buys these T-shirts or the intent they really have. To someone who believes in Nazi ideals like white supremacy, they may want to buy this shirt and wear it around to remind people of the horrors of the Nazi regime and the Holocaust. They could wear it as a way to trigger and threaten communities who feel united with the millions and millions who were targeted by Nazis in the 20th century, and continue to be targeted by similar hate groups today.

All of this doesn’t worry KA Design though. They apparently don’t really care if neo-Nazis come to embrace their T-shirts.

“We wouldn’t care,” the KA team said in a statement, which they also provided for Dazed. “The aim of this project is not to generate profit, whatever the source of the money. Absolutely not. We think the message on our apparel is clear: peace, love and freedom win over hatred, war and prejudice. If some kind of neo-Nazi goes out wearing our shirt, he will raise the same kind of questions and discussions as a communist wearing the same shirt. That’s why we don’t care about who buys the shirts.”