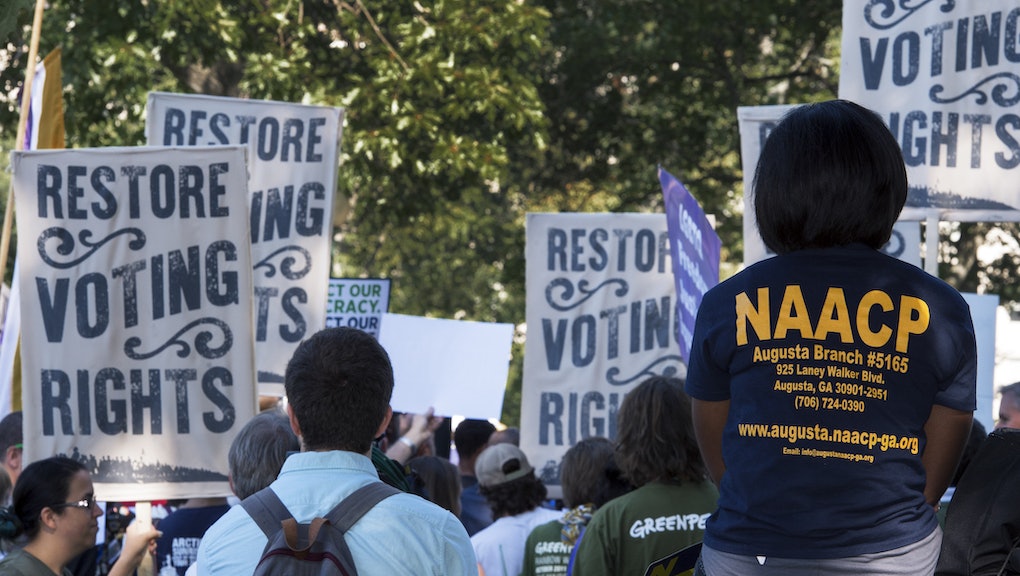 CA Secretary of State Alex Padilla: 52 years after its passage, Voting Rights Act is “under assault”

On the 50th anniversary of the Voting Rights Act of 1965, which paved the way for African-Americans to participate in the electoral process, then-President Barack Obama invited California Secretary of State Alex Padilla to Washington.

Padilla and others spent the entire day commemorating that national milestone at a summit on preserving the right to vote and improving voter enfranchisement.

“What a concept, right? But just two years later, what a difference a president makes,” Padilla says in a new video op-ed filmed exclusively for Mic in which he marks this week’s 52nd anniversary of the VRA’s signing. The landmark legislation, says Padilla, “is under attack. It’s under assault.”

Padilla is one of the fluctuating number of state election officials who refused to cooperate with repeated data requests from President Donald Trump’s Commission on Election Integrity.

Other states are complying with at least part of the panel’s request for detailed information on all registered voters, including full names, voting histories and criminal records.

Trump, who claimed without proof that millions of votes were cast improperly in the 2016 general election, created the commission to investigate “voter fraud,” although it is also examining suppression and other topics.

[The act] was signed after years and years of people organizing, of people marching, of people shedding blood, sweat, and tears for the right to vote. What’s more fundamentally patriotic than that, an American citizen being able to register to vote, cast a ballot, help determine who your representatives are and the future of your community?

Then-President Lyndon B. Johnson’s signing of the VRA on Aug. 6, 1965, paved the way for African-Americans to vote, although some states continued to try to keep nonwhites from the ballot box.

Padilla has been outspoken against the presidential commission, calling it, as have others, a “sham” meant to railroad through tougher voting restrictions.

Monday email inquiries to the election commission staff and representatives of the panel’s leaders, Vice President Mike Pence and Kansas Secretary of State Kris Kobach did not immediately elicit responses.

Members of the panel who claim fraud is a real issue and who support data collection have pointed to the failure of critics in multiple legal challenges, some of which are still pending.

Padilla and like-minded officials don’t place the blame for a threat to the VRA solely on the presidential panel; they also point to action by the Supreme Court, which they claim has weakened the legislation and encouraged new waves of state laws regulating voting.

Some of those laws include the requirement of photo ID and the purging of registered voters from the rolls. Both are considered bulwarks against fraud by their proponents.

To Padilla and his allies, however, they’re naked attempts to limit access to the polls as much as possible.

“We’re better than that, and we’re going to keep resisting these efforts,” he said.