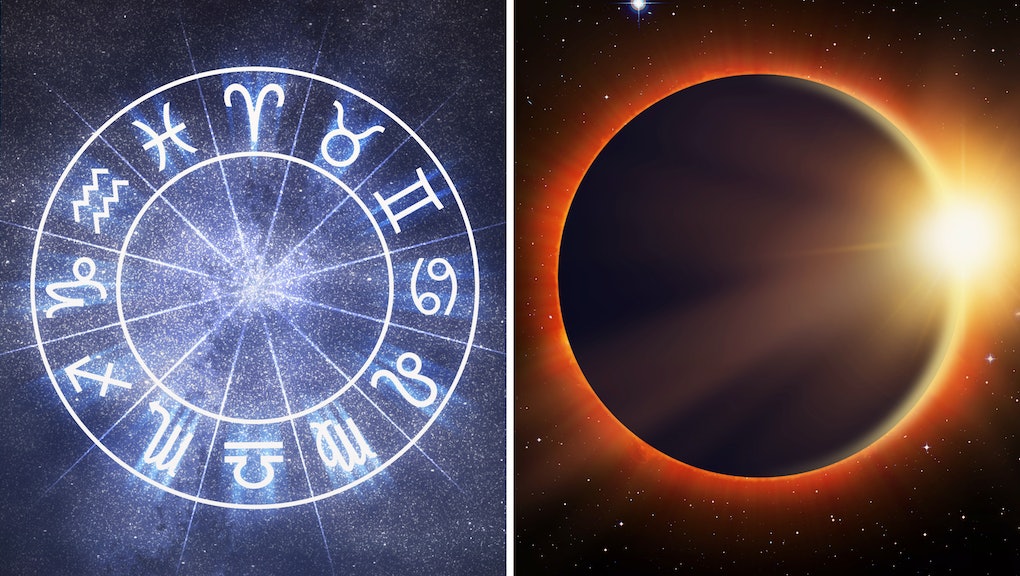 You’ve got your eclipse glasses, sunscreen and bottled water packed and ready to go. Your travel plans are set in stone. If you’re staying put somewhere outside the path of totality, you know exactly where to set up camp for the best views or how to livestream the event online. You’ve read so much about what happens during a total solar eclipse, you swear you could quit your job and go to work for NASA tomorrow.

From a practical standpoint, you’re probably ready for the Great American Eclipse on Aug. 21. And while you’ve undoubtedly heard the occasion will be a “life-changing event,” are you prepared for what that means psychologically and spiritually?

Mic spoke to astrologers and an eclipse chaser, all of whom agreed the eclipse won’t just be about what you’ll see, but what you’ll feel — and that despite your likely skepticism, harnessing the eclipse’s effects long after the temperature returns to normal and the sun emerges from its temporary hiding spot is how the event really becomes a “once-in-a-lifetime” affair.

Below are their tips for making the most of this phenomenon.

For eclipse chaser and author Clint Werner, his first time watching a total solar eclipse set him on a path that was indeed life-changing. “After experiencing totality and first gazing into the ethereal glow of the corona, what I call the light of life, I knew I had to do it again,” Werner said in an email interview.

This eclipse-chasing compulsion vastly expanded my perspective on the world and life and the variety of human cultural expression by drawing me to places I would have never thought of traveling to. ... I strongly feel that experiencing a total eclipse of the sun can change [one’s] consciousness.

Science seems to be on Werner’s side. In a May 2015 study published in the Journal of Personality and Social Psychology, researchers from the University of California, Irvine, determined that experiencing awe — defined by study authors as “that sense of wonder we feel in the presence of something vast that transcends our understanding of the world” — encourages ”altruism, loving-kindness and magnanimous behavior.”

And what is a total solar eclipse if not awe-inspiring?

Our investigation indicates that awe, although often fleeting and hard to describe, serves a vital social function. By diminishing the emphasis on the individual self, awe may encourage people to forgo strict self-interest to improve the welfare of others. When experiencing awe, you may not, egocentrically speaking, feel like you’re at the center of the world anymore. By shifting attention toward larger entities and diminishing the emphasis on the individual self, we reasoned that awe would trigger tendencies to engage in prosocial behaviors that may be costly for you but that benefit and help others.

Just in case science isn’t enough, heed the words of astrologer and psychic medium Suzie Kerr Wright, who said the celestial event offers an opportunity for “rebirth” and the chance to gain new perspective on our motivations and relationships. Emotions will “run the gamut” both leading up to and during the eclipse, she explained.

“The energy is on your side,” Kerr Wright said. “Those who are unaware of their limitations may become angry and combative, or feel like they are not being heard and lash out in frustration. Many of us will realize that what we thought we were hiding from others is, in fact, not hidden at all. But with this new knowledge, one door closes and another can open and show us a life we never imagined.”

The bottom line? Though you may scoff at the notion of the eclipse as being anything more than an excuse to take a vacation day, keeping an open mind about your capacity for change come Aug. 21 couldn’t hurt.

2. Surround yourself with the right people.

This bit of advice is easier to take, especially for astrology doubters.

While the “where” of viewing the eclipse is obviously crucial — inside the path of totality, preferably in an attractive and peaceful setting with a view unobscured by tall trees or buildings — whom you watch it with is no less important, according to Werner.

“This is a profound event, and sharing it with friends and family will make it even more of a milestone experience,” Werner said. “Being with the people who love and encourage us can only magnify the sense of joy and wonder that an eclipse brings. It is also amazing to hear the chorus of rising whoops and screams and guttural moans as the moon’s shadow sweeps over you.”

“Sometimes you can hear daylight birdsongs stop and night birdcalls begin [before totality],” Werner said. “The quiet also gives one space to mull over the event and its metaphysical significance. I like to think on how unlikely it is that we even exist and how, for me, the sight of totality is a cosmic mandala of intentionality, a symbol that life has purpose.”

In other words, put down your smartphone.

“Whatever people do these days, they have a phone, they’re recording things,” Russo said. “I hear a lot of people say they’re going to [livestream] it from their location — which is wonderful, but when you’re focused on multitasking, it takes away your ability to get fully lost in the moment.

“Totality is so brief. Two minutes, 41 seconds is the maximum totality for this eclipse. So much happens in that moment, so much happens above you, around you and within you,” she said.

4. Leave the psychedelics at home — weed might be OK, though.

If you’re thinking of eating mushrooms or dropping some LSD to heighten your eclipse encounter, think again. Werner, who wrote Marijuana Gateway to Health: How Cannabis Protects Us From Cancer and Alzheimer’s Disease, doesn’t recommend using hallucinogens during the eclipse.

“I am no moralist with regard to the use of mind-expanding drugs,” Werner said. “I saw over 300 Grateful Dead shows, so that speaks for itself. But as someone who has had positive experiences with psychedelics, I discourage people from using them during the eclipse. I do this because each experience, the psychedelic and totality, is mind- and perception-altering ... and the effects can compete with each other for attention, thus diminishing aspects of each.

“Experiencing totality is weird enough without viewing it through a psychedelic lens. The changes in nature are both profound and subtle, and you don’t want to miss anything. You can trip later,” he said.

However, regular weed smokers needn’t fret: Werner gives you the all-clear to forge ahead with your normal marijuana consumption.

“For regular users, a little cannabis can really enhance the eclipse experience,” Werner said. “Totality passes far too quickly, and the [perception of the] slowing of time can be beneficial. Some types of marijuana also enhance visual acuity so that the show is even more enthralling. If one is cannabis-naïve, I suggest trying it another time because the first high can be overwhelming. Anything that dulls the senses, alcohol or narcotics, has no appeal for me, especially during an eclipse.”

So you kept an open mind, got a little high and experienced an event 99 years in the making surrounded by the people you love. Now what?

According to Kerr Wright, it’s only the beginning.

“With this supercharged eclipse right over us, many Americans in its path will find themselves turning over a new leaf, dramatically changing their lives or entering uncharted territory,” Kerr Wright said. “The best way to maximize the benefits [of the eclipse] would be to avoid judgment of yourself. Focus on increasing your confidence, bringing forth what makes you shine, what brings you the greatest joy. I know everyone says this all the time, and yes, we should always do these things. But during this powerful energy, we have an amazing opportunity to initiate a new cycle in our lives that will last for a long time.”

If you’re looking for more details about what you can expect once Aug. 21 has come and gone, check out these astrological insights written exclusively for Mic by Virginia Mason Richardson of Horoscope.com:

This new moon is on steroids, and it’s not leaving anyone undisturbed. Not only is this moon special because of the eclipse, but it’s also the second Leo new moon in under a month. This is the only time this year that a new moon shows up in the same sign twice, connecting this moon to the one from July 23. Whatever started then has been shaken and stirred over the last few weeks, and it’s all been leading you to this final eclipse of the year.

These new moons — and everything in between — are initiating a significant next step. Whether it’s a new project, relationship, home or massive shift in your perspective, you are being called to move forward. That call may sound more like an unignorable shouting than a gentle holler, but I swear, it’s shouting at you with the best of intentions.

If you’ve been letting other people dictate your life, then this eclipse is going to make you look at what you truly want and demand that you go after it. If you’ve been following your inner voice all along, then now is a time when you’re likely to receive a reward for all of your hard work.

You’ll be feeling strong. Insecurities will subside. Confidence will soar. And by honoring what makes you you, this eclipse will help you grow into exactly who you’re meant to be.

And for zodiac sign-specific horoscopes for the month of August, go here.