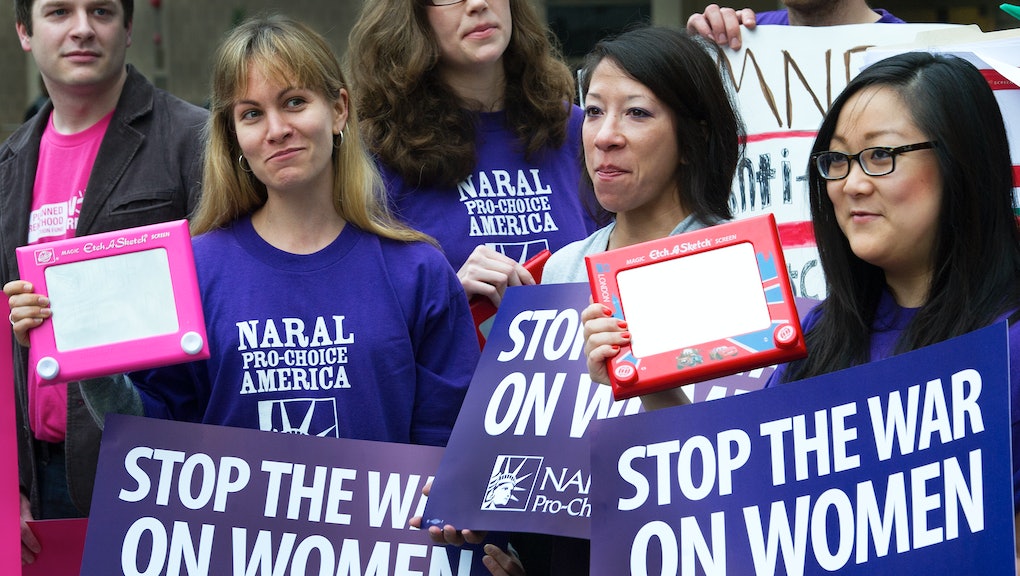 Last week, Democratic leaders distanced themselves from any requirement party-backed candidates be pro-choice. Progressive groups pushed back, with NARAL Pro-Choice America and Democracy for Action releasing principles saying progressives should not support any candidate who would vote to restrict abortion or contraception access.

Mic contacted members of Congress who have built reputations as progressive leaders or leaders in the reproductive rights arena. We asked whether they believe the Democratic Party should only support candidates who are pro-choice.

Of the 19 members of Congress that Mic contacted, only four responded. None of those four explicitly said candidates backed by the Democratic Party must be pro-choice.

These senators and representatives often draw deep support from groups like NARAL, DFA and other progressive groups that joined the statement, including MoveOn, Planned Parenthood and Emily’s List. (A full list of who Mic contacted appears at the end of this story.)

Luján called for Democrats to support candidates who “fit the district” — even if that means backing someone who is personally pro-choice. Party leaders have argued Democrats may need to support pro-life candidates to win back the House and Senate — but they have made no suggestion they will back off the party line support of reproductive rights. In 2016, the party approved a Democratic platform that was the most pro-abortion rights party platform ever.

Those comments have rankled the progressive groups. “We recognize that over the last decade there has been a massive erosion of access to abortion and attacks on contraception and we cannot back away from this fight without abandoning people and undercutting core constituencies in our base,” the principles, which were announced last week, read.

But when contacted by Mic, progressives and women’s rights advocates in the House and Senate largely did not criticize party leadership for opening the door to more pro-life Democrats. (Only two House Democrats are members of the Congressional Pro-Life Caucus.)

The silence is in line with voter attitudes: Only 28% of Democrats in a recent YouGov poll said the party should exclusively back candidates who support abortion rights. But it goes against the public critique progressive grassroots groups have pushed for months — groups that are among the biggest supporters of elected officials contacted by Mic.

No Democratic members of Congress told Mic party-backed candidates must be pro-choice.

Rep. Mark Pocan (D-Wis.) came the closest, in correspondence with Mic, to being supportive of an abortion “litmus test.”

“Mark has said you can’t stop anyone from running as a Democrat, but that support should not be given to people who are Democrats in name only,” Ron Boehmer, a spokesperson for Pocan, wrote in an email. “Our core values matter, including support for a woman’s right to choose.”

When asked if that meant Pocan is in favor of withholding Democratic Party support for candidates who are not pro-choice, his spokesman said, “We’ll let you infer.”

Pocan is co-chair of the Congressional Progressive Caucus. A spokeswoman for Rep. Raúl Grijalva (D-Ariz.), the caucus’ other co-chair, did not respond to repeated requests for comment. Rep. Pramila Jayapal (D-Wash.), the caucus’ first vice chair, left the door open to certain pro-life Democratic candidates.

“Candidates who do not personally support abortion but will commit to not doing anything to undermine a woman’s constitutional rights should be welcomed as Democratic Party candidates,” Jayapal said in a statement to Mic. “There should be space in the party for those who make different personal choices but understand their obligation to women’s constitutional rights.

The website for the Congressional Pro-Choice Caucus, co-chaired by Reps. Dina DeGette (D-Colo.) and Louise Slaughter (D-N.Y.), says of abortion rights, “We won’t let anti-choice extremists roll back the clock on these hard-fought protections.”

But spokespeople for DeGette and Slaughter did not return repeated requests for comment on whether Democrats should only support pro-choice candidates.

Last week, amid the latest kerfuffle about Democrats and abortion, Sen. Kristen Gillibrand (D-N.Y.) tweeted that the party should not compromise.

When asked for clarification, a Gillibrand spokesperson said the “tweet means exactly what it says.”

“She believes we can take back the House and Senate without compromising women’s health and will recruit, mentor and support strong pro-choice women candidates,” said Whitney Brennan, a spokesperson for Gillibrand. Brennan did not respond to a follow-up question about whether that means Gillibrand believes the party should only support pro-choice Democrats.

In January, Rep. Lois Frankel (D-Fla.) spoke with Roll Call at the Women’s March on Washington. The co-chair of the bipartisan Congressional Women’s Caucus told a story of when, at age 15, she found a friend who had received a back-alley abortion “bleeding to death.”

“We’ll resist like hell if they try to take us back,” Frankel told Roll Call of Republicans.

A spokesperson for Frankel’s office did not respond to repeated requests for comment for this story.

In January, the Women’s March on Washington listed “reproductive rights” as one of the core principles of the march. Female senators, including Kamala Harris, a then-newly elected legislator from California, reiterated their pro-choice positions to the hundreds of thousands of people at the march.

“We deserve a country ... with access to health care, including a safe and legal abortion protected as a fundamental and constitutional right,” Harris said — a line that drew cheers.

Her office did not respond to a request for comment.

A spokesperson for Sen. Elizabeth Warren (D-Mass.), a star among progressive groups and a leading 2020 contender, said Warren’s position from a few months ago still stands.

“I am strongly pro-choice,” Warren said in April. “I recognize that not all of my colleagues agree with me. I’ll do everything I can to persuade them, but they are my colleagues, and that’s just how it is with the Democrats.”

Here’s a list of the elected officials contacted by Mic. These members of Congress all have pro-choice voting records.

Rep. Maxine Waters (D-Calif.), top Trump critic in the House and a congresswoman since 1991. No response.

Sen. Elizabeth Warren (D-Mass.), vice chair of the Senate Democratic conference up for re-election in 2018. Endorsed by MoveOn. No on “litmus test.”

Sen. Sherrod Brown (D-Ohio), two-term senator up for re-election in 2018. Endorsed by MoveOn. No response.

Sen. Tammy Baldwin (D-Wis.), secretary of the Senate Democratic Conference up for re-election in 2018. Endorsed by MoveOn. No response.

Sen. Chris Murphy (D-Conn.), first-term senator up for re-election in 2018. Endorsed by MoveOn. No response.

Sen. Mazie Hirono (D-Hawaii), first-term senator up for re-election in 2018. Endorsed by MoveOn. No response.

Sen. Kamala Harris (D-Calif.), first-term senator who spoke at the Women’s March on Washington. No response.