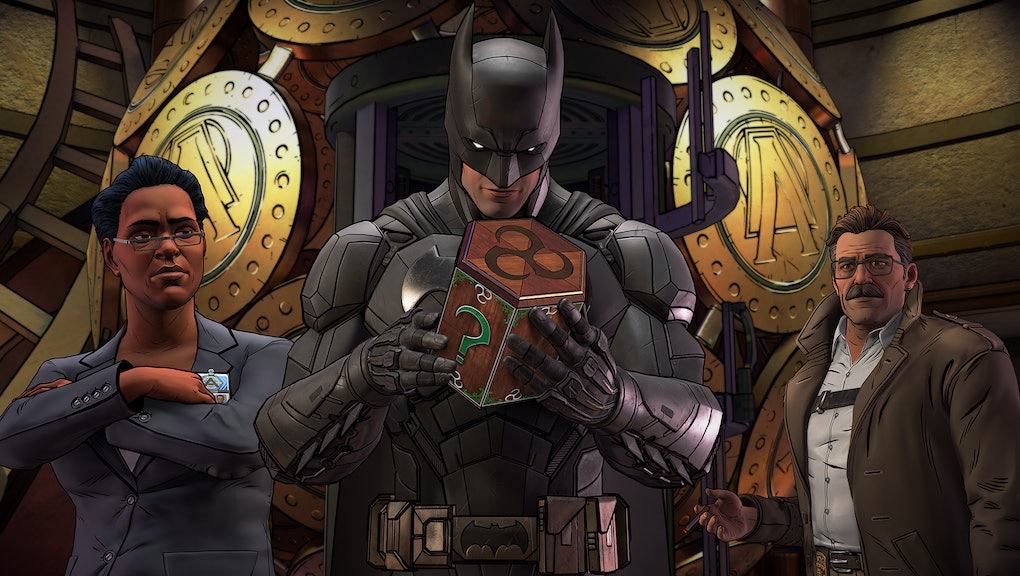 ‘Batman Telltale Season 2’: We talked to Telltale about their fresh take on your favorite DC villain

Superhero video games typically fall into one of two categories: single-player action-adventure (like the upcoming Spider-Man title for PS4) or a player-vs-player fighting game (like Injustice 2). So when Telltale took on Batman last year, their choose-your-own-adventure story disguised as a video game was a refreshing take on Gotham’s Dark Knight.

Batman: The Telltale Series featured a mix of new characters and familiar faces, along with enough plot twists to make players dizzy. Now, the developer is back with Batman: The Enemy Within, picking up right where the original left off while adding new combat options and tons of other welcome improvements.

Mic talked to Telltale narrative designer Emily Grace Buck and executive producer Sean O’Connor about their take on Bruce Wayne, the Joker and more in Batman: The Enemy Within.

(Warning: Spoilers for the original Batman: The Telltale Series lie ahead.)

Mic: The story is so integral to a game like Telltale’s Batman. How do you tell a story that’s been told so many times while keeping things fresh?

Emily Grace Buck: We spend weeks in rooms, brainstorming and thinking about the plot of the game: How we’re going to make the player care about these characters, what types of interactions they want to experience, how they can affect the story. Even before I open up the game instance, the number of months on a project you’re not writing any kind of code, we’re not writing specific dialogue yet, we’re thinking about the overall structure. We’ll create literal flowcharts of the scene, all with different possibilities of where it could go. After that, we iterate constantly.

Sean O’Connor: One of our big things we tried to do was not rehash a story that’s been told. With Batman it’s a challenging thing. There’s 75 years of canon. In season one you saw things like Bruce Wayne’s parents being corrupt, which is obviously not normal canon. That, [plus] how we changed Penguin [and] how we created Lady Arkham. All these things keep the story fresh.

Is there ever a struggle between staying true to the comics and using the characters how you want to?

SO: We definitely strive to stay true to Batman and all the great stuff that came before us. We don’t want to repeat everything that’s been done so we take selective things and put a little twist on them. Vicky Vale and how we created our own character in season one with Lady Arkham was pretty different. Then there are slightly smaller things that aren’t big, blockbuster-sized plot twists. The Riddler in season two isn’t this campy guy with question marks all over his suit, but a mad genius and much more sadistic.

EGB: Some are subtle. The way Alfred treats Bruce, for example, is different than in other stories, and Bruce will call Alfred “Al.” In our game, when Bruce is in the Batcave it’s his moment to decompress between some of the bigger, crazier missions. Alfred is the person you confide in most in the game and he knows you best. Allowing him to be a little more familiar than they previously have been lets the players know that this is a moment of downtime with someone who cares about you. Then we can build on those relationships, which is really core to our game.

What changes to Telltale’s Batman, small or big, are new to the game in this sequel?

SO: We’re always trying to get better at everything we do, and refine things and make it tighter. So one place we did that is in the investigation mechanic. When you’re piecing together a crime, there’s also a second layer where you have to put things in chronological order, giving it more depth.

Then there’s new gadgets like the Bat Anchor which lets you tether two guys together and make them slam into each other, or it stops obstacles from falling and crushing people. In the new game, there are choices during combat sequences. One of the choices involving the Bat Anchor determines how you save a hostage: Do you pull the guy’s gun away or pull a hostage away? These choices, even during combat, can affect the characters within the story.

I love how the end of each episode shows the percentage of people that went with each choice. Do you take that into account when crafting the story?

EGB: Yes! Absolutely. We look back at previous episodes to see what people chose, but that’s also something we think about while we’re making the episode. We ask, “Is this a choice that’s going to come across [where] 50% of people go one way and 50% go another? Or are we assuming this is going to be more of a 75% and 25% option?” Sometimes you even go for the 95% and 5% in scenes like season one’s romancing of Catwoman.

That said, we try to always make sure that every choice a player makes pays off. So even if there’s a question that is more of a 75% and 25% split, we don’t take away from the experience of those players in the 25% group. Though, if many more players chose one branch, that lets us know quite a lot about what people want to see.

SO: There’s one really awesome combat choice at the end of season two, episode one that everyone is loving that I won’t spoil. You’ll just have to play and see what it is. Another thing that’s new in Enemy Within is the choices you make have a huge impact on who the Joker becomes.

Can you tell us more about what we’ll see from the Joker this season?

SO: We’re doing a fresh take on not only how John Doe becomes Joker, but what kind of Joker he is when he gets there. He’s still John Doe at the start of this season, he’s going to meet up with you again at the end of episode one and you’re going to start to figure out what he’s doing. He says he has some interesting new friends he wants you to meet. And you may or may not owe him a favor based on what you did in season one — all your choices from season one can be imported into this game.

EGB: In the first season you meet John Doe in Arkham and he looks a bit like the Joker you’ve seen before, though he hasn’t committed any atrocities yet. He’s a bit more naive, yet is very interested in you and what you have to say. So that story decision gave us a lot of fertile ground on which to build choices around him that might influence who he might become.

One way that we’re trying to keep things most different with Batman: The Enemy Within is that we started with our version of the Joker. We’re taking a number of villains that most Batman fans know and trying to find ways to put a slightly different spin on them so players can really experience playing their own narrative.

SO: We only change things that serve the narrative. We’re not looking to alter everything you know about Batman, just changing select things to make a really kick-ass story.

Check out the latest from Mic, like this what we learned when we chatted with seven booth models at E3 2017 about expo culture. Or this deep dive into the cultural origins of Gamergate. Also, be sure to read this essay about what it’s like to cosplay while black, a roundup of family-friendly games to play with your kids and our interview with Adi Shankar, producer of the animated Castlevania Netflix series.