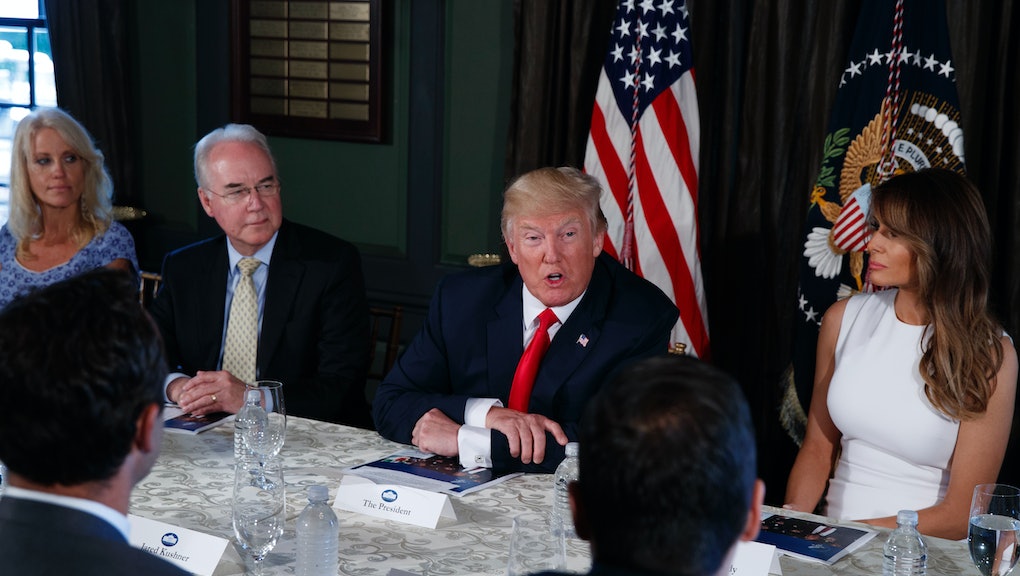 Speaking after a briefing on the national opioid epidemic, Donald Trump told reporters, “The best way to prevent drug addiction and overdose is to prevent people from abusing drugs in the first place.”

There was some speculation that Trump, speaking from his Bedminster, New Jersey, golf course on Tuesday, would declare a national state of emergency and put the full support of the federal government behind fighting the opioid crisis.

Last week, a presidential commission urged Trump to issue that declaration to stem the deaths of 142 people a day who die from drug overdoses. It’s unclear what changes, if any, will result from Trump’s Tuesday announcement.

Trump stressed a continued focus on punishing drug dealers and tightening immigration to prevent drugs from entering the U.S. Famously, Trump launched his presidential campaign by saying “Mexicans” were “bringing drugs” into the country — something he promised to stop.

Declaring a state of emergency on opioids would immediately open up federal dollars for drug addiction treatment and allow Medicaid to pay for inpatient treatment at facilities with more than 16 beds, greatly increasing the capacity of the health care system to treat those with opioid dependencies.

Trump’s commission, led by New Jersey Gov. Chris Christie, said that move “has been urged by every governor” and will “immediately open treatment to thousands of Americans in existing facilities in all 50 states.”

A member of the commission told PBS the declaration would increase the supply of drugs like methadone and Vivitrol. It would also pay to educate doctors about when they should prescribe painkillers.

Between 1999 and 2015, more than 560,000 people died from drug overdoses, a toll that is trending upwards. It is estimated 33,000 people died from opioid related causes in the U.S. in 2015. Yet the sale of prescription opioid medications continues to grow. It already constitutes half the prescription pain market, according to Informa Pharma Intelligence, and is projected to reach $18.4 billion by 2020.

Trump’s briefing was previewed with a morning tweet from Trump, followed by a subsequent message from Vice President Mike Pence. Pence called for “new resources” to combat the epidemic ahead of Trump’s meeting. Trump did not explicitly announce any new resources on Tuesday.

Trump — who recently took heat for reportedly calling New Hampshire a “drug-infested den” — has been learning the ins and outs of health policy on the job, suffering a defeat at the end of July when Senate Republicans failed to advance a health care bill to repeal and replace the Affordable Care Act. That bill would have cut hundreds of billions of dollars from Medicaid, which is crucial in treating people with addiction.