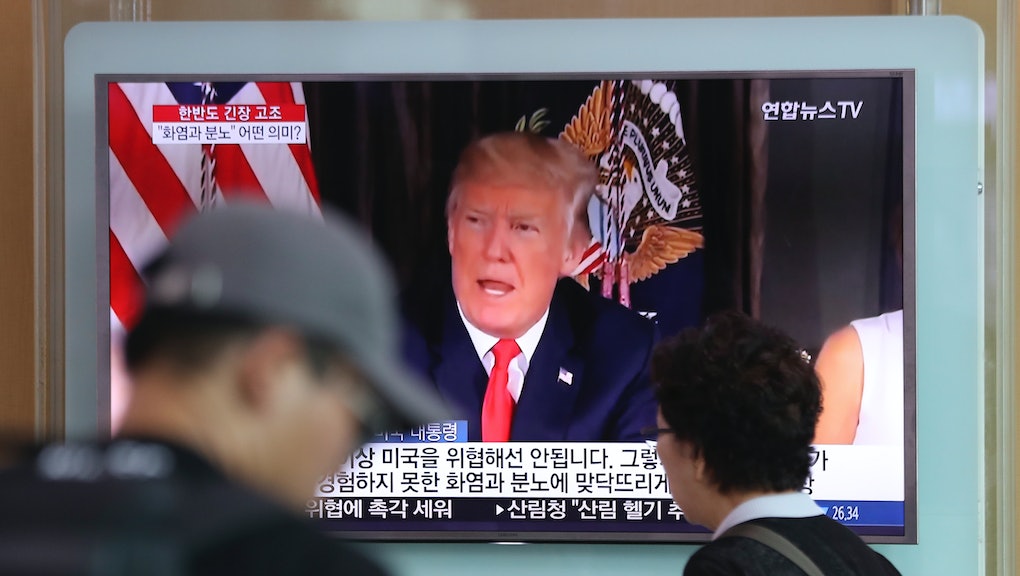 US-North Korea tensions are nothing new. Trump’s “dangerous” rhetoric is.

President Donald Trump on Tuesday said from his Bedminster, New Jersey, golf club that further threats from North Korea would be met with “fire, fury and frankly power the likes of which this world has never seen before” — prompting the isolated nation to announce it is considering a strike on the United States territory of Guam.

Secretary of State Rex Tillerson stood by Trump’s heated comments, saying the president had delivered a “strong message to North Korea in language that Kim Jong Un would understand” and that there was no imminent threat to the U.S. But others decried Trump’s aggressive rhetoric, concerned that his from-the-hip remarks could worsen the dangerous situation on the Korean peninsula.

“The president’s provocative response makes the risk of conflict all the more likely,” Ned Price, former senior director of the National Security Council, told Mic in an email. “And the inescapable truth is that even a conventional spark on the Korean Peninsula could quickly escalate, putting tens of thousands of U.S. service members as well as our regional allies at risk.”

Tensions between the U.S. and North Korea, of course, are nothing new — several generations of American leaders have done a delicate dance in navigating the complicated relationship. But Trump, unpredictable and lacking in experience, is a new factor — and it’s not yet clear just what impact his rhetoric will have as the two countries engage in another round of nuclear chicken.

U.S. and North Korea: Tensions decades in the making

North Korea’s nuclear provocations may be one of the major foreign policy problems of our time, but the story goes back much further — more than six decades, in fact, to the Korean War in 1950, when the U.S. stepped in to fight North Korea with the South.

That bloody conflict — which the U.S. saw as an attempt to prevent the spread of communism through “containment” — left North Korea in ruins. U.S. involvement is considered the “American original sin” by the North Korean government to this day, Robert E. Kelly, a professor of political science at South Korea’s Pusan National University, told CNN in July.

By the end of the war in 1953, millions had died and the U.S. had dropped about 635,000 tons of explosives on North Korea, according to CNN.

The Korean conflict came at the onset of the Cold War between the U.S. and the Soviet Union: a stand-off characterized by a tense arms race and occasional threats to devolve into full-scale, catastrophic nuclear warfare.

Perhaps the most prominent threat of nuclear war came during the Cuban missile crisis in October 1962, when the U.S. — which a year earlier had made an ill-fated attempt to overthrow the Soviet-aligned communist government of Fidel Castro on the island — discovered Soviet medium-range ballistic missiles being assembled on Cuba, just 90 miles off the coast of Florida. President John F. Kennedy, seeking to get rid of the missiles without turning the Cold War hot, established a blockade around the island to prevent more missiles from being delivered and ordered the USSR to remove those already there.

While the stand-off on multiple occasions nearly escalated into full-scale conflict — including when a U.S. military observation plane was gunned down over Cuba — Kennedy and his Soviet counterpart, Nikita Khrushchev, struck a deal to end the crisis within a few weeks of its beginning.

“The real lesson of the Cuban Missile Crisis wasn’t at all that the two nuclear powers had gone eyeball to eyeball and one side had knuckled under to the other,” commentator Chris Matthews wrote in the New Republic in 2012. “It was that both sides were able to get their eyes wide open to the consequences of what was being risked and both sides were able to deliver us from the worst human-made disaster in history.”

There were three notable conflicts with North Korea and the U.S. during this time.

The first occurred in 1968, when North Korea captured the USS Pueblo — a Navy intelligence ship the U.S. said was in international waters. A crew of 83 Americans were held in Pyongyang on espionage charges for 11 months, when the U.S. admitted to being in North Korean waters and vowed not to do so again.

But tensions remained high between the two countries, and in 1969 a U.S. reconnaissance plane was shot down by North Korean fighter jets, killing 31 Americans. President Richard Nixon is said to have considered retaliating with a nuclear attack, but ultimately did not — a move for which he received significant praise.

“The danger of a wide war tends to trump whatever benefit you think might come from punishing your enemy here with a retaliatory strike,” Dan Sneider of the Asia-Pacific Research Center at Stanford University told NPR in 2010.

Then, in 1976, two American military officials were murdered in the Korean Demilitarized Zone in what became widely-known as the “axe murder incident.” The Army officers — Arthur Bonifas and Mark Barrett — were part of a group participating in a routine tree trimming when North Korean soldiers, claiming the tree was planted by Kim Il-sung, killed them with axes being used in the trimming.

Though Secretary of State Henry Kissinger reportedly supported bombing the North Koreans, President Gerald Ford worried over escalating tensions into a war and within days initiated Operation Paul Bunyan with South Korea: forces from the two countries returned to the tree and trimmed — a show of defiance against North Korea that did not boil over into a larger military conflict.

In 1985, North Korea signed onto the international nuclear Nonproliferation Treaty, preventing them from developing a nuclear arsenal. But in 1993, the International Atomic Energy Agency accused the country of failing to abide by the treaty and demanded to inspect its nuclear facilities, leading North Korea to threaten to leave the treaty while apparently continuing its nuclear program over the next several years.

In 2002, President George W. Bush named North Korea as part of what he described as the “Axis of Evil” — three governments he said “pose a grave and growing danger” the the rest of the world.

“North Korea is a regime arming with missiles and weapons of mass destruction while starving its citizens,” Bush said in his 2002 State of the Union address. “States like these (North Korea, Iran and Iraq) and their terrorist allies constitute an Axis of Evil, arming to threaten the peace of the world.”

Tensions have remained between the two countries ever since, with sporadic spikes — particularly during changes in South Korean leadership.

Former President Barack Obama responded to North Korea’s repeated nuclear testing — in defiance of the international community — with a policy of “strategic patience,” in which he pressured the isolated country with sanctions, strengthened U.S. missile defense and declined to negotiate unless Pyongyang ceased its nuclear program.

But in response to threats from the country and apparent huge gains in its capabilities, the Trump administration has said that strategic patience is over and that a “major, major conflict” with the country could be imminent.

That hasn’t stopped the regime from continuing its nuclear testing. This week, it threatened to retaliate against the U.S. in response to a new round of United Nations’ sanctions against the country — leading to this latest round of hostility.

While Politico notes that the Trump administration’s policy in North Korea hasn’t diverged much from that of Obama’s, some worry that the president’s tough talk may cause tensions in the region to escalate.

Kevin Gray, a senior lecturer in international relations at University of Sussex, said in an email interview on Wednesday that while North Korea’s threats are nothing new, Trump’s response to them is.

“I think it is a strategy that has been used by North Korea, which is essentially an economically weak country with a fairly antiquated military, to leverage its influence and get what it wants,” Gray said. “What is new is the use of what amounts to pretty much the same kind of rhetoric by a U.S. president. This potentially adds a much more destabilizing factor into the equation.”

According to Gray, Trump’s remarks were “ill-advised” and seemingly delivered in the off-the-cuff style in which he discusses other topics. While the administration has on numerous occasions clarified Trump’s remarks, Gray said, there are fears that his rhetoric could heighten hostilities with the isolated regime concerned with perceived threats against its survival.

“If North Korea’s actions are primarily driven by its sense of insecurity driven by a strong U.S. military presence in Northeast Asia,” Gray said, “the prospects of a cycle of threat and counter-threat by the US could be very dangerous.”