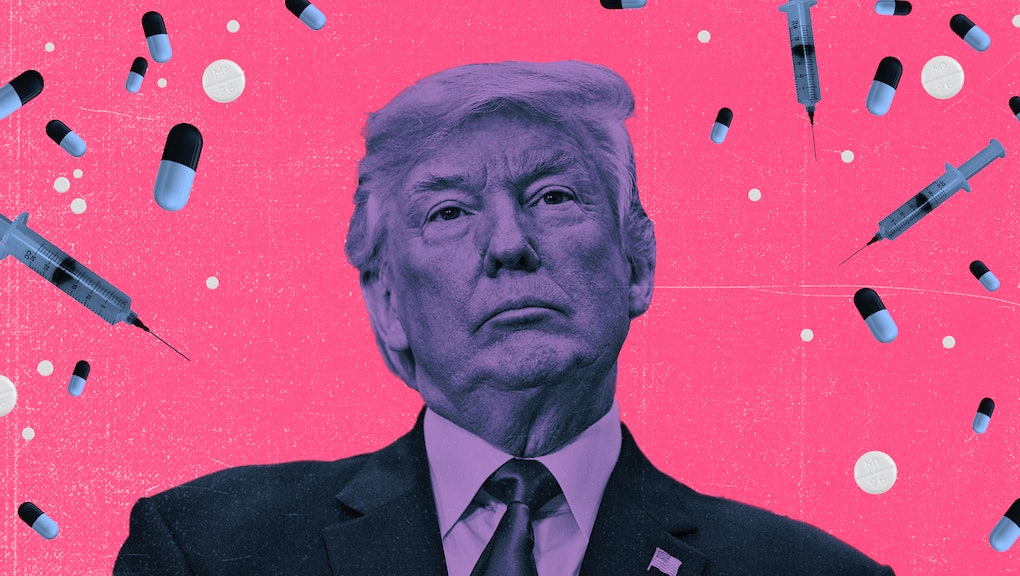 Speaking from his Bedminster, New Jersey, golf club on Tuesday afternoon, President Donald Trump vowed to get tough on the opioid epidemic that’s been ravaging the United States since the early 2010s — just not in the way anyone expected.

In a surprise move to anyone who had been expecting Trump to follow the recent recommendation of his opioid commission and declare a state of emergency over the ongoing crisis — which would have immediately cut through red tape and freed up valuable resources to dedicate towards mitigating the national disaster — Trump instead called for an increase in drug offender prosecutions nationally to curb the soaring rates of opioid addiction in America.

But despite the renewed vigor with which Trump and U.S. Attorney General Jeff Sessions, a notorious proponent of harsher sentences for drug crimes, want to hand out more jail time, the research is clear that more incarcerations won’t stop rising rates of addiction — and it’s already been delivered to Trump’s front door.

State and federal prisons currently hold nearly 300,000 people for drug-law violations, according to the letter — up from less than 25,000 in 1980. But when examining data linking imprisonment rates with rates of illicit drug use, drug overdose deaths and drug arrests, the analysis found no “statistically significant relationship” between the two.

“These findings reinforce a large body of prior research that casts doubt on the theory that stiffer prison terms effectively deter drug use, distribution and other drug-law violations,” the letter reads. “The evidence strongly suggests that policymakers pursue alternative strategies that research shows will work better and cost taxpayers less.”

But in spite of the research, the Trump administration has repeatedly sought to combat the opioid epidemic with more law enforcement, rather than with a treatment-based approach.

According to Dr. Constance Scharff, director of addiction research at Cliffside Malibu in Los Angeles County, policing addiction does nothing to solve the underlying variables that cause it in the first place.

“The problem with opioid addiction is that by and large it was created in this country by inappropriate prescribing practices,” she told Mic via email. “That means that going after international drug cartels and building a wall does nothing to address the source of the problem.”

“And going after users on an individual basis won’t help either,” she said.

“There are few drug treatment programs in prisons and jails,” Scharff added. “Treatment is the only way to deal with an addiction problem, but that means addressing health care policy, which this administration does not seem to be able to get a handle on.”

When William Bradley was 19, he walked into the back room at a high school graduation party and found his childhood friend, James, shooting up heroin alongside several other teenagers.

Bradley, a Queens, New York, resident who is now 28, had watched James slowly spiral out of control for years; James had lost his father and two brothers by the time he was a senior in high school, and had turned to prescription opioids like Percocet initially to numb that pain.

“I’m a kid still, 19 years old... I didn’t really know how to position myself to be like okay, you need to get some help or whatever, so I just tried to help him the best I could,” Bradley said in an interview with Mic.

For Bradley, providing that help meant sitting James’ mother down to let her know what he’d seen. The conversation worked, and two months later, James headed to a rehab facility in Colorado.

When asked if he thought James should have gone to jail to deal with his addiction, Bradley’s response was a confident “hell no.”

“I know it’s not legal and I understand that, but he was suffering already,” Bradley said. “If jail was built around rehabilitating people, then maybe that would be something where I would say, ‘Okay, yeah, that’s an option.’ But it seems like jail is mostly a punishment, and for someone who’s already suffering, why would you give them two punishments now?”

“I wanted to help him, not hurt him,” he added.

According to Scharff, addiction must be treated as a mental illness, and throwing drug users in prison will do nothing to tackle the underlying factors that cause addiction in the first place.

“All addictions affect the brain in similar ways,” she said. “No law enforcement approach is going to be better than treatment for a medical concern. We don’t lock people up for having diabetes or cancer and expect them to get well. Why would that approach work for addiction or other mental illnesses?”

The long history of race and drug policing

Beyond failing to address the underlying issues that cause addiction, incarcerating drug users historically has a disproportionate affect on people of color.

In 2015, former President Barack Obama criticized what he referred to as the “criminal injustice” system during his remarks at that year’s NAACP national convention.

“Over the last few decades, we’ve also locked up more and more nonviolent drug offenders than ever before, for longer than ever before, and that is the real reason our prison population is so high,” Obama said at the time.

The increase in federal prosecutions, he said, had resulted in “black boys and black men, Latino boys and Latino men,” being disproportionately targeted by police and “treated differently under the law.”

According to June 2017 data from the Bureau of Prisons, there are currently 81,336 people incarcerated at the federal level for drug crimes — a whopping 46% of the total number of inmates. But according to the most recent available numbers from the United States Sentencing Commission, white people made up only 24.3% of the federal prison population sentenced for drug crimes in fiscal year 2015, with black, Hispanic and other races comprising the remaining 75.7%.

The opioid epidemic in particular is also different from drug scourges of the past, which disproportionately impacted the urban poor, in that it has overwhelmingly afflicted white, suburban areas. The notable shift in racial dynamics has triggered speculation over whether new, “gentler” drug policies — like police departments in hard-hit cities like Gloucester, Massachusetts, offering penalty-free safe zones for addicts to surrender themselves to police to be funneled into treatment instead of getting locked up.

But for Bradley, who has friends and family who grew up in Baltimore during the crack-cocaine epidemic of the late 1980s, the devastating impact drug policing has had on communities of color — and the future of the drug war — is personal.

“They’re leaving behind families who can’t afford to keep their homes or make it on their own,” he said. “I think that we’ve seen what the war on drugs and criminalizing people and treating addiction as a crime instead of a mental illness... we’ve seen what that does already.”