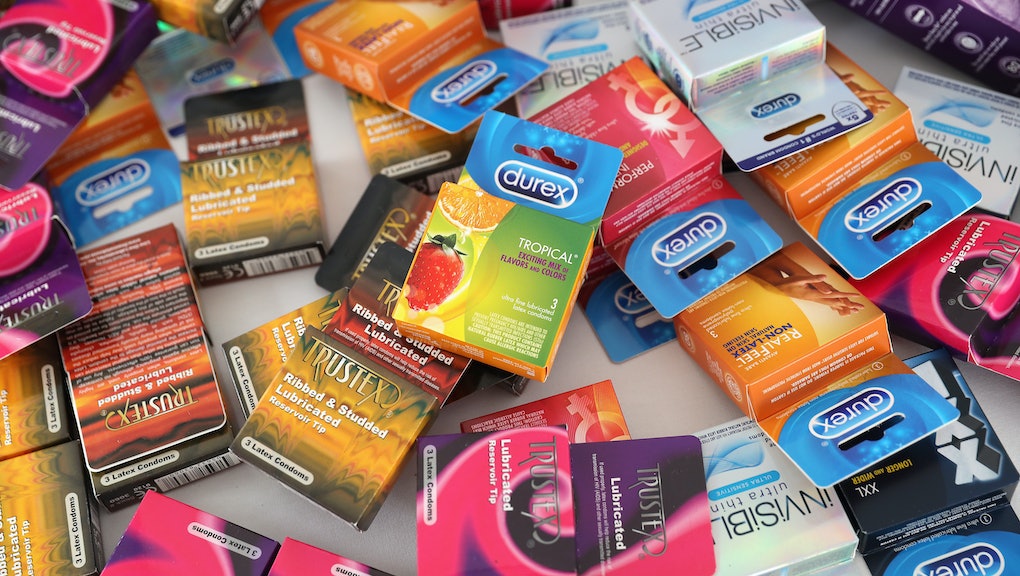 Condoms are still in the “family planning” aisle at the drugstore. Experts say that’s a problem.

In mid-June, Jamie Lawson swung by his local Sainsbury’s (a U.K. supermarket franchise) to pick up a few things — eggs, milk, fruit, condoms — and found himself fuming in front of the store’s “family planning” section. Although far from the first time he had seen the label in his life, this particular instance was the last straw.

“I am a gay man; the sex I have is non-reproductive by definition,” Lawson, an anthropologist focused on sex and sexuality at the University of Bristol, explained in a Skype interview Wednesday. He explained that buying condoms and lube in that section makes him feel excluded from the sexual experience, “self-conscious in a way that heterosexual people [aren’t].”

Condoms can, of course, be used for family planning — the intentional taking of steps to control the number of children you will have and when you will have them. Condoms are also a handy barrier to sexually transmitted infections; lube serves little contraceptive purpose, other than making sex more pleasurable. Classifying both items — along with the vibrators and small toys that increasingly occupy those same shelves — as “family planning” tools seems both categorically incorrect and an attempt to euphemize what they are actually used for: sex.

Lawson also investigated the signage at some of Sainsbury’s competitors. Boots, a chain drugstore that currently faces widespread criticism for overpricing the morning-after pill, organized its condoms and lubes under a “sexual well-being” sign nestled below a larger “family planning” flag. Tesco, a chain grocer, went with “family planning,” full stop. Two more ubiquitous retailers in the UK, Superdrug and Morrison’s, categorized these items under “sexual health”and “health,” respectively.

None of the “family planning” offenders returned request for comment, but in a series of exchanges with initially helpful, eventually apathetic customer service reps, Lawson got the same line again and again: “Family planning” is the language we’ve always used, and saying the word “sexual” would either offend or embarrass the majority of our clientele.

A label on a drugstore aisle seems, on its face, like a really small thing. Its implication, though, is broad and potentially quite damaging. As Lawson explained in a post on the blog Girl on the Net, “having fun,” “earning a living” and “a strong desire to have an orgasm” are just a few of the many non-baby-making-related, yet entirely legitimate, reasons people might throw condoms in their carts.

As it turns out, U.S. drugstores are not better than their U.K. equivalents. Indeed, they might be worse. I visited three separate pharmacies: A Duane Reade and a CVS in Bushwick, Brooklyn, and a Rite Aid in the Financial District of Manhattan.

In the CVS, the “family planning” section included regular condoms, flavored condoms, lubes of all kinds, vibrators, cock rings and spermicidal gels and foams. Notably absent were the pregnancy tests and ovulation indicators, situated across the store with the yeast infection medication and vaginal pH balancers in “feminine care.”

In the Duane Reade, “family planning” and “sexual wellness” sat side by side on the same marquee. These shelves were stocked with condoms, lubes, buzzy toys and a wide range of performance-enhancing tablets. Notably, the “RockHard Weekend” erection boosters and the “Gun Oil Loaded” lube lived on the “family planning” side of the display, while more feminine lubes sat on an unlabeled shelf nearby (with the Monistat and the pregnancy tests). That particular Duane Reade declined to comment on their shelf-stocking strategy.

Rite Aid placed “family planning” and “feminine needs” far away from its expansive “wellness” section, stationing the two categories (along with “baby care” and “diapers”) between “food” and “home care.” Here, pregnancy tests sat below a more modest collection of lubes and condoms.

Like their U.K. counterparts, none of these companies returned requests for comment. But Elyse Altabet, Reckitt Benckiser’s senior brand manager for sexual health — covering Durex condoms and K-Y lube — was able to shed some light on the ways in which pharmacies categorize their products.

Companies like Reckitt Benckiser work with retailers to discern what kinds of displays their customers respond to best. While decisions about how to label and stock shelves are ultimately up to the individual drugstores, Altabet explained, Reckitt Benckiser can offer insight into consumer attitudes. Most people understand “family planning” and “sexual wellness” to be branches on the same sexual health tree, but they want to avoid feeling uncomfortable when they shop. They want navigable signage that immediately communicates where the condoms live so they can “get in and get out” quickly, Altabet said.

Retailers keep these things in mind when setting up shop, which is why you’ll typically find the sex stuff at the back of the store — it elevates the feeling of privacy, according to Altabet. As far as language is concerned, she added, drugstores are often trying to avoid complaints from parents who come in with kids and don’t want those kids encountering the word sex.

Yet a kid who points to a condom and asks dad, “What’s that?” arguably presents the ideal teachable moment; the golden opportunity to have an age-appropriate talk about the importance of safety in sex.

Altabet does think talking about sex might help cut some of those awkward feelings, elevating both consumer health and pleasure along the way. Reckitt Benckiser sees its Durex and K-Y products as sex-positive tools intended to help wear down taboos, she said. But that work takes time. “I think oftentimes what you see in stores is about where society is, and not where it should be moved to,” she said.

Jim Downs — author of Stand by Me: The Forgotten History of Gay Liberation and an associate professor of history at Connecticut College — sees the “family planning” label as an indication that society is maybe moving backwards. Because wherever it’s substituted for “sexual pleasure,” “family planning” represents “a real kick in the teeth” to a few notable social justice movements, he explained, and functions as a sort of “Trojan horse” for people of conservative beliefs to smuggle their socio-political views into common culture.

Downs explained that one large reason that condoms are so widely available now — on college campuses, in bars, in condom-specific stores, sometimes even as handouts on the street — is that the AIDS epidemic of the 1980s and 90s awoke activists to the need to talk about sex. With masses of men unable or unwilling to speak openly about their sex lives, exacerbated by an abundance of misinformation about the ways STIs can be transmitted, HIV spread rapidly. Between the epidemic’s start in 1981 and its peak in 1995, almost 320,000 people in the U.S. died of AIDS or AIDS-related causes.

According to Downs, the response to those deaths was an extended, concerted effort to normalize condoms, embedding them as a synonym for safety in the sexual lexicon. Substituting “family planning” for “sex” is “erasing decades of what HIV activists put forward to make condom usage popular, comfortable, acceptable.

According to the American Sexual Health Association, more than half of the U.S. population will contract an STI at some point. Gonorrhea, syphilis and chlamydia diagnosis rates are all climbing, especially within the 15-to-24-year-old pool. Meanwhile, medically untreatable strains of all three diseases are also on the rise. And, while new HIV diagnoses are steadily becoming rarer overall, that’s not the case for African American and Latino communities, where barriers to health care and stigmas persist. Now seems like the moment to expand awareness of sexual health resources, not hide them under a different name.

According to Lawson, change starts with tiny incremental adjustments. Going with something as simple as “sexual well-being” begins to solve the problem because that “captures everything” — pleasure very much included. And maybe saying “sex” out loud helps us all chip away at an embarrassment that needn’t exist.