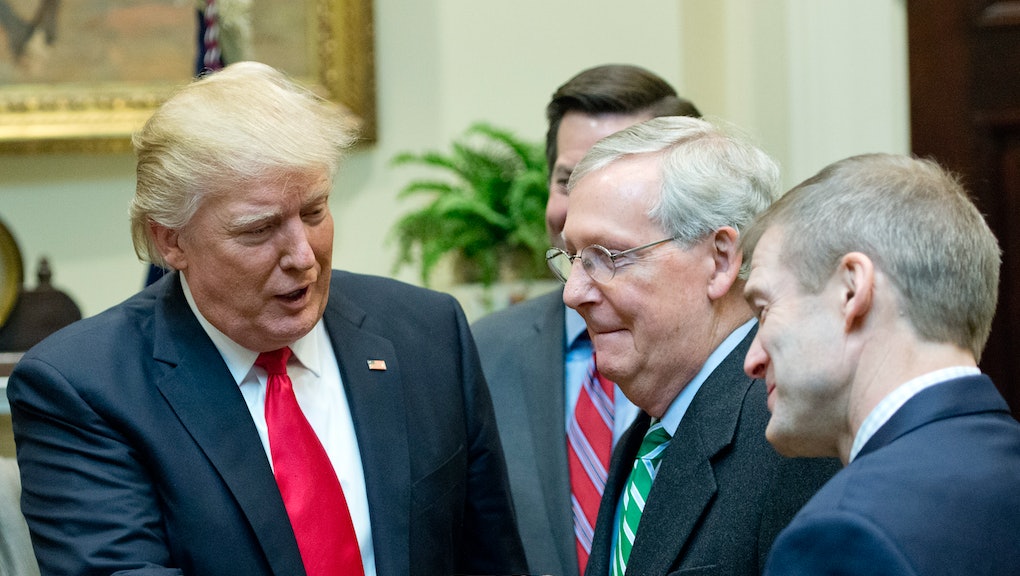 Despite escalating tensions over North Korea’s nuclear advancements, President Donald Trump clearly had something else on his mind on Thursday morning: His ongoing feud with Senate Majority Leader Mitch McConnell (R-Ky.), one of the highest-ranking members of the president’s own party.

In an early morning tweet on Thursday, Trump again blamed McConnell for the Republican party’s failure to repeal and replace the Affordable Care Act, ratcheting up a back-and-forth between the two that began earlier this week.

Trump and McConnell began sparring over health care on Monday, when McConnell told a crowd gathered at a Rotary Club meeting in Kentucky that the president’s lack of experience in politics had led to “excessive expectations about how quickly things happen in the democratic process,” and that Trump was setting “artificial deadlines” for legislative accomplishments, ABC News reported on Tuesday.

On Wednesday, Trump responded to McConnell’s comments on Twitter, appearing to blame McConnell for the Republican party’s failure to pass health care legislation.

Just hours later on Thursday, Trump again targeted McConnell in a tweet, this time admonishing him directly to “get back to work and put Repeal & Replace, Tax Reform & Cuts and a great Infrastructure Bill on my desk for signing.”

That makes Thursday’s tweets the latest in two consecutive days that have singled out McConnell — a move that serves to fire up his base but could jeopardize any potential cooperation between the two once the August recess ends next month.

Trump’s repeated attacks on McConnell over health care also come during a major week for international relations. Tensions over North Korea’s advancements to its nuclear program have been escalating, fueled in part by Trump’s off-the-cuff remarks that North Korea “will be met with fire and fury like the world has never seen.”

On Wednesday, North Korea responded by saying that “only absolute force” can work on someone like Trump — yet Trump’s first tweets of the day on Thursday were an attack on his own party and a retweet of a conservative poll suggesting he’s a better leader than former President Barack Obama.

It’s unclear why, in a moment of international crisis, the commander in chief might focus on his own party’s failings, but it may have something to do with his alleged obsession with undoing Obama’s legacy, much of which is defined by the ACA, his landmark health care legislation.

As one European diplomat put it, speaking anonymously to BuzzFeed News on Wednesday, “It’s his only real position ... He will ask: ‘Did Obama approve this?’ And if the answer is affirmative, he will say: ‘We don’t.’ He won’t even want to listen to the arguments or have a debate. He is obsessed with Obama.”