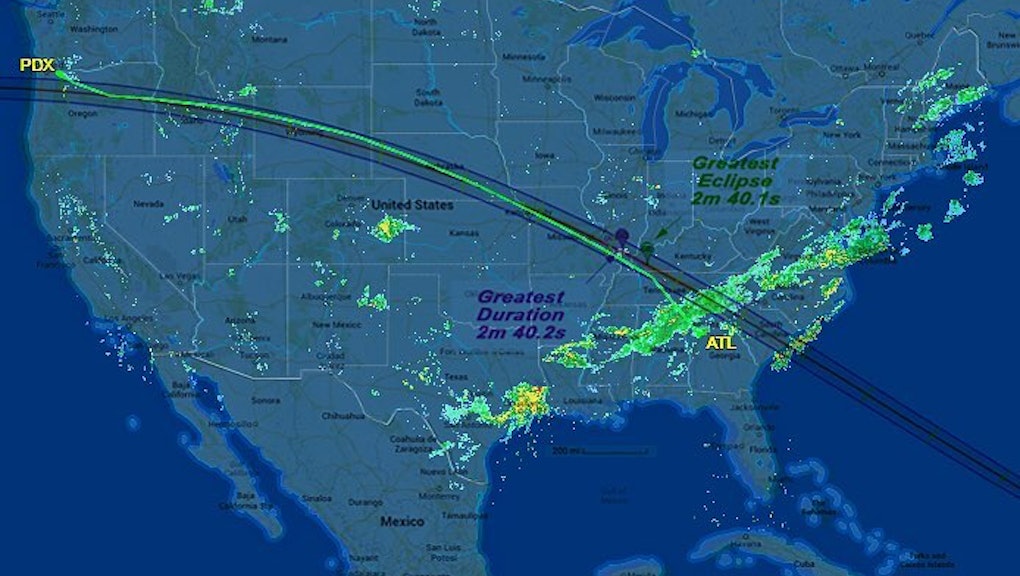 The upcoming solar eclipse has sent Americans into a frenzy trying to find last-minute solutions to view the once-in-a-lifetime astronomical event. With only a 70-mile span in which viewers will be able to see the eclipse in its entirety, claiming a stake of that space on the ground is nothing short of competitive.

Delta has a standard flight path from Portland, Oregon, to Atlanta which not only follows the majority of the eclipse’s path, but will also be airborne during the event. This option was recently discovered by Todd Evans, who overlaid the path of the flight with the path of the eclipse using FlightAware and NASA’s eclipse data and shared his findings on Reddit. We have reached out to Evans for comment.

Passengers on Delta flight 2466 will get an above-the-clouds, low-atmosphere vantage point with no more hassle than what airport security provides. This is a surefire way to avoid eclipse traffic; in fact, it’s probably the most relaxed way to experience the eclipse firsthand in its totality.

By running the numbers, we were able to make an estimate of when passengers should look out for the eclipse. The average cruising speed of a Boeing 757 is 528 mph, while the eclipse will be moving at 2,410 mph when it gets to Oregon, according to Eclipse2017.org. Although the eclipse will slow in speed after it begins, it will essentially “chase” the plane across the country until the two intersect.

Assuming the plane both takes off at the scheduled 8:45 am Pacific and follows its planned flight path, passengers on flight DL 2466 can expect to see the eclipse about midway through the flight. Viewers in the sky will get roughly an extra minute inside the eclipse’s umbra, the darkest part of its shadow. It should look something like this.

As of publication time, this one-way flight costs $401.20, with 48 seats still available.

Of those 48 seats, seven are window seats. The three still available on the right side of the plane (including one in first class) will have the best view of the eclipse. Other passengers may be willing to share their vantage points during the four minutes where the moon blocks out the sun, or perhaps Delta can be compelled to install some sort of camera feed that will relay the pilot’s view to the cabin. We have reached out to Delta for comment.

Whether you witness the solar eclipse from the ground or the sky, remember to don proper eye protection to avoid damaging effects from the sun. Or just plan ahead for 2045, when a solar eclipse will once again take a trek across the United States.