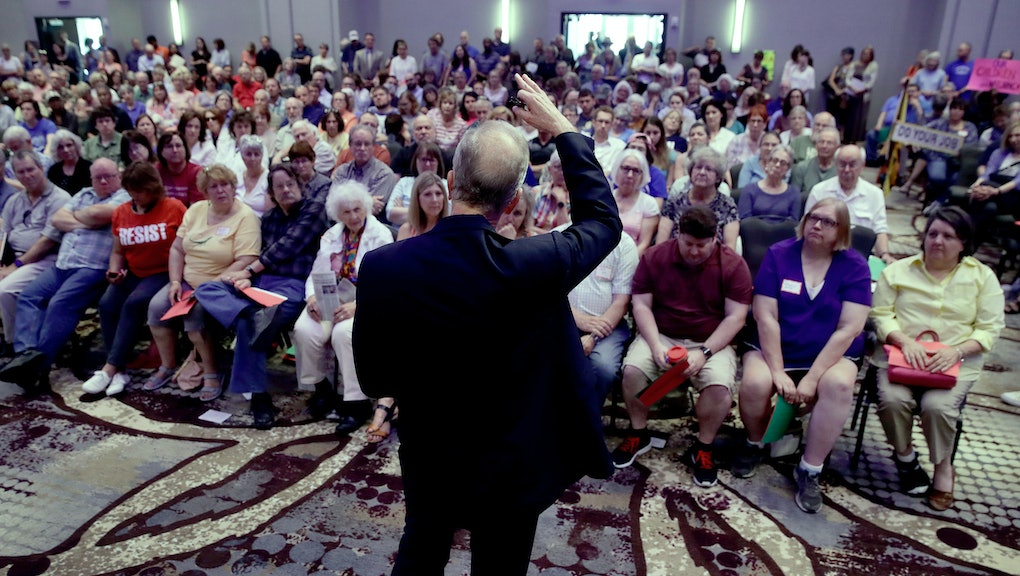 Only 13% of Republicans will hold August town halls, and grassroots groups aren’t standing for it

It’s no longer a surprise that members of Congress have little interest in meeting with their constituents. Fewer than half of Republicans in Congress have held a town hall in 2017, compared to more than 90% of Democrats.

Those numbers are according to Town Hall Project, a progressive grassroots group tracking voter forums nationwide. Now, the group has found fewer members of Congress are holding town halls compared to the beginning of the year.

In April, during the heat of the House health care debate, 21% of Republicans in Congress held town halls, a number that dipped to 7% for House Republicans in May.

August marks the longest period of each year that members of Congress spend away from Washington, D.C. It has historically been a time to meet with voters. But ever since Barack Obama’s first election, the period has been challenging for the party in power.

In 2009, Democrats encountered a new wave of grassroots energy from angry conservatives. The next year, Republicans criticized Democratic House members for holding few town halls in August — a few months before the midterm elections in which the GOP won back control of the House.

The August recess has historically been a time for lawmakers to meet with voters. But ever since Barack Obama’s first election, the period has been challenging for the party in power.

But grassroots energy in 2017 rivals — if not exceeds — what was seen in 2009, albeit from an opposite ideology. Groups like Indivisible, MoveOn and other progressive organizations old and new are planning hundreds of actions nationwide to pressure Republicans in Congress.

Just like health care, pressure on Capitol Hill and in the media will be critical. But protests, sit-ins and town halls will be a continued part of the strategy, Helmstetter said.

“Direct constituent pressure was instrumental in stopping the disastrous GOP health care plan in Congress,” said Helen Kalla, a spokesperson for Indivisible, in an email.

The Not One Penny campaign launched earlier this month with a focus on activism and direct action, building on the success of the April 15 Tax March that drew thousands of Americans nationwide, demanding Trump release his tax returns.

MoveOn, an online progressive network, is part of that campaign. The group has trained more than 1,000 organizers throughout the country during this summer. That work will culminate in more than 200 actions at Republican town halls, appearances by members of Congress or self-organized protest events.

“The most important tactic constituents have to hold their representatives to account is peaceful confrontation about the issues of the day,” said Ben Wikler, Washington director for MoveOn.

Grassroots groups are preparing tools for members to directly engage with Republicans. Indivisible’s August toolkit outlines how to take direct action to oppose the GOP on tax reform, and the group launched a webpage to track how organizers are opposing Trump and Republicans during the August recess.

Town Hall Project is also getting in on the organizing action. The group hired an organizer at the end of July to help people attend existing town halls. The organizer is also focused on having members of Congress or grassroots groups “adopt a district” to hold town halls in the district of a member of Congress who is avoiding town halls.

“It’s a rare moment when you have people deeply motivated and proof of direct action,” said Nathan Williams, managing director of Town Hall Project. “That’s why this August is so special.”