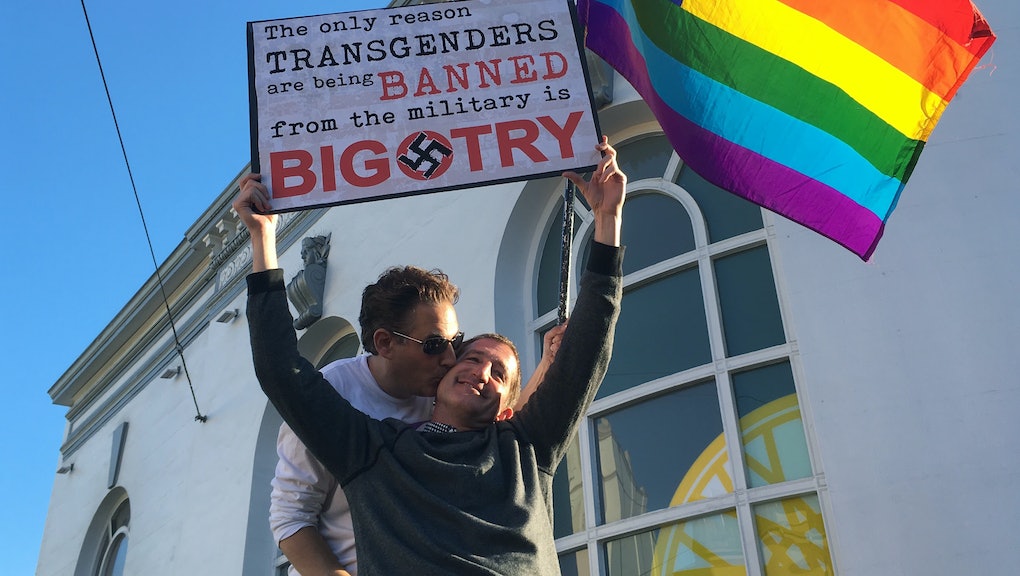 President Donald Trump gave himself a hearty pat on the back Thursday for trying to drum transgender people out of the U.S. armed forces, saying he’s “doing the military a great favor” by clearing up a “complicated” issue.

Trump, who’s in the midst of a 17-day “working vacation” at his New Jersey golf resort, said he has “great respect” for the transgender community and even went so far as to claim he “got a lot of votes” from its members.

But the president, who announced his plan to bar trans men and women from the service in a late-July tweet, said he deserves accolades for tackling the “confusing” matter head-on.

“It’s been a very difficult situation and I think I’m doing a lot of people a favor by coming out and just saying it,” Trump said, per a pool report emailed to the press corps.

Critics of his edict responded by saying not only that research shows having transgender people in the military does not harm unit cohesion, but that the costs of their health care is quite negligible compared to defense spending on projects such as the F-35 fighter jet program.

Trump’s ban plan, which he rolled out apparently without much, if any, detailed consultation with the Pentagon, didn’t get much backup even from members of his own Republican party.

Five transgender members of the service have filed suit to stall the ban, which has not yet gone into effect for either prospective or current members of the military.

Besides complimenting himself on the transgender ban, Trump — who on Thursday also ratcheted up his already tough talk on North Korea’s nuclear missile program — expressed gratitude to Russia’s Vladimir Putin for expelling U.S. diplomats.

“I want to thank him because we’re trying to cut down our payroll and as far as I’m concerned I’m very thankful that he let go of a large number of people because now we have a smaller payroll,” the president said, according to Politico.

“There’s no real reason for them to go back. I greatly appreciate the fact that we’ve been able to cut our payroll of the United States,” Trump added. “We’re going to save a lot of money.”

The Kremlin had announced it would eject the American diplomats as payback for sanctions the U.S. imposed for suspected Russian attempts to meddle with the outcome of the 2016 presidential election.