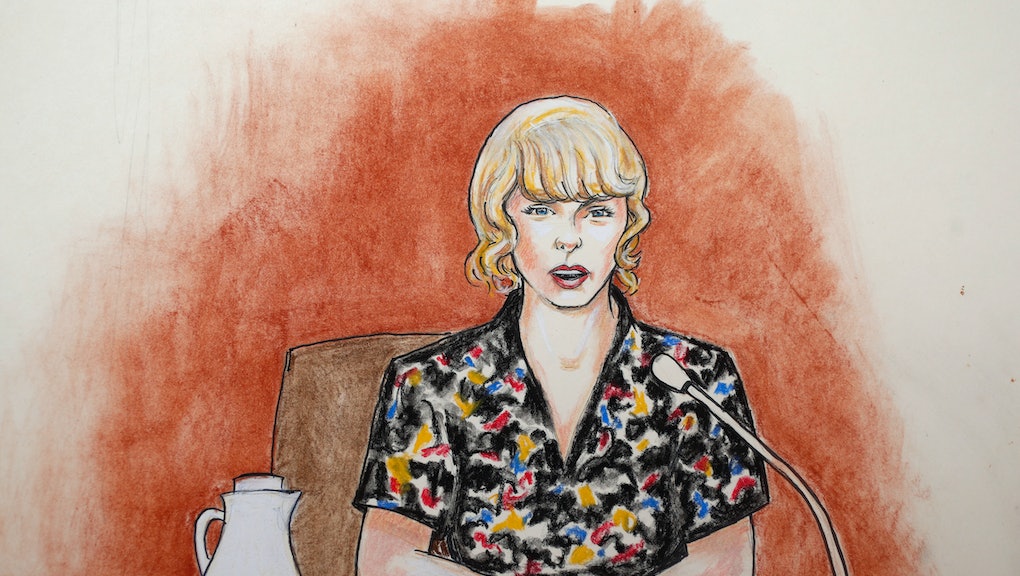 Testifying at trial that radio DJ David Mueller allegedly groped her in 2013 — reaching up under her skirt and grabbing “a handful of [her] ass” while she posed for a photo with him — Taylor Swift delivered what many outlets have called “brave” and “badass”.

“I’m not going to let you or your client make me feel like this was my fault, because it isn’t,” she said, according to the New York Times, adding, “I’m being blamed for the unfortunate events of his life that are a product of his decisions. Not mine.” When Mueller’s attorney, Gabriel McFarland, pointed to a photo of the alleged butt grab and noted that the front hem of Swift’s skirt wasn’t raised to accommodate a hand, Swift is said to have archly explained, “Because my ass is located on the back of my body.”

It makes sense that Swift is now being hailed as a hero for her testimony on Thursday: Her answers were powerful. A less talked about — yet just as laudable — aspect of her testimony, though, came when Swift said she wasn’t surprised to hear Mueller call her cold after the fact.

“I have ... an uncanny ability to elicit new types of criticism,” Swift remarked, according to BuzzFeed reporter Claudia Rosenbaum, in attendance at the trial.

Swift is forever being picked apart in the public eye — her comments remind us why women, even the powerful ones (see: Kesha, Amber Heard and Gabrielle Union), are often reticent to come forward after being allegedly sexually assaulted or abused. More than three years after Muellar allegedly snuck his hand onto her butt cheek and latched it there for an extended period of time — an indignity she told McFarland she politely endured so as not to upset her fans — Swift feared she would once again be made the villain.

Having to rehash a painful incident for an audience that may be skeptical (or even react with hostility) explains why so many sexual assault survivors stay silent. It is traumatizing to be violated in the first place. Being bombarded with blame for someone else’s crime only cuts deeper.

It’s eminently worth remembering that Swift — a figure often reviled for appearing to court public attention through the surreptitious engineering of high-profile drama, conflict and relationships, and a woman whose demise internet misogynists demand on the grounds that she strikes them as a “bitch” — did not ask for this. She did not ask for the stranger’s (alleged) hand on her bare ass, nor did she ask to go to court: Mueller sued Swift first, seeking $3 million in damages on the grounds that he’d been fired because of her false accusations. Swift is now countersuing Mueller for just $1.

It’s also worth remembering that, at the time of the alleged incident, Swift was 23 and Mueller was 51. And then, if what she said happened the way she maintains that it did, Swift felt an obligation to hold her smile out of deference to her (typically young female) fans, and potentially also because she lives in a world that teaches women to be unflinchingly nice.

In short, it’s worth keeping in mind that no matter how famous Swift was or has since become, many social power dynamics — sex, age, gender norms — skew in Mueller’s favor. According to her testimony, Swift seemed to expect that she’d end up shouldering criticism for Mueller’s bad behavior.

According to the Rape, Abuse & Incest National Network, about 1 in 3 sexual assaults are reported to the police. The most commonly cited reasons for staying quiet include fear of retaliation, belief that authorities won’t do anything to help and the desire to keep a personal matter personal. According to Lindsey Pratt, a New York City psychotherapist who specializes in treating sexual trauma, survivors often fear victim blaming.

In a previous interview with Mic, Pratt explained that calling a sexual assault survivor a liar, or telling them they somehow earned what happened to them, is “salt in the deepest wound a person could experience.” For many people who’ve experienced sexual trauma, the expectation that they will be disbelieved, vilified or both is ample reason to keep the incident to themselves. For those survivors, “the thought of pressing charges is synonymous with, ‘My life will become more derailed than it already is,’” Pratt said.

Swift, formerly a fixture in tabloid and mainstream media, has spent the past year conspicuously absent from a carefully crafted public life. Some have speculated, perhaps she’s learned her lesson when it comes to parading a new relationship in front of the paparazzi before it’s ready. But it may also be that Swift didn’t want to face another round of criticism.