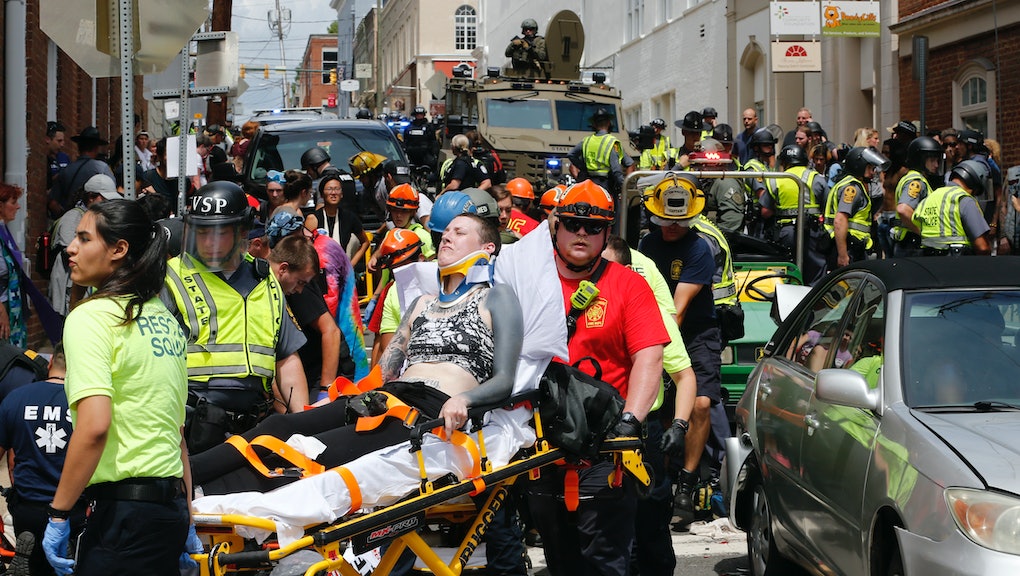 One dead after a day of violence at white nationalist rally in Charlottesville, mayor says

One person was killed and 19 more were injured during a day of violent clashes Saturday at the white nationalist “Unite the Right” rally in Charlottesville, Virginia, officials said.

The death occurred when a car plowed into a group of protesters, resulting in “multiple injuries,” Charlottesville Mayor Mike Signer and the Charlottesville Police Department confirmed.

The victim, identified as a 32-year-old woman, was crossing the street when she was struck, Charlottesville Police Chief Al Thomas said in a press conference Saturday. Her name is being withheld as officials work to notify her family.

“The premeditated violence that our community experienced today was completely unacceptable,” Thomas said.

The car suspected to be involved in the crash was found shortly after, and a driver, identified as James Alex Fields Jr., is in custody, authorities confirmed.

The FBI announced on Saturday that it is opening a civil rights investigation into the incident.

Shocking video of the vehicle incident circulating on Twitter on Saturday afternoon showed a car speeding into a group of protesters on the street and into another car in front of it.

Journalist Alex Rubinstein captured the aftermath of the incident, tweeting that there were “extremely heavy injuries.”

Charlottesville police did not provide Mic with an official number of injuries in the incident. A witness told the Washington Post that the incident was “absolutely intentional.”

The incident occurred near the intersection of Water and 4th Streets, according to Charlottesville police. There, a witness told the Post, a car rammed the car in front of it at high speed, backed up and ran over pedestrians. Three cars were involved, according to police. It was unclear Saturday afternoon if the driver had been apprehended.

Officials declared a state of emergency in Charlottesville as white nationalists protested the planned removal of a Confederate statue in the college town.