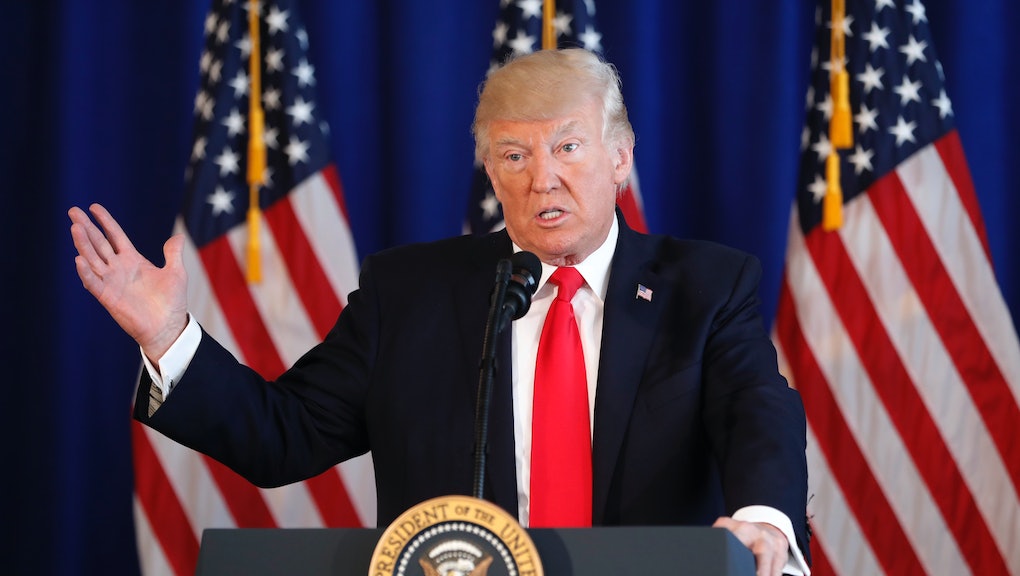 Trump condemns hatred displayed “on many sides” at violent rally in Charlottesville, Virginia

President Donald Trump called for unity Saturday, following a day of violent clashes between white nationalists and counter-protesters in Charlottesville, Virginia, in a statement condemning the hatred “on many sides.”

“We condemn in the strongest possible terms this egregious display of hatred, bigotry and violence on many sides, on many sides,” Trump in a press conference at his Bedminster, New Jersey, golf club. “This hate and division must stop, and it must stop now.”

The comments come after a car plowed through protesters in the city, leaving one dead and several others injured. White nationalists — including former Ku Klux Klan leader David Duke and alt-right leader Richard Spencer — have been rallying in the city in protest of plans to remove a statue of Confederate General Robert E. Lee and have had violent confrontations with counter-protesters throughout the day.

The college town — home to University of Virginia — is under a state of emergency.

Trump was criticized Saturday for not commenting on the violence until the early afternoon, when the rally had been broken up at Emancipation Park by law enforcement.

His Twitter response — in which he said that he condemns “all that hate stands for” — was slammed by critics, including Senate Minority Leader Chuck Schumer, who felt it did not go far enough.

“Of course we condemn ALL that hate stands for,” Schumer tweeted. “Until [Trump] specifically condemns alt-right action in Charlottesville, he hasn’t done his job.”

Trump did not specifically condemn the alt-right in his press conference Saturday afternoon. Instead, he discussed the country’s “absolute record employment” numbers, the companies he says are returning to the U.S. and the trade deals he’s been negotiating, saying that he is troubled by the violence in Virginia because the “country is doing so well in many ways.”

“We have so many incredible things happening in our country, Trump said. “So when I watch Charlottesville, to me its very, very sad.”

He also seemed to deflect criticism for any role his rhetoric or officials in his administration may have played in energizing the white nationalists in Charlottesville. Earlier in the day, Duke said those at the rally were attempting to “fulfill the promises of Donald Trump.”

Trump said that he has been in contact with Virginia Gov. Terry McAuliffe and thanked law enforcement, National Guard forces and federal authorities for doing a “terrific job.” He also said his administration would “study” Charlottesville to “see what we’re doing wrong as a country where things like this can happen.”

“We are all Americans first,” Trump said. “We love our country. We love our god. We love our flag ... so we want to get the situation straightened out in Charlottesville.”

His statement Saturday was slammed by a number of critics who felt that Trump did not go far enough in condemning the violence — and for his “many sides” comment drawing an equivalency between the white nationalists and their opponents.

The press conference was scheduled to be on veterans affairs, and before speaking, Trump shook hands with several veterans present. Then, he called on Americans to “love” and “respect” one another and to “cherish” our history, saying that there should be “a swift restoration of law” in Charlottesville.

“No citizen should ever fear for their safety and security in our society,” Trump said. “No child should ever be afraid to go outside and play or be with their parents and have a good time.”