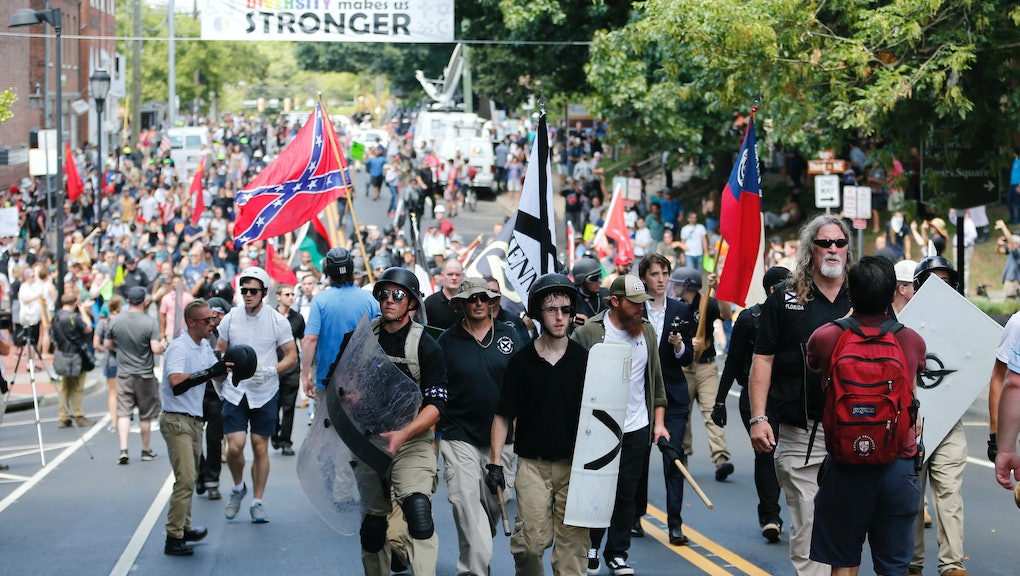 Did the neo-Nazi blog ‘Daily Stormer’ fake a hack after Charlottesville? Here’s what’s going on.

In the wake of a gathering of neo-Nazis and white supremacists that left one peaceful protester dead from a violent car attack in Charlottesville, Virginia, Saturday, some corners of the internet were cheering on the extremist marchers.

The neo-Nazi website the Daily Stormer — known for its founder Andrew Anglin’s screeds against Jews, women, black Americans and LGBT people — put up a post mocking and insulting Heather Heyer, the 32-year-old woman who was fatally struck by a car while protesting against Saturday’s extremist gathering.

That post, however, may have gotten the Daily Stormer kicked off the internet‚ at least temporarily, and led to a bizarre, possibly fake, “hack” of the neo-Nazi website.

After activist Amy Siskind tweeted a screenshot of the post in question at GoDaddy, the company that hosts the Daily Stormer, it tweeted back late Sunday night that it had “informed the Daily Stormer that they have 24 hours to move the domain to another provider, as they have violated our terms of service.”

A spokesperson for GoDaddy confirmed the news in an email to Mic on Monday, and added that, “given their latest article comes on the immediate heels of a violent act, we believe this type of article could incite additional violence, which violates our terms of service.”

That means that Anglin, already facing a lawsuit for calling on his followers to harass a Jewish Montana resident and her family, has less than a day to move his domain to a different provider.

When the Daily Stormer was accessed early Monday morning, the front page of the neo-Nazi site appeared to have been “hacked,” allegedly by Anonymous, the loose coalition of international online activists and hackers.

However, the site’s older content was still visible, and the message from the alleged hackers warned that the site would be taken down in 24 hours — the same window of time given by GoDaddy.

The message claimed that Anonymous had taken the site over “in defense of the Jewish people,” and that “it took a united force of elite hackers from around the world to breach the systems and firewall.”

However, a Twitter account that is affiliated with Anonymous, said that so far, it had no confirmation that this was, indeed, a hack and suggested that the entire “hack” had been made up by the Daily Stormer in order to further a narrative of victimhood.

As the Independent reported Monday, if the Daily Stormer can’t secure a new host for its domain, it may soon disappear all together.