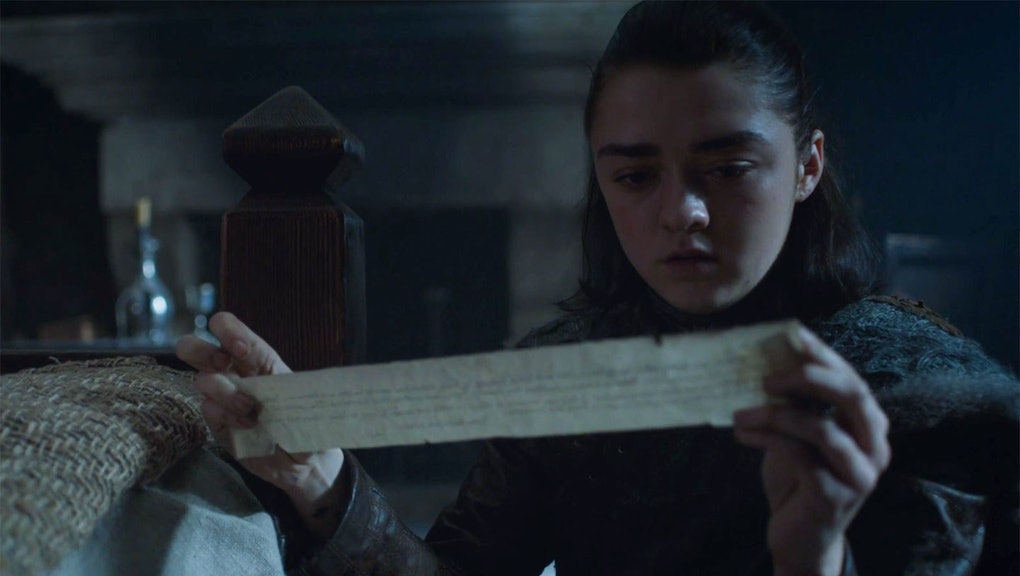 ‘Game of Thrones’ Theories: Littlefinger is trying to turn Arya against Sansa. Can it work?

What a difference a week can make. As of last week’s episode of Game of Thrones, it looked as though Littlefinger’s scheming was finally coming up short: Bran Stark threw Littlefinger’s most infamous phrase (”Chaos is a ladder”) back in his face and Arya Stark was giving him death glares after casually holding her own in a spar against Brienne of Tarth. Even a guy with a penchant for manipulation and navigating the realm’s high-stakes political field would presumably have trouble against an all-knowing tree wizard and a skilled assassin, not to mention that Sansa Stark was dismissing all of his feeble attempts at wooing her.

But perhaps I was getting ahead of myself in saying that Littlefinger was screwed. This dude’s basically a cockroach: He’s impossible to stamp out. If the White Walkers invade Westeros, I wouldn’t put it past him to somehow find a way to curry favor with the Night King, despite his being a mute ice zombie and the walking embodiment of evil.

Turns out, all Littlefinger needed to do to set his scheming back on track was cause a rift between Arya and Sansa — and he’s started that process by digging up a scroll from the first season.

In Sunday’s episode, the season’s fifth, we see Arya stalk Littlefinger across Winterfell, eventually making her way to his chambers. Winterfell’s current maester, Wolkan, gives Littlefinger an old scroll that Maester Luwin kept archived. (Earlier in the season, it’s emphasized that Luwin kept every scroll received in Winterfell for his records.) When Arya sneaks into Littlefinger’s quarters, she discovers that it’s a letter written by Sansa and addressed to their brother Robb.

After Arya leaves the room, we see Littlefinger watching her from behind a column. He clearly knows he was being watched, and planted this letter for her to find. So what is it, exactly?

Remember when Sansa was in King’s Landing, betrothed to Joffrey? Cersei Lannister forced Sansa to write a letter to Robb and Catelyn at Winterfell, assuring her that she’s safe and that their father, the late Ned Stark, betrayed Joffrey. The letter also implored Robb to travel to King’s Landing and pledge fealty to Joffrey.

Catelyn, Luwin and Robb — RIP to all three of ’em — saw this letter for what it was: a message in Sansa’s handwriting that essentially came from Cersei’s mouth. It didn’t cross their minds that Sansa was actually a turncoat; she was basically a hostage in King’s Landing. But Arya doesn’t understand the context of this letter, and she’s already suspicious of Sansa.

She doesn’t think Sansa is harsh enough to the Northern lords who say they prefer Sansa ruling the North instead of Jon Snow. It irks her that Sansa is using their parents’ chambers. The first thing Arya even says to Sansa when they reunite in the seventh season is: “Do I have to call you Lady Stark now?” A cheeky icebreaker, yes, but it speaks to a truth about their relationship. Arya’s never understood nor respected Sansa’s ambitions to become a princess and, now, a political ruler.

Will this be enough to drive a permanent wedge between Sansa and Arya, or will Arya see Littlefinger’s deception for what it is? I’m still counting on Arya and Sansa working out their differences. Who knows, maybe Bran can nudge them in the right direction, since he pretty much sees everything in the realm. But it’s impossible to write off any potential outcome; Thrones has a long history of subverting expectations, after all.

Littlefinger and his fellow schemer, Varys, might not have the same level of control and influence that they did earlier in the show’s run. (One of several fan theories we’re tracking this season is about how the entire series is really just a shadow war between the two characters.) But Littlefinger, at least, isn’t as hopeless as I made him out to be following this season’s fourth episode.

It was my mistake to underestimate his sliminess; let’s hope the Stark children don’t make the same error.

— It still feels plausible that Jaime Lannister will kill his beloved Cersei, fulfilling the witch’s “valonqar” prophecy from the fourth Song of Ice and Fire novel, A Feast for Crows. But Cersei’s announcement in Sunday’s episode that she’s pregnant — assuming that it isn’t an elaborate ploy to ensure Jaime’s loyalty — could complicate matters. Would Jaime still cut Cersei down and save the realm from her tyrannical reign if she’s pregnant with their fourth child?

— There are still several characters that could end up being the reincarnation of Azor Ahai, the legendary warrior who defeated the White Walkers thousands of years ago. It seems likely that Azor Ahai is also the same legendary warrior that some prophecies refer to as the Prince That Was Promised and/or the Last Hero. (Long story short: They all serve a similar purpose in saving the realm.)

Now that Jon and a small crew of allies are heading beyond the Wall to capture a wight and present it to Cersei — in what is really the worst plan ever conceived — it’s possible that Jon could echo the Last Hero tale. In the first book, Winterfell nurse Old Nan tells Bran that the Last Hero sets out with horses, companions and a dog to face the White Walkers during the Long Night. (Jon’s with the Hound, so close enough.) But she never finishes the story. Just like with Gilly’s big reveal this week that Jon Snow might be a legitimate Targaryen heir, a man (in this case, Maester Luwin) interrupts Old Nan before she gets to the Last Hero’s fate. But she does mention that every one of the Last Hero’s companions, including the dog, are killed — so that same tale might spell doom for Jon’s entire party next week.

Game of Thrones airs Sundays at 9 p.m. Eastern on HBO.