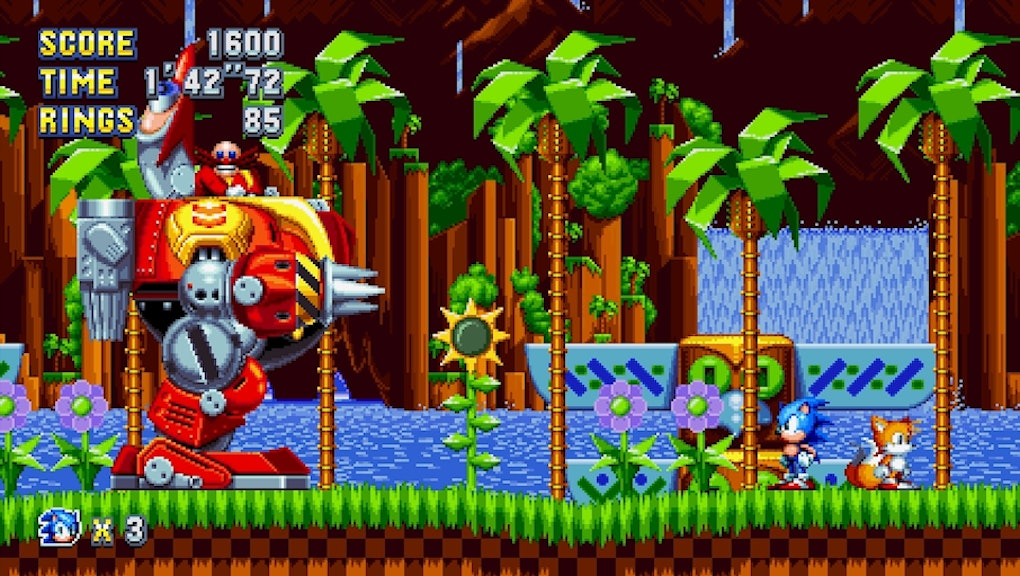 ‘Sonic Mania’ Review: The best ‘Sonic’ game in years is mostly just a remake — and that’s a shame

Sonic the Hedgehog’s legacy is a tough thing to hash out. One could argue that Sonic’s best days are well behind him, that he’s a relic of the 1990s animals-with-attitude mascot craze whose games have gotten progressively more embarrassing over time. That said, one could also posit that classic Sonic reached a level of aesthetic and level design magnificence that Mario (his chief rival in the early ‘90s) could never dream of.

There’s truth to both of those arguments, but as someone just young enough to have grown up with 3D Sonic games rather than the titles people actually champion as masterpieces, I lean towards the former. Simply put, I’ve been unsure for years that Sega could ever pull Sonic out of this rut of overly complicated, thematically bizarre and occasionally broken games he’s been in since the days of the Dreamcast. For quite a while, it’s felt like the world passed Sonic by.

But as far as indie developer and noted Sonic fan Christian Whitehead is concerned, that couldn’t be further from the truth. Whitehead teamed up with Sega to bring Sonic back to his roots with Sonic Mania, a side-scroller that recreates, remixes and adds onto Sonic’s Sega Genesis glory days. The new game offers some of Sonic’s finest hour in many years, but Sonic Mania still falls into some obvious traps that hold it back from its potential.

The new game offers some of Sonic’s finest hour in many years, but Sonic Mania still falls into some obvious traps that hold it back from its potential.

What’s old is new again, but still kind of old in Sonic Mania

The gist of Sonic Mania is that Whitehead, along with Headcannon and PagodaWest Games, have made a new 2D Sonic game largely using parts assembled from the first three Sonic the Hedgehog titles, as well as Sonic & Knuckles and Sonic CD. And, yes, that means you can also play as Knuckles. It looks and plays just like those old games, with the added benefit of a much higher resolution thanks to modern consoles. If you’re into classic Sonic, this is the game for you. But I’m guessing you already knew that without me telling you.

If you’re looking for a huge shakeup of the Sonic formula, look elsewhere. Sonic moves, jumps and spin dashes just like he did when he got his start. The only new mechanic is the drop dash, a move that lets Sonic get a small burst of speed upon landing a jump if you hold the jump button in midair. It’s not vital to finishing the game in any way, but stringing together drop dash combos is satisfying and I’m sure speedrunners will enjoy it.

I’m not going to dance around the biggest issue I have with this game: It relies far too heavily on the old at the expense of the new, despite the latter being routinely more dynamic and fun. There are 12 zones in Sonic Mania but only four of them are completely new. The rest share names and visual styles with zones found in older Sonic games. Their level layouts are often very similar, but it’s never exactly the same — new elements have been added in here and there for longtime fans to explore and discover.

That means if you obsessively played through Green Hill, Chemical Plant or any of the other classic Sonic zones that dominate Sonic Mania when they first appeared, you’re going to spend a lot of time doing things you’ve done before.

I can see the case for Sonic Mania featuring remixed versions of old zones. At its best, classic Sonic was about exploring huge, vertically oriented side-scrolling levels with tons of hidden paths and fun secrets to find. The fact that Sonic himself was marketed as a speedster is sort of misleading, as the fastest route through a level is rarely the most engaging. If I was more of a classic Sonic fan than I am, I probably would find some joy in seeing new versions of these zones.

When the remixed music of an old zone kicked in for the first time, I lost my shit.

Even with my casual, distant appreciation of the Genesis Sonic games, that still came through in spots. When the remixed music of an old zone I won’t spoil kicked in for the first time, I lost my shit. I did the same when old levels showed up in Super Mario Galaxy 2 or when Lon Lon Ranch appeared in The Legend of Zelda: Breath of the Wild. Throwbacks can work when spaced out smartly.

Unfortunately, Sonic Mania completely messes up the ratio of old to new. Four old zones out of 12 would have been fine, especially if the eight new ones had all been near as good as the four currently present in Sonic Mania. Studiopolis Zone brings an air of show business to the game, set in a nighttime cityscape full of screens and other fun production tools that do goofy things when you interact with them. Mirage Saloon Zone changes depending on whether you play as Sonic or Knuckles, with Sonic’s iteration relying on a new mechanic that adds some variety to the mix.

I frequently found myself having the most fun with these new areas, even if the old zones are technically comprised of new levels too. The totally fresh zones contain some of the more bonkers design elements in the game and the new music is incredible. It’s just a shame that there isn’t more of it. I realize Sega never sold this game as anything but an assemblage of classic zones with new stuff mixed in, but it’s still worth pointing out how much better it could have been.

Having said all that, I still think Sonic Mania will please those it intends to please. The best aspects of old Sonic design are here, with levels densely packed with bespoke mechanics and doodads to mess around with. As a friend said to me recently, a good Sonic level is like a theme park with lots of little rides to sample. Even though I didn’t love every single level in Sonic Mania, I found that to be true throughout most of the game. There’s a joy to goofing around with everything in a Sonic level that can’t be found in Mario or Mega Man.

It also helps that Sonic Mania is an aesthetically transcendent labor of love. It masterfully captures the essence of cool that was present in the blue hedgehog’s earlier adventures, but has been notably missing from his most recent outings. Whether that’s with personality-filled idle animations, funky-ass music or new special stages that look like Sega Saturn games, it’s obvious throughout Sonic Mania that this was made by people who understand what originally made Sonic dope, probably moreso than the people responsible for his later misadventures.

Sonic Mania masterfully captures the essence of cool that was present in the blue hedgehog’s earlier adventures, but has been notably missing from his most recent outings.

For all its faults, it’s tough not to find Sonic Mania lovable on some level. Sega farmed out its longtime mascot to indie developers it thought could do better, and the decision has paid off. Though there are scattered frustrating moments, its level design is generally tight, while some of the boss fights are worth seeing for novelty alone. I think Sonic Mania proves that, more than 25 years later, there’s still something to this character and this formula. My hope for the future is that Sega lets Whitehead and pals go nuts with whatever they do next rather than leaning so heavily on familiar favorites.