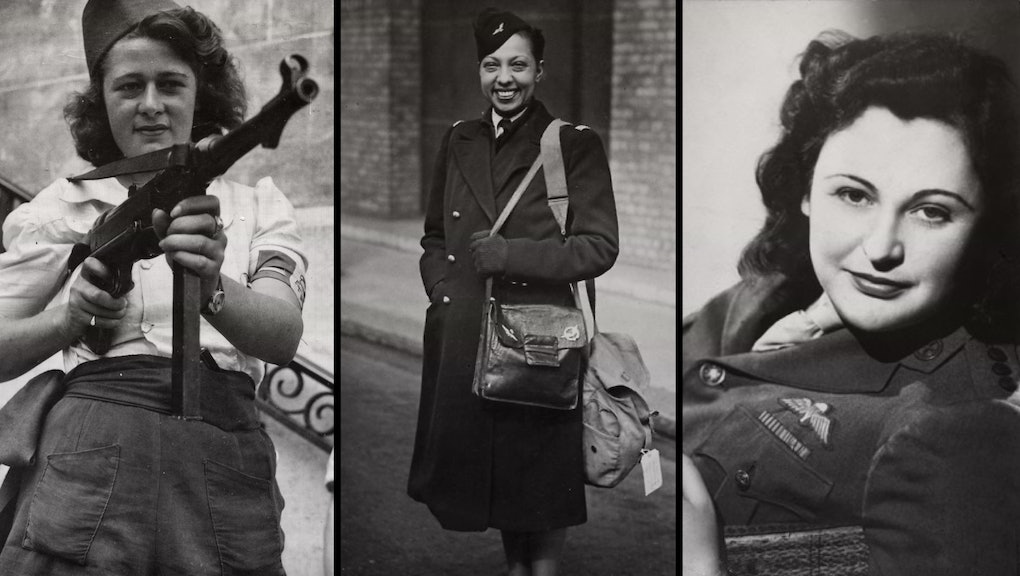 Unsung Style Icons: The women who fought Nazis before 2017

Over the weekend, a group of white supremacists and neo-Nazis took to the streets of Charlottesville, Virginia, carrying Tiki torches, guns and shields. They arrived wearing white polo T-shirts sloppily tucked into khaki pants, with some wearing the uninspired Make America Great Again hat.

In depressing and regressive times like these, it’s important to look out for glimmers of true goodness and courage that can encourage us to fight on. In our own personal search back in time for that, we found a good group to feel inspired by. Specifically, the absolutely extraordinary female resistance fighters during World War II.

Because celebrating these heroic women who were fighting Nazis before 2017 feels necessary right now.

Now don’t think style wasn’t something they cared about. Back during World War II, it turns out that these resistance fighters across France and Europe had a sort of uniform. As author and historian Anne Sebba, who authored a book on female resistance fighters in Paris, wrote for the blog Wonders & Marvels: “Women resisters working as couriers or delivering leaflets took to wearing culottes — trousers disguised as a skirt — since traveling by bicycle was essential and it was important for them not to draw attention to themselves.”

Women wore elaborate outfits as a sign of their resistance at the time too. “At a time when materials were rationed and often hard to come by, remaining fashionable was far from trivial for [Parisians] throughout the war,” Sebba wrote. “It became a matter of personal and national pride to dress in as beautiful and outrageous a way as possible. For many women this was the best revenge they could exert on their German occupiers.”

So to celebrate these incredible women who hated Nazis before 2017, here’s a select few who we think were particularly notable, incredible, courageous and yeah, fashionable as hell.

Known today as the “matriarch of resistance,” Nancy Wake ended up becoming the most decorated woman of World War II. In 1940, Wake started running messages and smuggling food for the French Resistance. As the war escalated, she began manning escape routes through France, saving more than an estimated 1,000 lives. By her own account, she killed a Nazi with her bare hands.

Her activities were heavily monitored by the Gestapo, Nazi Germany’s police force, with Wake given the nickname “The White Mouse,” because of her ability to elude capture. She became the Gestapo’s most wanted resistance fighter, with a 5 million franc price put on her head.

And if you’re doubting that fashion had any power at this time, Wake admitted that she used her dress and beauty to lure the Germans and get asked out on dates, where she’d acquire information. “A little powder and a little drink on the way, and I’d pass their posts and wink and say, ‘Do you want to search me?’” Wake told the Australian in 2011. “God, what a flirtatious little bastard I was.”

Look up “hero” in the dictionary and a picture of Simone Segouin (who’s still alive today) should pop up. It doesn’t, but it should. Segouin was a French resistance fighter who, during her time fighting Nazis, stole German bikes, captured 25 German troops, derailed trains and blew up bridges. She was just 18 years old at the time.

“One of the best days was when we arrested 25 German soldiers toward the end of the war,” Segouin said at an awards ceremony in 2016. “It felt good as we knew we would soon have our country back from occupation.”

In many pictures of her, including a colorized one, Segouin wears an enviable little cap, and those wide culottes popular with fighters, which could look like a skirt from afar.

Entertainer Josephine Baker might be most widely known for her banana skirt, her tremendous Broadway and Paris nightlife career and her civil rights activism, but what seems to be most impressive right now is that Josephine Baker was one of the craftiest operatives for the French Resistance, and a particularly good one at that.

Since she was a celebrity, she could travel around Europe without raising suspicion. She attended a ton of parties at embassies, where she snooped around and gathered whatever military and political information she could find that benefitted the allies. It’d be easy to think that she did all this in high style too, given her affection for fur, glitter and feathers.

According to History.com, she smuggled confidential information via invisible ink on her sheet music. She also turned her chateau in southern France into a refuge for Jewish refugees. After the war, she was awarded some of France’s highest military honors.

While living in Paris during World War II, Lefaucheux, who should be considered a style icon based on that hat above alone, and her husband became valuable members of the French Resistance, with their apartment actually becoming a headquarters for an organization that organized packages for political prisoners and their families.

Then when her own husband was arrested and deported to Germany, Lefaucheux followed the train on her bike, found out its destination and then orchestrated his escape.

For that, she received a number of awards and in the following years, continued to work in politics, working with the United Nations and serving as president of the National Council of Women.

Yeah, yeah, yeah. So Shosanna from the movie Inglourious Basterds isn’t a person who existed. We know. However, we would still like to take this opportunity in our current affairs to remember just how incredible Shosanna looked in Inglourious Basterds while bringing Adolf Hitler and his posse of doofuses down into a literal ball of flames.

An icon and an inspiration, just like every woman above and many more.