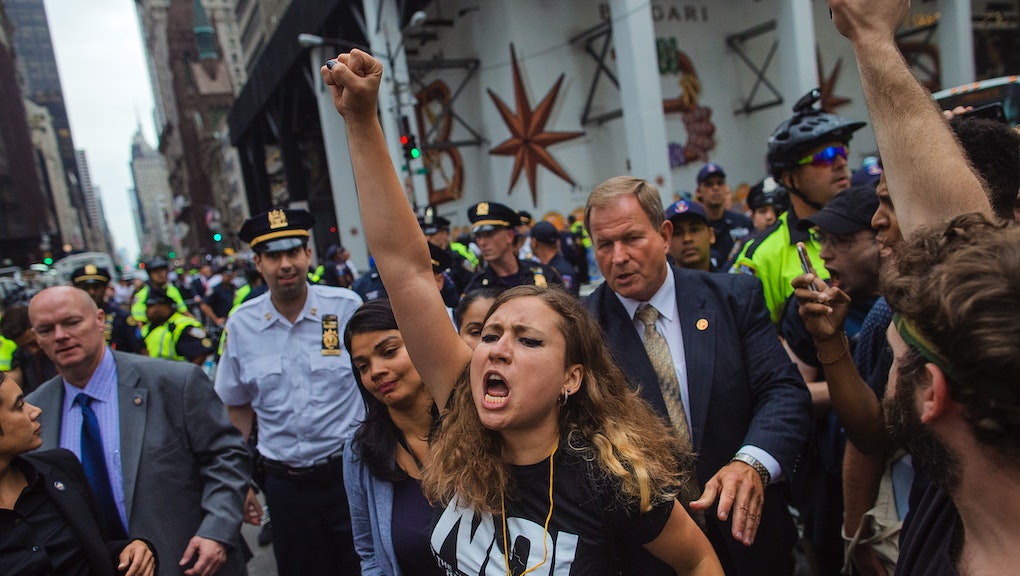 Protests continue across the country in the wake of Charlottesville

Protests in reaction to Saturday’s deadly white supremacist gathering in Charlottesville, Virginia, continued Monday night as demonstrators from New York City to Utah came out to condemn the hatred on display over the weekend.

In Washington D.C., protesters gathered outside the White House for the second night in a row, the Washington Post reported, to stand against racism and white supremacy and mourn Heather Heyer, the 32-year-old protester killed at Saturday’s extremist gathering.

“We will not stop until this type of white supremacy is removed from our country,” activist Jason Charter told the Post Monday.

In Durham, North Carolina, Monday evening, protesters who gathered to speak about Saturday’s violence in Charlottesville surrounded a nearby Confederate statue, tying a rope around it and pulling it to the ground, the News & Observer reported. Saturday’s white supremacist and neo-Nazi march had, in part, centered around a statue of Confederate Gen. Robert E. Lee in a Charlottesville park.

“This is really an opportunity, this moment of Charlottesville to see what side of history we are choosing to side with,” organizer Eva Panjwani, of the Workers World Party Durham, told the News & Observer at Monday’s demonstration.

“This is not a call to make someone to feel guilty or ashamed. This is a call to say this is an ask from people of color to say which side are you on.”

In Salt Lake City, more than a thousand people rallied on Monday night for a gathering to denounce the extremist rally in Charlottesville and to call on white allies to speak out against racism, the Associated Press reported.

“Those of us who know that racism has always been present have felt this shift, perhaps a turning point,” Kathy Abarca, the executive director of Racially Just Utah, said at Monday night’s rally. “Trump has made white power groups and other hate groups feel legitimate.”

At one point during Monday night’s protest in Utah, a man in the crowd holding a sign that defended white nationalists’ free speech began interrupting speakers, the AP reported. The crowd linked arms to box him out.