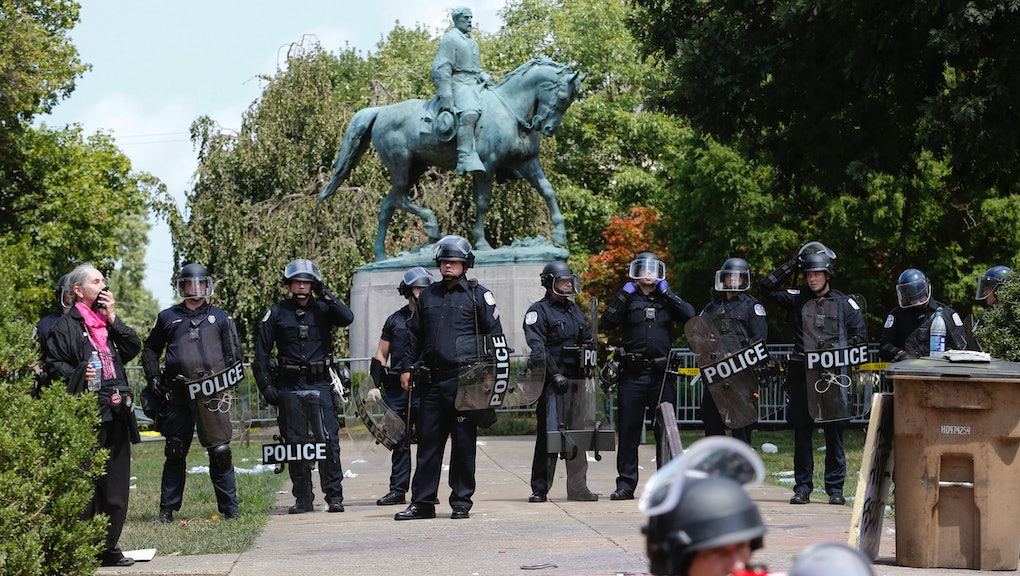 In May 1924, a 3-year-old girl named Mary Walker Lee pulled a Confederate flag from the back of a towering bronze statue, unveiling a cast of her great-grandfather astride his horse to the tens of thousands of onlookers gathered in Charlottesville, Virginia. Giving the public its first look at the city’s Robert E. Lee monument, the day’s master of ceremonies, Judge R.T.W. Duke, is said to have hailed the Confederate general as “the greatest man who ever lived.”

Nearly a century later, smaller but decidedly angrier crowds clashed at the statue’s feet, during a “Unite the Right” rally convened Saturday to protest the statue’s imminent removal. Confederate flags hoisted high, hordes of white supremacists hurled racist and anti-Semitic slurs at counter-protesters assembled to drown out hate speech from the other side. The confrontation quickly turned violent and eventually deadly after 20-year-old James Alex Fields, Jr. plowed his car into a crowd of demonstrators.

It didn’t take long for women to point out that the vast majority of the alt-right contingent appeared to be male; cue an apt reminder from the Cut that white women have always played a role in white supremacy. Mention of the Ku Klux Klan might conjure up imagery of an old white man hiding under a hood, but the women’s branch of the hate group was just as active, enthusiastically taking on the task of making white supremacy seem less extreme and more palatable to the mainstream.

The job of ensconcing the idea of Confederate glory and white dominion has traditionally belonged to white women operating within stereotypical gender roles: tending the children, influencing education and beautifying the landscape. That’s actually the reason we have so many of these Confederate monuments to begin with.

White women, explained historian and Western Carolina University professor Elizabeth McRae, “did all ... kind[s] of work to sustain the ideology and politics of white supremacy” in the late 19th and early 20th centuries. Men may be the “spokespeople” for the kind of rhetoric on display in Charlottesville, McRae acknowledged, but white women have always done the “daily, mundane work” of ensuring that “the public history of the nation ... privileged white experiences and white leaders.”

In the Civil War’s immediate aftermath, Ladies’ Memorial Associations sprung up to find and return Southern soldiers’ bodies to newly appointed Confederate cemeteries. That movement spun off a “heritage” organization called the United Daughters of the Confederacy in 1894, which devoted itself to public remembrance of members’ veteran ancestors. Charlottesville’s Lee statue was not a UDC endeavor — it was commissioned by a wealthy stockbroker (although UDC members did plan its dedication) — but similar works across the South exist because thousands of white women took it upon themselves to ensure the Confederacy and its cause never faded from public consciousness.

UDC membership was limited to “widows, wives, mothers, sisters, nieces and lineal descendants of such men who served honorably in the Confederate Army, Navy and Civil Service, or one of those persons who loyally gave material aid to the cause,” as well as women who could prove they’d pitched in on the Confederate war effort, and those women’s descendants. The daughters made it their duty to memorialize the Confederacy.

Per the UDC constitution, the organization’s aims were “to collect and preserve the material for a truthful history of the war between the Confederate States and the United States of America.” Karen Cox, a history professor at the University of North Carolina Charlotte and author of the forthcoming Goat Castle: A True Story of Murder, Race and the Gothic South, explained that those preservation efforts did not just entail monument building. While the UDC did devote itself to that task from its inception through World War I, bringing Confederate memorials out of cemeteries and onto municipal lawns — and very nearly erecting a monument to “the faithful slave mammies of the South” in Washington, D.C. — it also championed the treatment of children as “living monuments.”

To that end, the UDC involved itself heavily in state-level educational systems. According to McRae, this included lobbying textbook committees to spotlight whitewashed historical narratives that “either minimize[d] the black presence in American life or erase[d] it.” Essay contests where held on the importance of calling the Civil War the “War Between the States” and on why it should be considered an extended battle for states’ rights instead of a conflict over slavery. Teacher trainings and speaker series were held by the UDC at universities. Overall, women made concerted efforts to present a more validating version of the Southern story by imbuing children’s minds with a romantic idea of the pre-war past that future generations could then carry forward.

In this context, a little girl pulling the Confederate banner from her great-grandfather’s statue in front of laudatory masses seems a quintessential UDC stunt.

Cox — whose 2003 book Dixie’s Daughters: The United Daughters of the Confederacy and the Preservation of Confederate Culture details white women’s memorialization campaigns — emphasized that for many UDC members, monument-building was about honoring their ancestors. It also allowed these women a degree of autonomy outside the home, even the possibility of occupying a profession. That the women who climbed the UDC ladder saw no conflict in progress made at the expense of minority groups should not be surprising, because UDC women were white supremacists invested in maintaining white control.

These women “helped to undergird what was going on politically,” Cox explained. “It all works together.”

With that in mind, it doesn’t seem like a coincidence that the monument-building frenzy occurred in tandem with the rise of the KKK, and that the UDC was founded around the same time Jim Crow policies segregated the South in the 1890s. The elite members of the UDC were often wives or relatives of the politicians, governors, attorneys and judges creating those racist laws — men who might have been taking part in lynchings or cross-burnings.

“It was a violent and holistic effort to establish racial segregation legally, to build that system,” McRae said. “It took an incredible amount of ... cooperation across elements of white society. For me, I can’t separate the timing of the rise of Jim Crow with these white women’s effort to make sure that this particular Southern history ... serve[s] the present.”

And in the present, it’s worth remembering that winning the hearts and minds of future generations, incorporating physical reminders of white dominance into urban landscapes, asserting a version of history that elevates white heritage and implicitly reinforces racial stratification are all the products of white women’s daily efforts.

“One of the strains of the conversation after Charlottesville has been about the word fringe,” McRae warned. “I think when you look at white women historically, and even white supremacy presently …. we lose something just by focusing on what people call the fringe; we miss the dailiness of the effort.”

“I think there’s a notion that it’s outside of mainstream American life, and I think it’s inside mainstream American political life,” she added. “Rather than Charlottesville being outside the norm, it is an extremist expression of something that’s pretty normative in American society.”