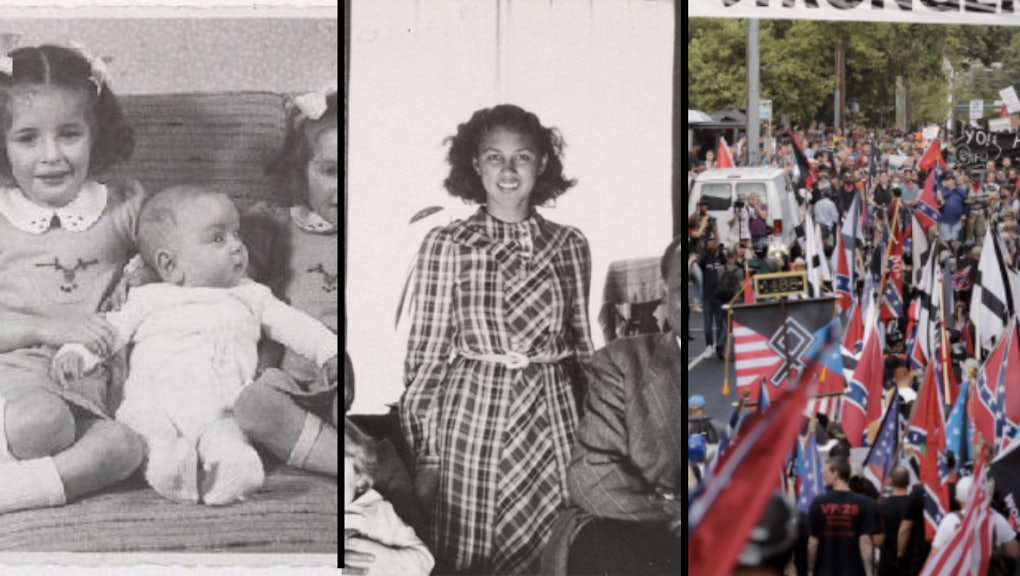 A Holocaust survivor on seeing the violent rally in Charlottesville: “It really hurts”

Alfred Munzer survived the Holocaust by hiding, living with a Dutch-Indonesian family who risked everything to take him in. His parents and two sisters all wound up in Nazi concentration camps — only his mother survived.

For Munzer, seeing the news of a violent gathering of white supremacists and neo-Nazis in Charlottesville, Virginia, on Saturday carried a particular kind of pain.

“To see people carrying Nazi flags, it’s frightening. It’s also saddening,” Munzer said in a phone call with Mic on Tuesday. “Because it really means that the terrible lessons of the Holocaust haven’t been learned.”

“It took a really long time to understand.”

Munzer was born in the Netherlands in 1941, to parents Simcha and Gisele, Jewish immigrants who had come to Holland from Eastern Europe in the early 1930s, just as Adolf Hitler was coming to power in Germany.

Holland had been invaded in 1940, so Munzer was born under Nazi occupation. He was less than a year old when Jewish men in the Netherlands began to receive orders to report to Nazi labor camps. That’s when his family decided to go into hiding.

The family decided to split up “as a form of insurance,” Munzer said. His sisters, Eva and Leah, were sent to live with a “very religious Catholic woman,” and his parents went to hide in a psychiatric hospital. Munzer was at first put in the care of a family friend, but when she got too nervous after run-ins with Nazis, he was sent to live with her ex-husband, Tolé Madna, who was from Indonesia.

The Madna family adopted Munzer as their own — especially Mima Saïna, the family’s nanny and housekeeper, who became Munzer’s surrogate mother. Munzer said Saïna would walk for miles to get milk for him; he wasn’t allotted any rations because he was living there illegally.

“I was told I slept in [Saïna’s] bed every night,” Munzer said, adding that “she had a knife under her pillow, vowing to kill any Nazi” who came for him.

Still, it was clear even to Munzer as a child that he was in danger. Some of his earliest memories, he said, are of being hidden in the basement while the house was being searched.

Munzer survived the Holocaust hidden in the Madnas’ home, but his sisters, mother and father were all rounded up and sent to Nazi concentration camps. His sisters were killed at Auschwitz. His father survived to see the camps liberated by Allied soldiers, but died two months later.

Of his immediate family, only Munzer’s mother survived. His memories of being reunited with her after the war were that he was crying, refusing to sit on her lap “because she was a complete stranger.”

In 1958, Munzer and his mother immigrated to the United States.

“My mother and I left Europe to get as far away as possible from the memories of the Holocaust, all the losses,” he said.

“It took really a long time to understand” what had happened to his family during the Holocaust, Munzer said. He began to ask his mother for stories — to hear from her and her friends who survived about the ways people coped with the horrors of genocide.

Munzer went on to medical school, became a pulmonologist and later president of the American Lung Association. He settled in Washington, D.C., with his husband, Joel. He volunteers at the United States Holocaust Memorial Museum, where he tells his story to visitors.

“We really never expected that we would confront the same hate in the U.S.”

As a survivor of the Holocaust, Munzer said Saturday’s events in Charlottesville were alarming. “We really never expected that we would confront the same hate in the U.S. — that’s what we were running away from,” he said.

But in past year, as reports of anti-Semitic incidents are on the rise — and in the wake of the disturbing display of racism and anti-Semitism in Charlottesville — Munzer said he is scared.

He said the scene at the “Unite the Right” rally — the signs, the marchers with Nazi flags, the deadly violence — shows that “the same seeds of prejudice, discrimination, hatred that ended up leading to murder” in his youth are here too. For him — and other Holocaust survivors he knows, many of whom are older with clearer memories than him — the news from Charlottesville was painful.

Still, he said, there are ways to combat hate — and it requires leadership that condemns hatred and bigotry: “I really expect our leaders to speak up and stand up for what is right ... without being prompted.”

Ordinary people can also make a difference, as is clear from Munzer’s own story. “Even when surrounded by hate,” he said, regular people can, and should, do the right thing.

“That was certainly true for the Madma family,” he said, “and frankly, if there had been a thousand times as many [like them], the Holocaust wouldn’t have happened.”