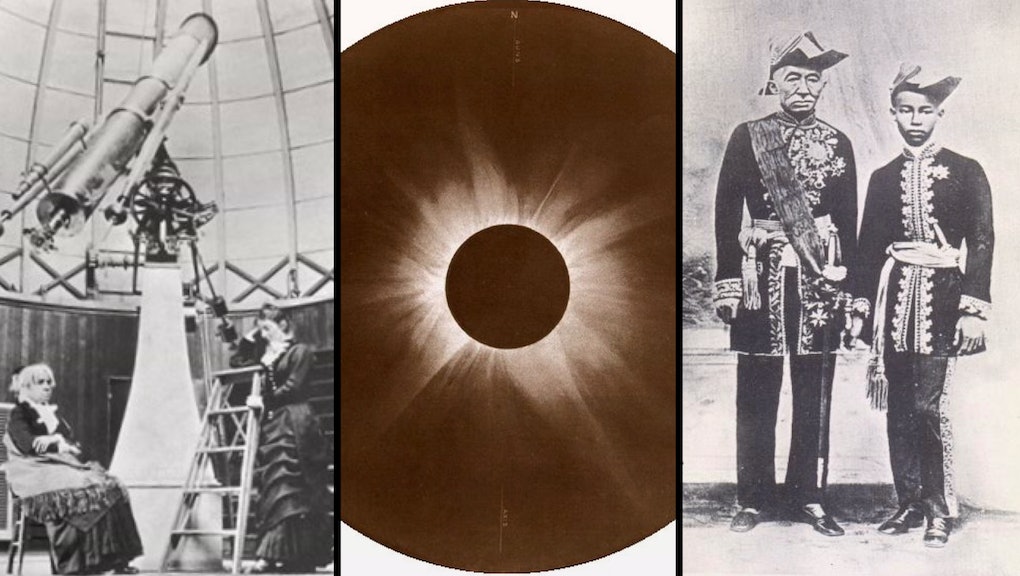 If you’re planning a trip to watch the solar eclipse on Aug. 21, you’ll be partaking in an incredible, 150-year-old tradition. Particularly in the early years, they were dangerous, expensive and time-consuming. In case you run into traffic or clouds and need a bit of perspective, here are the stories of three historic eclipses and the lengths people took to see them.

One scholar argues the first true eclipse expedition came in 1868. The king of Siam (now Thailand) at the time, Mongkut, had spent 27 years as a Buddhist monk and studying astronomy as a hobby before becoming king. When he did finally take the throne, he kept up his hobby — not just because he enjoyed it, but also because he thought it could help convince Westerners to respect his kingdom and convince his subjects to embrace Western science as a tool.

So when he realized a solar eclipse was coming, he was determined to see it — and to bring both foreigners and subjects along for the experience. He calculated it was due to pass over a remote corner of jungle called Wako, southwest of Bangkok, on Aug. 18, 1868.

He ordered a palace to be built on the site and headed out with his heir and a thousand courtiers. They traveled in high style, with 50 elephants and a host of other pack animals. Clouds almost ruined the event’s drama, but they cleared out early in the eclipse. While European scientists observed the unusually long totality, Mongkut led a series of religious rituals, balancing science with spirituality.

Suddenly, Mongkut’s obsession with astronomy seemed less like a joke to the nobles and astrologers who had looked down on his hobby. In fact, when the king got back to the capital, he found a way to get back at his haters: He wrote them a scalding letter, which he made them copy over and over; threw them in prison for a week; and made them do community service.

Unfortunately for Mongkut, Wako was full of mosquitos, and he caught malaria and died soon after his triumphant return. His son, who survived his own bout with the disease, later decorated a temple with an image of Mongkut at the fateful eclipse.

This was also a remarkable eclipse for science as a whole: Further west along totality’s path, the element helium was identified for the first time.

The western U.S. had a chance to shine in 1878, when a total solar eclipse was due to pass over the Rockies. Cleveland Abbe, who later founded the National Weather Service, headed to Pike’s Peak hoping to watch the eclipse at 14,000 feet above sea level.

The elevation was appealing because, at the time, scientists weren’t sure that the ring visible around the moon during totality, called the corona, belonged to the sun. They thought it might be a side effect of how light comes through Earth’s atmosphere, which would be less of a factor at higher elevations. The height would also let Abbe see the movement of the moon’s shadow.

Unfortunately, Abbe came down with a serious case of cerebral edema, or brain swelling, from the altitude, and had to be carried down the mountain — despite his loud protestations.

Maria Mitchell, an astronomer at Vassar College, gathered a group of her graduates in hopes of promoting women in astronomy and headed west, where her experience was also a bit rocky. The railroads lost their luggage and they spent their time out west in tents.

They stayed with a friend of Mitchell’s in Denver, whose property spanned 600 miles. “I felt that the hospitality of the Rocky Mountains was at my feet,” Mitchell said of the experience. “Space and time are so unconnected! For an observation which would last two minutes forty seconds, I was offered six hundred miles, after a journey of thousands.”

Even Thomas Edison was eager to catch the 1878 eclipse, traveling to Wyoming to see it and to measure how hot the sun’s outer layer is. He failed; the instrument he developed wasn’t up to measuring the sun’s incredible heat.

The Lick Observatory in California decided a total eclipse predicted for 1908 was worth quite a schlep. The observatory’s director, William Wallace Campbell, tackled the logistics of getting to the middle of the Pacific, setting off in November the previous year, first with a 12-day steamer ride from San Francisco to Tahiti and then with a lift from a U.S. gunboat to reach the remote Flint Island on Dec. 9.

Campbell’s wife, Elizabeth, came too, as the only woman on an eight-person team. She was used to traveling with the astronomers and helped produce packing lists. For Flint Island, her list filled three pages, including 100 pounds of sugar, 230 of flour, three dozen jam jars, 60 pounds of bacon and her husband’s favorite snack of graham wafers.

All told, the Flint Island expedition brought 40 tons of supplies in more than 300 boxes, each numbered to facilitate customs and unpacking. Some of the equipment included a 40-foot camera, which looked like a giant tube and was propped up on a tall wooden tower; a set of eight cameras meant to look for hypothesized tiny planets between the sun and Mercury; and a range of spectrographs.

The observers were blindsided by a quick rainstorm the morning of the eclipse, but reported that “the last drops fell at two or three seconds after totality began.” A few minutes later, and just like that, it was over — the team took down their camp and started loading the boat the very next day.