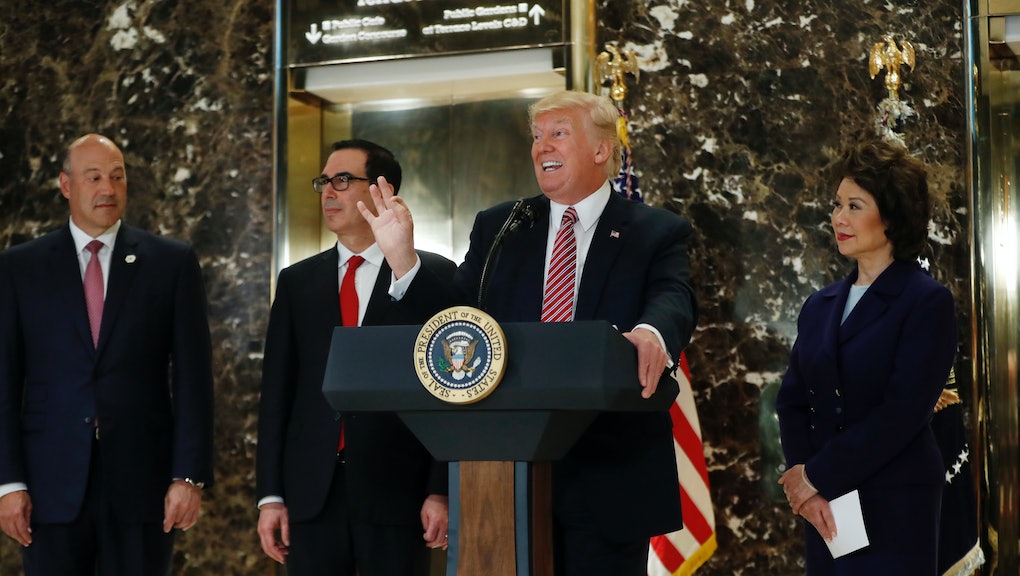 President Donald Trump announced at a Tuesday afternoon press conference that he would sign an executive order streamlining the permitting process for construction on federal infrastructure.

Trump promised that if the project in question did not meet environmental standards, the federal government would not improve it.

To demonstrate how the permitting process as it currently exists stifles production on infrastructure, the president rolled out a massive flowchart he claimed showed all of the steps an applicant must take to have a permit for highway construction approved.

He then offered the “long, beautiful chart” to a member of the media.

Though the president did not immediately clarify how his executive order would streamline the federal permitting process on infrastructure, it was previously reported that Trump was expected to eviscerates a key portion of former President Barack Obama’s Federal Flood Risk Management Standard, which was implemented by executive order in 2015.

That order sought to bring a “climate-informed science approach” to a decades-old guidance on floodplain construction by ratcheting upwards the height requirements on federally funded infrastructures so that they might withstand the rising sea levels and more frequent, more extreme storms caused by climate change.

In the 2015 order announcing the standard, the Obama administration maintained that “[improving] the resilience of communities and federal assets against the impacts of flooding” would mitigate damage to “the environment, our economic prosperity and public health and safety, each of which affects our national security.”

A government official told Reuters that Trump’s decision would “streamline the current process” of approving construction on infrastructure. But one expert warned that such expedience would come at a price — in this instance, billions of dollars to the American taxpayer.

“The Trump administration is acting very rashly in part out of the desire to undo a climate measure under the Obama administration,” Eli Lehrer, a flood policy expert, told Reuters. “This is an enormous mistake that is disastrous for taxpayers. [The FFRMS] would have saved billions of dollars over time.”