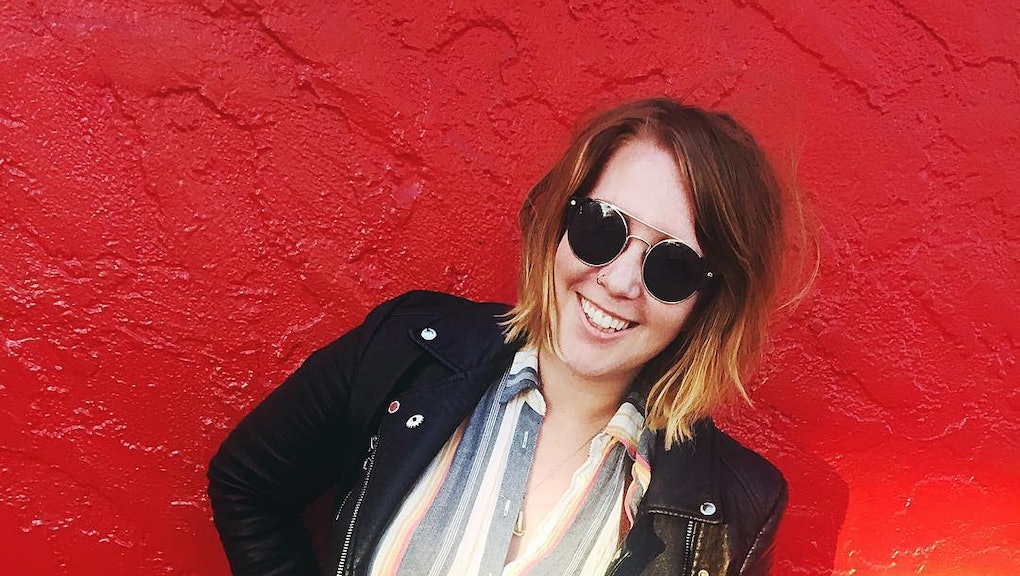 It’s been five months since Chelsea Leibow came into the spotlight. The former Thinx employee accused Miki Agrawal, the company’s founder and CEO at the time, of sexual harassment, in a story broken by New York magazine. (Since then, Leibow said, the matter has been resolved to the “mutual satisfaction of all parties.”)

Before that, the internet had met the 26-year-old professional in a Jezebel post titled, “A Celebration of the Beautiful, Lightly Deranged PR Emails We Get From Period Undie-Makers Thinx,” published back when Leibow was still head of public relations at the underwear company.

Mic caught up with Liebow to talk about working in the sexual health industry, running her own company, and healing from a traumatic experience.

Mic: Tell me about what you do, and who you are as a public relations representative.

Chelsea Leibow: I am the anti-PR-girl PR girl. What that means is — not to throw any sort of shade at anybody else in this industry — but to really challenge the conception and perception of what a PR person is. Especially women, I think we get a really bad rap in the media for what we do. It’s seen as very vapid and self-absorbed and frivolous, and there’s so much more to so many people that are in this industry.

That’s why I’m trying to challenge that and poke a little fun at it in the process.

You have a really unique take on doing that, and people have obviously picked up on it.

CL: I was really fortunate and very surprised. Last August an article came out about me in Jezebel, and I didn’t know it was happening. ... It was a story about my pitching ... It was actually screenshots of my pitches, and she was just talking about how they had really brightened her day. Obviously, the goal here is to get stories for my clients, but I do it in a really fun and interesting way. I don’t approach PR from a traditional point of view at all. I always try to make it really funny. I try to make it relatable. At the end of the day, I just kind of try to humanize the whole experience, because it really is a transaction.

Right now you’re basically fully representing female-founded companies in the sex and wellness space. Is there a reason for that?

CL: Yeah, I think that women-owned companies and women-run companies that are making products that help make women’s lives better are just super interesting to me — obviously, as a woman. But I also just really want to work with brands that have the same values as I do.

My first PR job ever was in an agency, and I was representing beauty brands. Probably about six months into that job, I realized that it started affecting my own self worth, and I was starting to feel like maybe I needed all of the products that I was pitching day in and day out to make women feel better about themselves.

Women are shamed no matter what they do. Do you think the companies you represent are helping to change that, and are a part of the puzzle shifting our culture into one of consent?

CL: I think it’s a really complicated, socially ingrained issue that our country has that stems from a lot of other things. I think the thing that I can do as a consumer is put my buying power into brands that align with how I think and feel as a woman, and brands that are women-run and woman-founded. That’s something that everyone can do, is really just take control of your wallet and put your money and your time and your energy and your brand loyalty toward brands that really align with who you are.

It can be difficult to find that, and I think it has been for a lot of women up until recently, but I’m so thrilled at the amount of companies that are stepping forward to say that not only do they align with these views, but they are creating and innovating products that help women everywhere and help make women’s lives better.

Do you have any advice for teens that might be growing up now that are still questioning their bodily autonomy, like, “Can I wear this outfit? Can I touch myself? Is this okay?”

CL: You should do within reason what feels good to you. Nothing is dirty, it’s your body, it’s beautiful. It’s meant to be explored at that age. Just be careful with it and be able to recognize that everybody moves at different paces. You don’t have to do the things that your friends are necessarily doing, but really just follow your own gut and your own intuition and you’ll be fine. We all got through our teen years.

Nothing is dirty, it’s your body, it’s beautiful.

What has the process of healing looked like for you, and do you think that the experiences you went through will ever be fully healed?

CL: It was definitely difficult. The first, maybe, four months of the year were really rough. I was put into a situation that I’ve never been in before and hopefully will never need to be in again. I had to make really tough choices about what was going to be best for me. I think when people are put in those situations it’s really hard to know how you’re going to handle them, but I think overall I’m super proud of how I’ve handled everything.

It’s been a big learning process and a really emotional process in general, but I’m so lucky that I have an amazing support system and people really came out of the woodwork to be supportive. The thing that I was most worried about was losing potential new jobs or current clients because of the press. That didn’t happen. Instead, everyone was super supportive, and I’m so grateful for that, that people have really seemed to understand and I can continue doing work that I love.

Whitney Bell’s letter to Kesha really resonated with me — the dichotomy between being the survivor and being the victim, and how society really pressures you to pick a label and play its trope. Has this duality played out for you, too?

CL: There is a perception in society that once something’s done and over and the book’s closed on it, that that means that everybody has moved on. Once it’s not in the news cycle anymore or moves farther and farther away from being immediate, that it just goes away completely. I know for me that’s certainly not the case. I’m taking care of myself, I’m in therapy, which has been an amazing help for me to be able to kind of sort through feelings and thoughts. I think for me, especially as it was nearer to that timeline and that situation, there were good days, there were bad days. There were days where I just wanted to curl up in a ball and cry all day long. There were days where I was like, “No, fuck it. I’m just going to work and throw myself into that.”

Giving yourself permission to feel is super important, and permission not to be a perfect person, which is something that I’ve been working on a lot. Just giving myself permission to screw up I think is super liberating, and knowing that we’re all human, we all make mistakes, we all have good days and bad days. Just important to remind ourselves, especially when you work in an industry where it’s really cutthroat and fast-paced. It’s important to leave room for error and leave room for yourself.

Everything that you went through was extremely public and very much in the media, but now you have a thriving business that not many people know about. If I Google your name, most of what I see is stuff that happened in the past. Is that something that bothers you?

CL: The internet is forever, and things that are said on the internet are linked to your name forever. But I think for me, I’m really just trying to move forward and I really, honestly am so busy and caught up in all of the stuff that I’m doing now, that I actually forget ... that is the thing that comes up when you search my name. Hopefully one day it won’t be the first thing you see, but I’m also really lucky to work with people that get it and are super supportive and who ask questions if they need to, but for the most part no one has really batted an eye about any of that stuff.

Do you have advice for other women who may be going through similar situations?

CL: Yeah, I think really follow your gut and be able to dig deep and make the decision that’s right for you. Maybe it’s not the decision that I made, and that’s totally okay. There’s a lot to consider when trying to go through a process like this. There’s no one right solution for anyone. Just trust in yourself. We’re stronger than we think we are — absolutely, 150% I believe that now. I thought that going through something like this would just completely ruin me, and I’ve come out the other side of it feeling so much stronger and so much smarter.

But really, I would never say that there’s a one-size-fits-all solution for this. If you’re going through something similar, talk to people you trust. But really, trust yourself, because you’re the one who has to make these decisions at the end of the day.

Do what’s right for you.