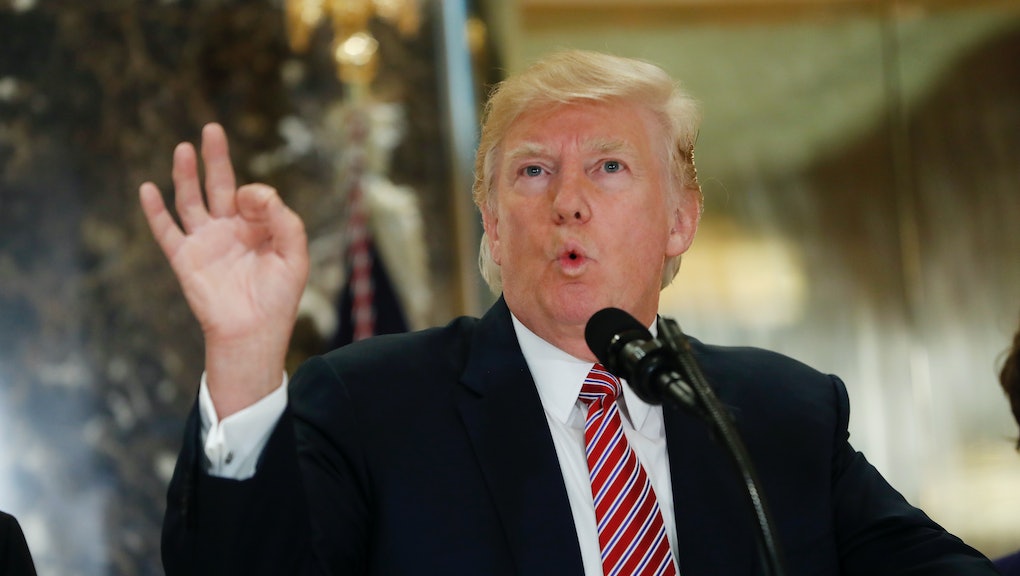 At a scheduled appearance from Trump Tower in New York City to announce an executive order gutting restrictions on the federal infrastructure permitting process, President Donald Trump went off-script to rebuke what he termed “the alt-left” for its role in the violence in Charlottesville, Virginia, on Saturday.

Trump went on to defend the “Unite the Right” rally’s decision to protest the removal of a monument to Confederate general Robert E. Lee, suggesting that this was a slippery slope to toppling statues of founding fathers and slave owners George Washington and Thomas Jefferson.

“So this week, it is Robert E. Lee. I notice that Stonewall Jackson is coming down. I wonder, is George Washington next week, and is Thomas Jefferson the week after?” the president asked. “You really have to ask yourself, ‘Where does it stop?’”

The president also defended some of the white supremacists and neo-Nazis at the Saturday rally as “very fine people.”

Trump’s remarks — which put the largely peaceful counter-protesters in Charlottesville on a par with the white supremacists they assembled there to protest — are a return to his widely criticized remarks from the weekend.

On Saturday, in the wake of the death of Heather Heyer, a 32-year-old woman who was killed when a driver plowed his vehicle through a crowd of Charlottesville counter-protesters, Trump decried the violence “on many sides,” suggesting that anti-racism counter-protesters were just as complicit in the harrowing display of violence as the neo-Nazi and white supremacist demonstrators.

“We condemn in the strongest possible terms this egregious display of hatred, bigotry and violence on many sides, on many sides,” Trump said, speaking to reporters from his golf course in Bedminster, New Jersey.

On Monday, under pressure from his own party, he gave an unscheduled speech that offered a specific denouncement of the KKK, neo-Nazis and white supremacists.