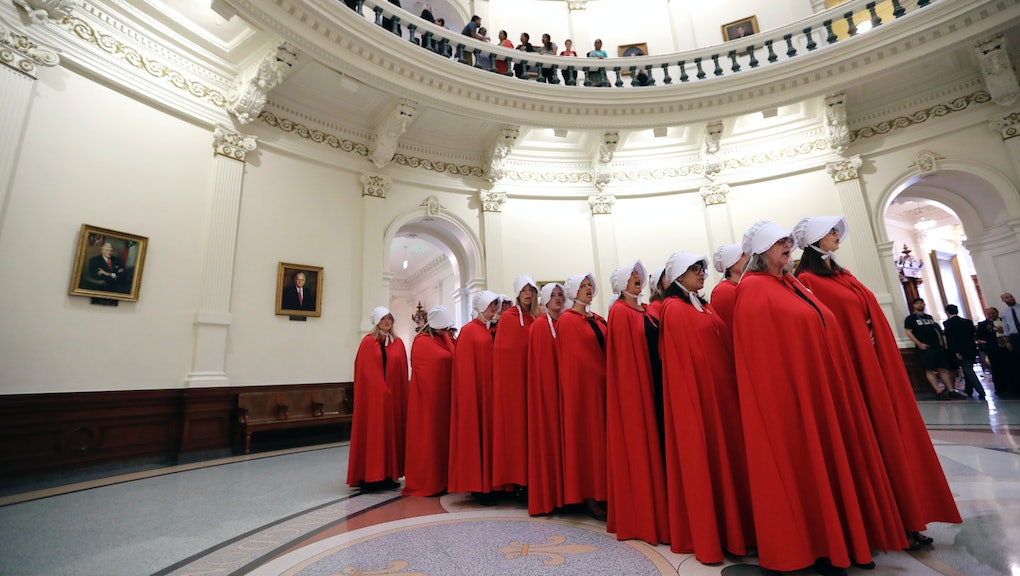 As Oregon expands insurance coverage for abortion, Texas cuts it

Some good news and some bad news: On Tuesday, Oregon Gov. Kate Brown signed a bill vastly expanding insurance coverage for abortion and birth control, while in Texas Gov. Greg Abbott scaled it way back.

“Shame on you, Gov. Abbott, for attacking Texans’ health and rights,” Cecile Richards, Planned Parenthood Federation of America president, said in a statement. “It’s wrong for politicians to withhold a woman’s health coverage just to try to stop her from having an abortion. Each woman has the right to make her own decisions about her body and her family, and that shouldn’t be up to a politician.”

Signing House Bill 214 into law, Abbott said he was proud to help ensure that “no Texan is ever required to pay for a procedure that ends the life of an unborn child.” The legislation doesn’t exactly do that, though. HB 214 — the fruit of Texas lawmakers’ labors in their abortion-heavy special session — eliminates abortion coverage in state-sponsored private insurance plans, except in the case of a “medical emergency.”

Those with the aforementioned plans who suffer “life-threatening physical condition aggravated by, caused by or arising from a pregnancy” can receive coverage for termination, but people whose pregnancies result from rape or incest — two instances in which even the federal government will help fund abortions — cannot. Along with every other prospective abortion patient, they must buy supplemental plans that do cover the procedure, leading Democrats to accuse HB 214’s supporters of making Texans purchase “rape insurance,” according to Reuters.

Also on Tuesday, Abbott signed House Bill 13, which obligates abortion providers to report more details to the state on procedures that go awry. Complication rates for abortion tend to be pretty low, at least in states like California that have robust public health programs. Unfortunately for Texas residents, the Lone Star State isn’t one of those.

“Gov. Abbott is hell-bent on cutting off access to reproductive health care, regardless of how many women he hurts. It is a disgrace,” Gutierrez said. “In a state with rising maternal mortality rates and the highest rate of uninsured, we should be expanding access to health care — not taking it away.”

Meanwhile, in Oregon, Gov. Brown signed House Bill 3391, a bill that, according to the Washington Post, is being hailed as “the nation’s most progressive reproductive health policy.” Aptly titled the Reproductive Health Equity Act, the legislation provides for co-pay-less abortion and contraception, and earmarks state funds to ensure that noncitizens ineligible for Medicaid can access reproductive health services.

“As states across the country are stripping women of reproductive health services and coverage, Oregon is leading the way in not only protecting the right to legal abortion but in expanding coverage to ensure that no one is denied access to vital reproductive health services, from contraception to postpartum care,” Grayson Dempsey, executive director of NARAL Pro-Choice Oregon, said in a statement.

The RHEA categorically answers the many reproductive health questions raised by the Donald Trump administration. It affirms the terms of Roe v. Wade on the state level, in the case that the landmark Supreme Court case legalizing abortion is overturned on the federal level. It expands insurance coverage for preventative reproductive care, postpartum services and birth control, regardless of a patient’s gender identity.

“This bill fills gaps in our current laws so that Oregonians will be covered for their reproductive health needs whatever their income, citizenship status, gender identity and expression, or however they are insured,” said Amy Casso, gender justice program director of Western States Center, an organizing group working for racial, gender and economic justice.

“We applaud our legislators for passing the Reproductive Health Equity Act,” Casso added.