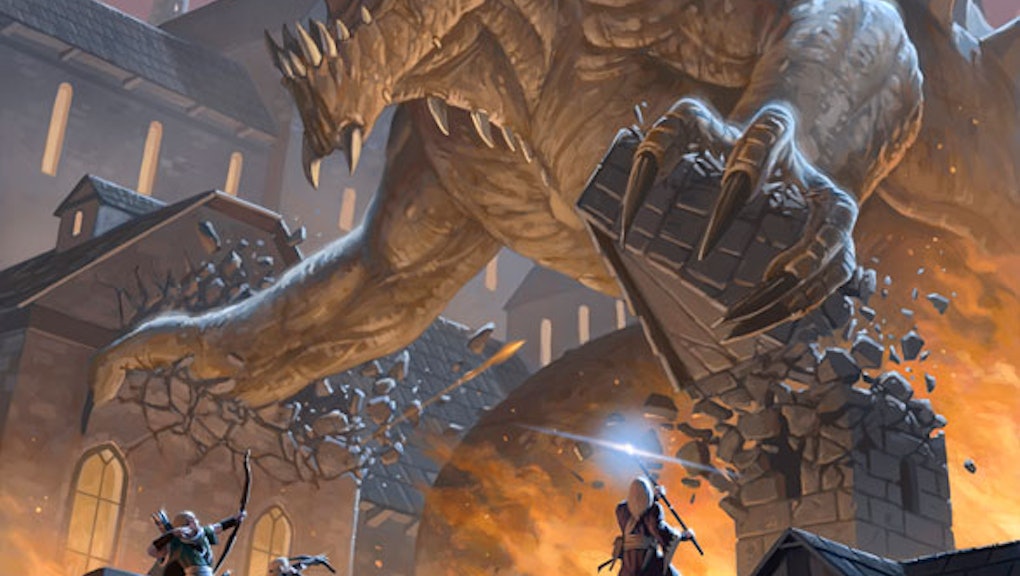 ‘D&D Beyond’: The possibilities of building roleplaying-game communities over long distances

On Tuesday, Wizards of the Coast announced that it has listened to its fans and has created a service, called D&D Beyond, to provide Dungeons & Dragons lore, rules, adventures and a much needed character builder to players who wish to move their gaming into the digital age. This has broader implications for long-distance tabletop gaming, especially in terms of accessibility.

While services like Roll20 and Tabletop Simulator have done a brilliant job of filling the digital gap, Wizards of the Coast — the publisher behind D&D and Magic: The Gathering — has all but ignored its digital audience for a number of years. Our friendships are defined by parameters other than proximity, so it can sometimes be difficult to get a group together to play a pen-and-paper roleplaying game campaign in a complex realm like Dungeons & Dragons.

An official product meant to alleviate this issue is welcome, but is it the solution that fans have been waiting for?

D&D Beyond: The ritual of physical presence and togetherness

Dungeons & Dragons has long been the realm of in-person gatherings in basements, kitchens and empty community centers on a Sunday afternoon. About 100 internet years ago, way back when I was a little kid, I used to play these kinds of games with my dad and his friends as they sat around the enormous gaming table in the basement of our old house.

It was a monthly ritual for a long time — they’d show up with their dice, player sheets and rulebooks, my mother would have coffee ready and they’d get ready to dungeon dive with D&D Second Edition until the wee hours of the morning.

The only requirements for entry were to show up and bring your roleplaying stuff.

Years later, somewhere around 2006, when I started up my own pen-and-paper RPG nights, we did much of the same. We’d gather at my place, beer and unhealthy Canadian snacks in hand, and the only requirement would be to show up. I kept the characters and books at my place, so they had nothing else to bring, except for themselves and maybe their preferred snacks.

We drifted apart, much as friendships created in one’s twenties often necessitates, as we moved to different cities, got married and had children or shifted priorities elsewhere. And by the time we started nearing our thirties, the gaming group was scattered to all ends of the continent. There was little hope in getting our proverbial band back together.

At the time, we had Google Wave and Skype, which was decent enough for keeping track of our rolls and the changing landscape of the campaign. But as soon as Google announced that Wave would be discontinued, we didn’t have anything else to turn to. We didn’t have Slack yet, and Roll20 hadn’t been put together.

The ritual of physical presence was more than a passing desire — it was a necessity to play.

But in the modern gaming world, the tools have evolved to match the needs of the players. The advent of Roll20 and Tabletop Simulator was a step toward what gamers needed to connect with their gaming communities over great distances, but there was no first-party support for games like Dungeons & Dragons or Shadowrun, or even Numenara.

D&D Beyond: It’s going to be very expensive to start using this service

It’s important to note that while a number of adventures, sourcebooks and rules are available through D&D Beyond, players who’ve purchased physical books won’t be able to access those books’ digital versions. You’ll be able to purchase the digital books at a discount, thankfully, but it doesn’t balm the hurt of hundreds of dollars spent on physical books that aren’t redeemable for the online version.

The website notes that players will be able to purchase core class bundles in the future, but as of mid-August they’re not yet accessible. At the moment, you can purchase subclasses, backgrounds, feats, subraces and spells both individually and bundled per category. You’d think that if you subscribe, you’d be able to access the core rules and such as part of your subscription, right?

The subscriptions (either Hero or Master level) provide the same access as the free accounts, but there are no ads and you can have as many characters as you’d like. Whatever you decide for a subscription, be it paid or free, you still need to purchase the content itself.

Getting started with D&D Beyond will cost you. There’s the $19.99 you’ll need to fork out for the Player Handbook and another $19.99 for the Dungeon Master’s Guide, not to mention all of the various supplemental material for both core books. You could opt for a free account, which will give you six character slots, but those will fill up fast, especially if you’re experimenting with builds. So, it’s a $25.99 annual subscription for a Hero tier subscription, which will net you unlimited character slots, or $54.99 annually for Master tier, which allows you to share your purchased content with your core roleplaying group.

It’s a hefty chunk of change to get rolling with D&D Beyond, even though it’s entirely digital.

D&D Beyond: How we can build long-distance RPG communities with digital tools

There’s a reason why I started storing all of our various tools and roleplaying books in one place. Having to drag six sets of books, character sheets, graph paper and pencils to someone’s house every single week (or sometimes twice a week) is a frustrating prospect.

Someone always forgets something, be it their sheet or their Player Handbook. Forgotten dice are easy to remedy; forgotten character sheets are not. By moving everything to digital supplements (including a character builder), players will be able to toss their tablets or laptops in their bags and fill the extra space with Hawkins Cheezies or whatever Dogfish Head is brewing at the moment.

For players who are fairly local to one another, D&D Beyond is a great tool to prevent the need for a Bag of Holding, but it doesn’t solve the problem of long-distance gaming outright. The problem with long-distance gaming isn’t the accessibility of rules (although it’s useful if your tiny hometown doesn’t have access to a FLGS) — the issue is being able to connect with your friends over the internet without the need for a multiple camera setup.

Roll20 has pieces of D&D Beyond built into it, in the sense that there are core D&D rules baked into the interface, but it expands what players and Dungeon Masters are able to do without having to be physically present. You can build maps, characters and even roll simulated dice without any custom scripting. Roll20 also has video chat built in so that you can feel like you’re sitting around a virtual table even when you’re thousands of miles apart.

Long-distance gaming won’t fill the void for an in-person gaming group, and it won’t replace those great memories of sitting in a basement around a rickety table, rolling dice and cheering with your friends. But D&D Beyond will help you to spend time with the people you care about doing what you all love most: slaying dragons and delving through dungeons.