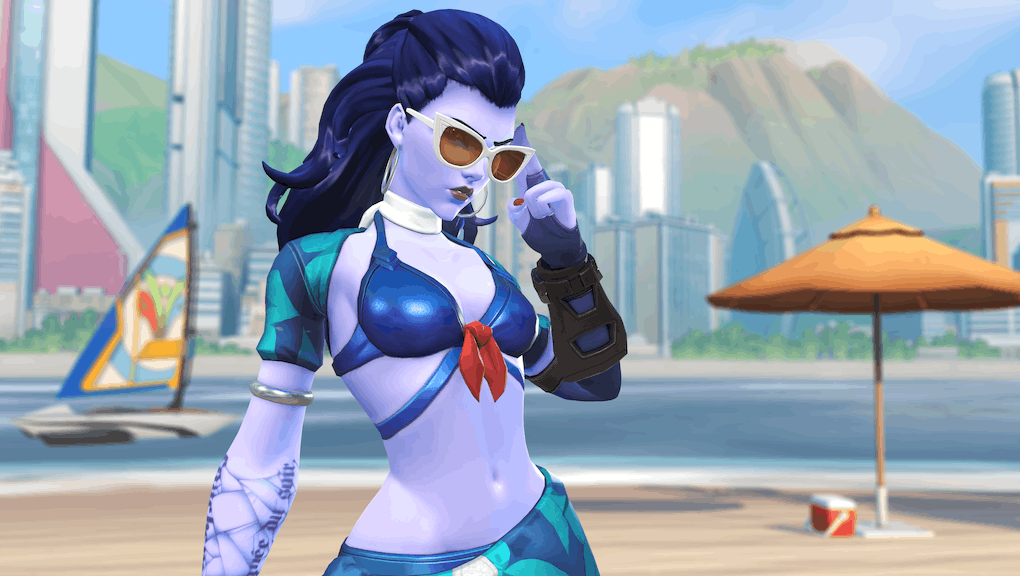 Whenever a new Overwatch seasonal event drops, the most exciting, divisive items that Blizzard releases are new skins. Whether your favorite Overwatch characters got a new skin or not, you almost certainly have some very strong opinions. Well, so do we.

Here at Mic, we like to hash out our feelings for every new Overwatch skin in a roundtable style debate. So join me, writer Rye Khosravi and editor Amanda Farough as we discuss the hits and misses of every new Summer Games skin and give them each a rating out of 10.

Ryan Khosravi: I’m very into this, for no other reason than that it’s so different than his other skins while still remaining on brand.

Amanda Farough: I want to go BMX biking with him on a dirt road somewhere. I feel like he’d show me cool tricks.

TM: Reaper and Soldier: 76 have always been foils for one another, so it’s cool to see this skin in comparison to Soldier’s Evil Knievel-inspired skins. They exist nicely as a set.

RK: Except Soldier’s is ugly and I’ll block anyone who uses it.

AF: I mean, I’d heavily shame someone, but block? Wow.

TM: But this skin literally says “EDGE” on his leg, which seems like Blizzard leaning into the fandom’s characterization of Reaper as a Hot Topic credit card-owning “edge lord.”

RK: Tim likes living on the edge. Get it?

TM: What about fun water-time Sombra?

AF: She’s absolutely adorable. I love that she shows a little skin — because it’s way too damn hot to be totally covered up — but the skin isn’t about sex appeal. It’s about her general badassery.

RK: I think it’s great. Something I really want them to start doing is releasing themed skins for the same character — like, League of Legends did that set of all “magical girl” skins.

AF: Oh, that’d be interesting. I wouldn’t say no to Mercy as a mermaid, to be honest. At any rate, I like Sombra’s skin. She’s cute.

TM: I also really like the clear, sci-fi waistcoat thing. My favorite sci-fi trope is transparent clothing. It’s so silly. It’s very Zenon: Girl of the 21st Century. Also, did you see the cartoon someone made on Tumblr of Sombra hanging out with Widowmaker at Château Guillard? It brings me great joy.

AF: This delights me.

TM: All right, now for Junkrat, which for me is the dud of the bunch.

AF: All I can think about is mermaid Mercy right now. I really, really dislike this skin.

TM: The idea is fun but it’s just not cute? For me, the benchmark is that it has to be better than his “Toasted” skin, and that just has not happened so far.

RK: Do you think we’d like it more if cricket was popular in our country?

AF: It’s not about the sport for me. The problem is that it’s ugly.

TM: It’s unfortunate because all the little details are there. His bombs are little cricket balls and he has a bunch of new voice lines, but it’s just kind of ugly.

RK: This is the only time I’ll defend Junkrat, but I actually like it.

TM: Maybe we can reconvene over the Widowmaker skin.

AF: This is my aesthetic. Widow is retro glam and gorgeous.

TM: This for me is on par with the retro, pin-up D.Va skin from the Overwatch Anniversary event.

RK: This is wonderful, but isn’t she wearing cork wedges?

AF: Why are cork wedges bad? They came back in fashion two summers ago.

RK: I’m from California and there’s a reason I moved. And it’s called cork wedges.

AF: OK, point noted. Please excuse me while I move my cork wedges to the back of my closet.

TM: My favorite thing is that her sunglasses are the equivalent of her visor, so they slide down over her eyes when she uses her ultimate. It’s so slick.

AF: That’s incredible. I love that attention to detail.

TM: This one is a 10/10 for me. She really embodies her femme fatale aesthetic here. I can just picture her sipping a martini on the terrace while her butler drags the body of her dead husband away on a wheelbarrow. I like.

AF: This is absolutely a 10/10 for me, too. Her elegance and coyness shine through, even just through the way the sunglasses are handled. I’m so pleased that she’s sexy without being a tart. She is not “fan service” and that’s what I like the most.

TM: Total toot for me.

RK: Although, I feel like they waited on this joke for too long. Because this joke about Soldier being a lame dad has been in the fandom for basically a year.

TM: True. It’s almost too cutesy, like the “cool mom” from Mean Girls trying to get in on the joke.

AF: Like, we’ve been talking about this meme for a year and now that we have evidence that Blizzard is listening, I want to give them a thumbs up, but this is way too on-the-nose for me, you know?

TM: But in a way, isn’t it even more on brand for Blizzard to come to this joke so late? It’s kind of meta. It’s the thing an uncool dad would do — come to a meme months after the fact and throw themselves into it with everything they’ve got.

AF: That is the epitome of a dad joke. Score time.

AF: Soldier dad will always have a place in my heart. 7 out of 10, because those socks are inexcusable, no matter what the meme dictates.

TM: OK, now onto the skin that’s most important to me as a filthy Mercy main: Nike Mercy with a lit torch as her staff, y’all. (Imagine clap emojis between each word there.)

AF: She is glorious. And what’s wrong with maining Mercy? I think we all need a Mercy main in our lives.

RK: Yeah, this one is my favorite.

TM: It’s interesting how out of place it is in relation to the others, though. This one actually leaked early and some fans were thinking it would all be classic Greek themed. But everyone else is ready for the beach and Mercy’s going to a temple.

AF: Mercy is lighting the way to our hearts, really. But, yeah, I agree that she’s out of place among the others. The others are either going to the beach or going to play a sport of some kind. Mercy as Nike is far more serious.

TM: But, in a way it’s kind of fitting that the game’s resident mom is presiding over the Summer Games, carrying the equivalent of the Olympic torch. Oh my God, wait, have you guys seen the shoes? It’s the world’s worst case of cliffhanger toes.

AF: No, do you have a picture? Please tell me they’re beautiful sandals and not boots or something.

RK: Oh. Weird. How fun. Maybe the idea is that she’s flying the whole time?

TM: What happened there? Did her shoe maker get stabbed to death halfway through crafting these and she was just like, “I’m going to make it work.” Anyway, I love this skin. 10 out of 10.

RK: Speaking of things that push me over the edge.

TM: I think it’s a water bottle, fanny pack situation. Soldier has beer, but McCree is “SAMF,” which stands for “safe as a motherfucker,” according to a lot of fans. Beer gives you swimming cramps.

AF: Gotcha. It really does. And McCree has his shirt off for a reason, right?

TM: Who swims with a shirt?

TM: He needs to be hydrodynamic, like a dolphin.

RK: He’s a lifeguard, so, gotta have that speed.

TM: But, truly, I appreciate the way Blizzard played with McCree’s silhouette and replaced his poncho with a towel slung around his shoulders. It’s really smart. This is an 8 out of 10 for me. It’s great and fun, but from a design standpoint there isn’s really anything mind-blowing.

AF: It’s an 8 out of 10 for me, too. He’s a handsome man, that McCree, but he isn’t breaking any boundaries with his fashion choices.

For more on Overwatch, check out the rest of what Mic has to offer. Here is an article about why popular Overwatch streamers are jumping ship to PlayerUnknown’s Battlegrouns, a story from the Overwatch voice cast about recording their character’s death sounds, a deep dive into the fandom’s theories on what the heck “SAMF” stands for, and a look at one fan’s gorgeous, minimalist animations based on each Overwatch character.