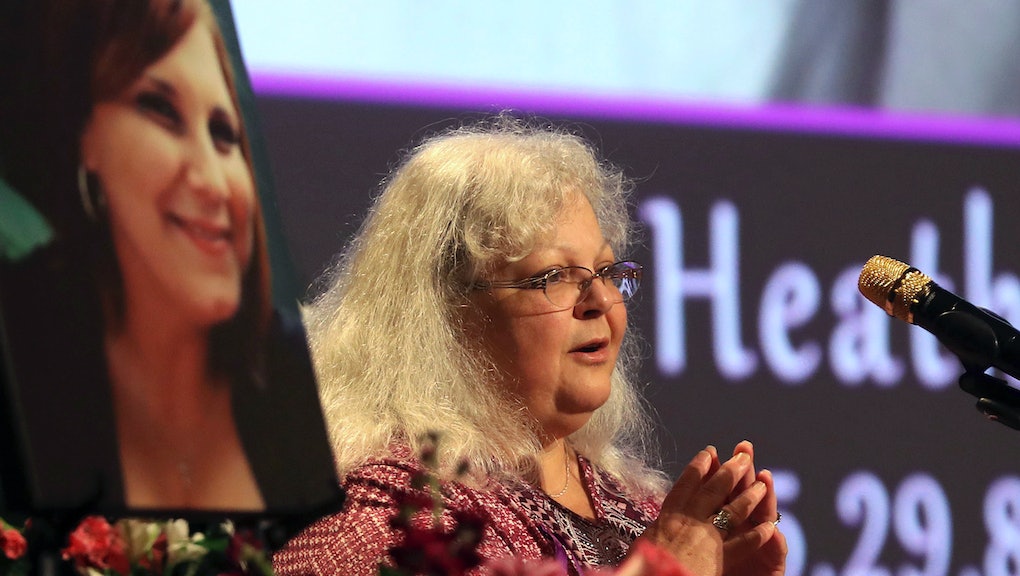 Susan Bro, the mother of Charlottesville victim Heather Heyer, honored her daughter with a powerful speech at Heyer’s funeral Wednesday, delivering a call to action in the wake of the 32-year-old’s tragic death.

“They tried to kill my child to shut her up,” Bro said during the speech. “Well, guess what? You just magnified her.”

Heyer was killed on Saturday in the wake of the “Unite the Right” rally in Charlottesville, Virginia, as members of the “alt-right” and white supremacist groups gathered to protest the removal of a Confederate statue. Suspect James Alex Fields Jr. allegedly drove his car into a crowd of anti-racist counterprotesters who had assembled to oppose the rally, killing Heyer and injuring several others.

Hundreds of mourners gathered at the public memorial service on Wednesday, which was held in Charlottesville, Virginia, at the Paramount Theater. In addition to Bro, the service included speeches by Heyer’s family members, colleagues and friends, who shared stories about the Charlottesville paralegal.

“They tried to kill my child to shut her up. Well, guess what? You just magnified her.”

While Bro paid tribute to her daughter’s life and personality, remembering nightly Facebook messages and her talkative personality, Bro’s speech emphasized what can be taken from her daughter’s death, as she implored Americans to fight for their beliefs and hold difficult dialogues in response to the injustices they see in the world.

“Remember in your heart: If you’re not outraged, you’re not paying attention,” Bro said. “And I want you to pay attention, find what’s wrong, don’t ignore it, don’t look the other way. You make a point to look at it and say to yourself, ‘What can I do to make a difference?’ And that’s how you’re going to make my child’s death worthwhile.”

“I’d rather have my child, but, by golly, if I got to give her up, we’re gonna make it count,” Bro concluded.

My child’s famous Facebook post was, “If you’re not outraged, you’re not paying attention.” She paid attention. She made a lot of us pay attention. Oh my gosh, dinner with her we knew was going to be an ordeal of listening. And conversation, and perhaps disagreement. But it was gonna happen.

And so my husband would say, “OK, I’m going to go out in the car and play my video game for a while.” And so we’d sit and we’d grill. And she and I would talk. And I would listen. And we would negotiate. And I would listen. And we would talk about all the stuff. We talked about politics, we talked about anything that caught her eye that she felt was fair, unfair. She’d talk about her feelings about the office and how things were going. I mean, she just talked. The girl loved to talk. And she was single, so there was nobody listening at home, so Mama got a lot of it. And that was wonderful.

You never think you’re gonna bury your child, you never think to take those pictures. They asked me for pictures for this, and I struggled. I had pictures from her childhood, but I had to go to Facebook to find pictures of my child, because we were always together. I saw her a couple of times a month at least and we would text each other fairly often, and we would Facebook message at bedtime, “I love you. You doing OK?” “Yep, I love you.”

So I have no regrets on that part. Take pictures of the ones that you love because you don’t know when they’re not going to be there.

But here’s what I want to say to you today: This could be a storm in a teacup and it could all be for nothing. I could have said, “Let’s not do this publicly, let’s have a small, private funeral.” But you know, that’s not who Heather was.

Anybody who knew Heather said, “Yep, this is the way she had to go. Big and large.” Had to have the world involved, because that’s my child. She’s just that way. Always has been, and will continue to be.

Because here’s the message: Although Heather was a caring and compassionate person, so are a lot of you. A lot of you go that extra mile. And I think that’s the reason that what happened to Heather has struck a chord. Because we know that what she did is achievable. We don’t all have to die, we don’t all have to sacrifice our lives.

They tried to kill my child to shut her up. Well guess what? You just magnified her.

And you might want to turn away — “I don’t really want to get involved with that. I don’t want to speak up. They’ll be annoyed with me. My boss might think less of me.” — I don’t care. You poke that finger at yourself, like Heather would have done, and you make it happen. You take that extra step. You find a way to make a difference in the world.

My child had a high school education; my child was no saint. She was hard to raise, because everything was a negotiation — not kidding — but you know what? She was a firm believer in whatever she believed. And let’s do that. Let’s find that spark of conviction, let’s find in ourselves that action. Let’s spread this. Let’s have the uncomfortable dialogue.

Right now, down the road, there’s a blood drive going on in Heather’s name. Right now, there are people who are here willing to listen to one another and talk to one another. Last night in New England, they had a peaceful rally in Heather’s name to have some difficult dialogues. If you ever want to see what one of those dialogues looked like, look at her Facebook posts. I’m telling you, they were rough sometimes, but they were dialogues, and the conversations have to happen. That’s the only way we’re gonna carry Heather’s spark through.

So remember in your heart: If you’re not outraged, you’re not paying attention. And I want you to pay attention, find what’s wrong, don’t ignore it, don’t look the other way. You make a point to look at it and say to yourself, “What can I do to make a difference?”, and that’s how you’re going to make my child’s death worthwhile.

I’d rather have my child, but, by golly, if I got to give her up, we’re gonna make it count.”