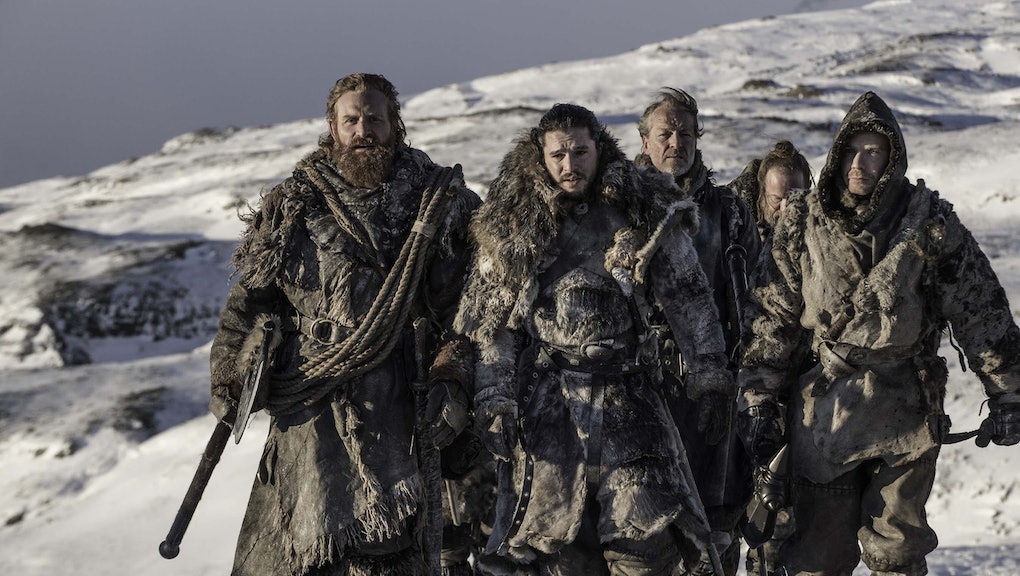 ‘Game of Thrones’: Let’s overanalyze these photos from Sunday’s episode, “Beyond the Wall”

Jon Snow and a band of misfit warriors are heading north of the Wall to capture one of the Night King’s wights and present it to Cersei Lannister at King’s Landing as proof the ultimate evil exists.

So yes, it’s not the best plan a character has had on Game of Thrones, but I’m willing to ignore the logical fallacies of said plan if it means we get another epic showdown with the White Walkers.

The penultimate episode of the season, “Beyond the Wall,” figures to be a good one, and if you’re impatiently waiting for Sunday — and don’t want to watch the leaked episode online — HBO has blessed us with 12 tantalizing photos. We get a few shots of Jon and Co. north of the Wall as well as Sansa and Arya Stark, who may suddenly be at each other’s throats thanks to Littlefinger’s Machiavellian tactics.

Let’s go through these 12 photos and see what we can take away ahead of Sunday.

Sansa’s reading a letter here, accompanied by Brienne of Tarth. It’s possible she’s getting word of Jon leaving Dragonstone and heading to Eastwatch-by-the-Sea, which may explain her rather somber demeanor. It’s also possible she’s reading something else entirely — I can’t read minds!

Jon and Beric Dondarrion have a fun thing in common

Jon and Beric didn’t share any screentime prior to the previous episode, but they have so many potential icebreakers they can use to get to know each other. Like how R’hllor, aka the Lord of Light, has brought them both back from the dead — in Beric’s case, many, many times. George R.R. Martin even referred to Beric (and perhaps Jon) as a “wight animated by fire.”

They could also discuss how Beric and the Brotherhood Without Banners sort of kept Arya captive because they wanted to sell her back to the Starks for gold. Really, they should become fast friends.

Last episode, Littlefinger sowed the seeds for Arya to suspect her sister of colluding with the Lannisters against their mother and brother. Robb and Catelyn knew the letter Sansa wrote back in season one was essentially coming from Cersei Lannister’s mouth, but without that context — and after spending several seasons apart — Arya’s wary of her sister’s actions.

We can only hope it doesn’t tear apart the Starks, just as soon as they (finally!) reunited. Let’s not make Bran, I-just-did-a-semester-abroad-and-all-I-did-was-drink-kombucha Stark, the most likable of the Winterfell bunch.

Tyrion Lannister and Daenerys Targaryen have some wine

Is Tyrion still a loyal follower of Dany? I wouldn’t forgive him for beginning to doubt whether the Khaleesi is fit to rule Westeros after she sentenced Randyll and Dickon Tarly to death and ordered Drogon to roast them alive. We can agree to disagree on whether Dany was justified in their public executions, but when your father was known as the “Mad King” — and his trademark move was burning people alive — it’s a bad PR move.

Perhaps a conversation (and more importantly, some wine!) can ease the tension between the would-be queen and her trusted hand.

This is my favorite photo of all time

When the second Thrones trailer dropped for season seven, the shot of Beric and his flaming sword(!!) was an instant sensation. Thrones has some undeniably badass imagery between the Night King, who belongs on some death-metal album art, and Dany’s dragons, who would also make fine death-metal album art.

But this image of Deric, presumably getting ready to fight the White Walkers with a flaming sword? This has to be my favorite photo of all time. God, I can’t wait for Sunday.

I’d make that face, too, once I realized heading straight toward the White Walkers to capture a wight and drag it across the icy tundra while trying to escape the undead’s grasp was a terrible, terrible idea.

Not gonna lie, this looks pretty bad. That’s about as much as I can overanalyze this.

Dany’s got a white gown. Is she heading north?

OK, here’s some unnecessary overanalyzing: Dany’s wearing a white dress in this photo. She’s worn a darker garment — with a pattern resembling the scales of a dragon — so far in season seven, so the wardrobe change is a curious choice. The fact that it’s white and resembling snowfall might indicate Dany’s going to head north and, perhaps, help Jon on his reckless mission to capture a damn wight.

Now, Tyrion’s either there to escort her to her Drogon Uber or — *deep breath* — fulfill his prophecy of being a dragon rider. Yeah, it’s probably the former.

This is my new desktop background

Some of them (except for Jon) are probably doomed to die on Sunday, but at least they could all band together for this glorious shot of the Westeros A-team trekking further north.

And finally, some team portraits

“Beyond the Wall” airs Sunday at 9 p.m. Eastern time on HBO. Check out the full teaser below: