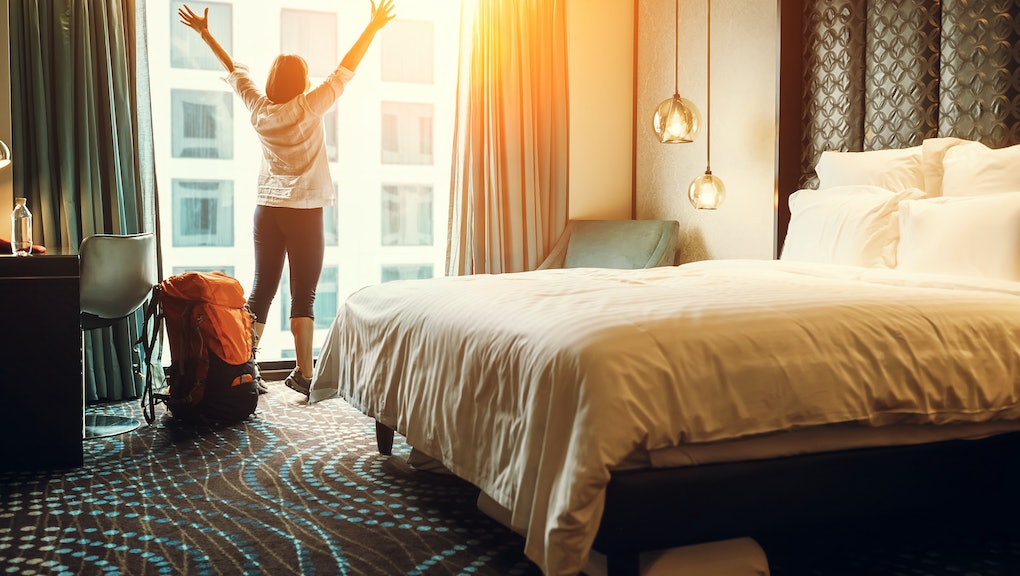 This is the final part of a three-part series that looks at green hotels — what that means, how it works and what consumers can do.

In real life, you probably don’t launder your sheets every day, recklessly tear through individually wrapped snacks and toiletries, single-handedly consume a 12-pack of bottled water or let the shower run for 30 minutes.

But forgoing real life in favor of indulgence and escapism is often considered acceptable — or even expected — on vacation. This goes far beyond not replacing your towels and linens every day, which has become largely ubiquitous. “At home, we don’t all wash our sheets every day,” Ave Bradley, Kimpton Hotel and Restaurant Group’s creative director and global senior vice president of design, said by phone. “So when you think about it, if people are staying with us for 2 1/2 nights on average, obviously there’s no reason to change the linens.” Today’s hotels are finding creative new ways to softly coax guests into becoming greener by being much more explicit about their forward-thinking policies.

They’re giving you real incentives to pass on housekeeping

During a recent stay at the Kimpton RiverPlace in Portland, Oregon, resting on my nightstand was a little pamphlet that read: “Enjoy a $5 dining credit when you pass on housekeeping services.” (I’m an admitted sucker for hotel pampering — and somewhat sheepish about the prospect of an unmade bed and overflowing trash can — so did not take them up on it.)

The brand has also added easy features, like robe hooks. “We were asking people to preserve their towels, but they had no place to put them,” Bradley said. “One decision at a time, we get to the place where we’re able to do the right thing more easily and more intuitively, rather than asking people to go an extra mile in order to do the right thing.” Starwood’s Make a Green Choice program gives guests Starpoints or dining credits in exchange for opting out of housekeeping. (The company may retool its sustainability programs in the wake of 2016’s acquisition by Marriott International, according to a spokesperson.)

Other tactics are meant to catch your attention, like cheeky, trivia-based cards that highlight the number of towels in Yellowstone National Park. The signage was rolled out across its hotels two years ago as part of a comprehensive opt-out program.

“First of all, you’re on vacation — the last thing you want to do is be guilted into changing your behavior,” Catherine Greener — vice president of sustainability for Xanterra Parks and Resorts, which operates the hotels on Yellowstone — said in a phone interview. “We try to use a sense of place and engagement around in-room messaging. Make it memorable, make it interesting.”

In Xanterra’s pilot program at Old Faithful Snow Lodge over the winter, 19.2% of guests opted out of housekeeping entirely. “We gave them a little green hang tag to put on their door that says they’re choosing a softer footprint,” Dylan Hoffman, Xanterra’s director of sustainability, said. “And we took a look at our electricity use and the water that we used, and broke it out on a room-by-room basis. If housekeeping isn’t turning on the lights — if they’re not replenishing towels or linens, if they’re not using any cleaning products — there’s very much quantifiable data of the positive environmental impact.” The findings? Per Xanterra, assuming an eventual 30% participation rate at all hotels and lodges across Yellowstone, the program would yield savings of 300,000 gallons of water a year (the equivalent of 1,863 kiddie pools),150,000 kilowatt hours of electricity a year (15.6 homes’ electricity use for one year) and 10,000 gallons of propane a year (2,128 backyard barbecue tanks).

“As the hotel operator, we have a little bit of an obligation to change that dynamic,” Hoffman said. “We will of course change your sheets — we’ll do whatever you want, we’re a hospitality company. But let’s be real here: It makes more sense to have a more standard, traditional stay than all this pampering.”

They’re encouraging you to turn off the faucet

Many hotels across the country — including the Park Hyatt Aviara Resort, Golf Club and Spa in Carlsbad, California; the LEED Silver Andaz Maui at Wailea Resort; and properties across Westin’s portfolio — have systems like low-flow plumbing or limiters to save water. Kimpton is in the process of auditing water consumption at all of its hotels, with a goal of reducing water flow for faucets and showers to 1.25 gallons per minute and 2 GPM, respectively, according to Nick Gregory, Kimpton’s senior vice president of hotel operations.

While these initiatives tend to happen out of sight, sometimes guests are asked to participate. Consider the reclaimed-wood, five-minute hourglasses in the showers at 1 Hotel Brooklyn Bridge — a subtle, on-brand reminder to speed up your sudsing. “The feedback has been, ‘I never realized how long five minutes actually is,’” said Waad El Hadidy, design director at Starwood Capital Group, the investment firm behind the property, which opened in February and she said is expecting its LEED Gold plaque in the fall. “It’s not preachy — it doesn’t hit you over the head or guilt-trip you into doing anything. It doesn’t shut off the water on you after five minutes. It’s a very simple gesture that invites the guest to engage, but at their own pace and at their own choice.”

And at the Charles Hotel in Cambridge, Massachusetts, taking a bath — an act that consumes more water than showers, according to the U.S. Environmental Protection Agency — is out of the question entirely: In 2016, as part of a $20 million renovation, the 295-room property removed bathtubs from guest rooms in an effort to increase its overall water savings.

They’re giving you no choice but to recycle

In New York City, where I live, my condo building is required by law to provide separate bins for recyclables and for trash, and I’m required to sort my household rubbage. Why should I be off the hook just because I step foot into a hotel?

In a survey of more than 8,000 member and nonmember hotels in 2016, the American Hotel and Lodging Association found that recycling programs have risen from 32% in 2004 to 63%. Although those stats look at a hotel’s operation as a commercial business, the trend toward in-room recycling bins, in order to involve guests, is just beginning to gain speed. To that end, Xanterra, Kimpton and 1 Hotels have all outfitted guest rooms with recycling bins, as have individual properties, like the new Hotel Henry in Buffalo, New York. 1 Hotel Brooklyn Bridge also has recycling bins by the elevator banks on every floor.

Composting, meanwhile, usually happens behind the scenes at particularly green properties, like the Andaz Maui, where a hydrator turns food waste into compost used to fertilize the property’s gardens and grounds, or Kingsmill Resort, in Virginia, where a composting program diverts over 80 tons of food waste from the landfill a year, according to the property.

Xanterra is taking this idea a step further with in-room compost-collection bins at Canyon Lodge and Cabins, a newly rehabbed LEED property on Yellowstone. The triple-bin system of trash, recycling and composting is the first of its kind for the operator and is fairly new for the industry. “We have a compost operation, and we collect all the compostable material in the back of the house,” Hoffman said. “That’s great — we’re saving a lot of waste from going in the landfill.” But this isn’t a side that most hotel guests get to see. The in-room compost-collection bins, Hoffman said, are “a pretty neat opportunity for guests to learn a little bit more about what goes on in the park.”

At 1 Hotel Brooklyn Bridge, guest room entryways are outfitted with a triple-filtered-water refill station, complete with a carafe made from recycled wine bottles. It’s an implicit nod that no, those complimentary bottles of Dasani aren’t part of the welcome fanfare here. “This is kind of a moment that makes you stop and think a little bit,” El Hadidy said. The Blake at Taos Ski Valley, in New Mexico, also has refill stations, plus free refillable water pouches.

Straws, cups and other plastics are on the outs, too

Edition, Ian Schrager’s Marriott brand, has removed plastic from its food and beverage operations — straws, cups, utensils — and replaced it with plant-based, compostable plastic alternatives, not that you’d necessarily know it while sipping a cocktail at Tropicale, the poolside bar at the Miami Beach Edition.

“If a hotel is making a move toward plastic alternatives and they want to shout about it, then great — better that it’s happening than not happening,” Ben Pundole, Edition’s vice president of brand experience, said in a phone interview. “But it’s something that should be the norm.” Andaz Maui has a similar initiative: Its outdoor food-and-beverage outlets are stocked with reusable bamboo cutlery and bioplastic straws, and its to-go packaging includes biodegradable, disposable cutlery made from potato starch.

Then there’s the issue of used toiletries. Some hotels — like the Catahoula Hotel in New Orleans, about 60% of Kimpton properties and Starwood’s Aloft brand — have large, refillable shampoo and conditioner dispensers in lieu of tiny individual bottles. Although guests can theoretically take half-used mini toiletries home instead of leaving them to be thrown out, hotels aren’t necessarily counting on that.

Through a partnership with soap-recycling nonprofit Clean the World, Hilton, for instance, has donated at least 734,700 discarded bottled amenities and more than 5.3 million soap bars (from more than 249,000 hotel rooms) to underserved communities in need of hygiene products. This has saved, according to company estimates, more than 275,500 pounds of plastic and diverted more than 1.36 million pounds of waste from landfills.

The partnership that Kimpton recently kicked off with Clean the World will be mandatory portfolio-wide in 2018; employees will start filling dedicated collection bins with toiletries. “Being green goes beyond the norm of recycling or selecting sustainable products,” Gregory said. “It has to be an essential part of doing business.”