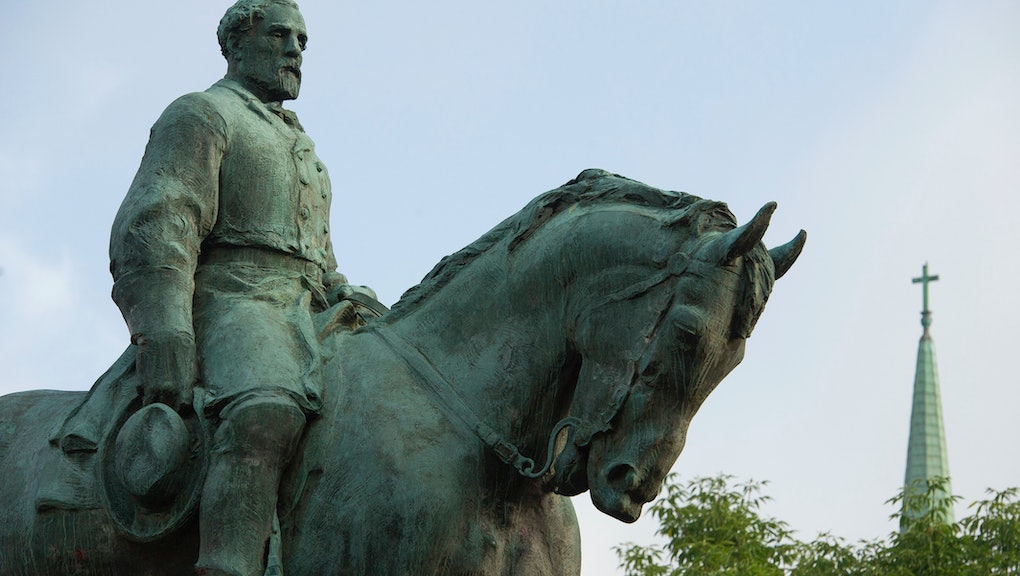 What will happen to those Confederate statues they’re taking down? Here are some options.

Outdoor art is made to be resilient, and not just against pigeons. But in the past week, public commemorative statues have been challenged like never before. Suddenly, Americans realized the U.S. Capitol’s statue collection commemorates more Confederate leaders than women. Baltimore quietly whisked four statues away overnight, leaving bare plinths.

Most dramatically of all, a crowd in Durham, North Carolina, took matters into its own hands and tore down a statue of a Confederate soldier.

Sarah Beetham, an art historian at the Pennsylvania Academy of the Fine Arts who studies Civil War monuments, is one of the many people who’ve watched video of the incident. “I’m as flabbergasted by what’s been happening the past couple of days as anyone,” she said.

Beetham is particularly interested not in statues of famous individuals, but in the so-called common soldier memorials designed to commemorate the thousands of individuals killed in the war. She said there are about 2,500 such memorials honoring the Union side and about 500 memorializing the Confederacy.

When they were first erected, the memorials helped people cope with the death of real people, of sons and brothers and members of the community. Beetham said it wasn’t just the sheer scale of death people found difficult to process in the war’s immediate aftermath, but also the lack of closure. Many battlefield bodies were never identified or returned to family members.

So towns banded together to put together war memorials with plaques of locals who died in cemeteries, often mass-produced. They were more common in the North than the South, where money and technology were scarce.

But the atmosphere was changing by around 1880. Mourners had moved through the worst of their grief, and veterans, over the worst of their trauma, began to feel proud of battlefield accomplishments. Monuments started coming out of cemeteries and into the heart of towns.

“These monuments, they’re absolutely in the center of community life,” Beetham said. Because they’re in public spaces, we pass them running errands or sit by them to eat lunch. “They’re just part of our daily furniture.”

Beetham said these statues have always been challenged, but for a long time only by African-Americans, whose concerns were ignored by the rest of society. But that changes when, say, a statue is vandalized or hit by a car or damaged by the weather. “Suddenly we have to reckon with them,” she added.

According to Beetham, the thinking around Confederate monuments started to shift in the wake of the June 2015 mass shooting inside a church in Charleston, South Carolina, that left nine people dead. More Americans began questioning the messages Confederate monuments send, and more of these statues were vandalized. Beetham said she’s lost track of how many, but claimed there have definitely been dozens of incidents, possibly more, in the past two years. Most of the damage has been reversible, like graffiti.

That’s a far cry from toppling a statue in Durham. “I’ve been sitting here watching that video over and over on loop,” Beetham said. “The way that it crumpled is so fascinating.” When you hear the phrase “topple a statue,” she added, you think it just goes “clunk” and ends up on its side, more or less unharmed — not the way the Durham statue crumpled. “I’ve never seen something happen like that.”

Beetham said she wouldn’t be surprised if there’s a spurt of similar events in which people take matters into their own hands. Instead, she hopes towns will start coming up with plans for how to handle the monuments and thinks historians will also be involved in the process.

She noted the monuments have always been community touchstones, funded by local bake sales. “What I would like to see happen would be for decisions to be made about their removal in the same way that decisions were made about them in the first place,” she said, as a community. “I’m not sure if that’s going to be possible at this point.”

Several cities have already announced plans to relocate statues into museums or simply out of public display. Perhaps soldier monuments could be returned to cemeteries, Beetham noted. The damaged Durham statue, according to a local newspaper, is now in a warehouse.

But what if we decided to do something new with these statues?

There’s plenty of precedent for that, according to Ronald Gonzalez, an artist who works with found objects. He pointed to the aftermath of the Sept. 11 attacks — when artists sought out metal from the wrecked buildings to turn into new sculptures — as an example of how to “make another kind of statement out of it.”

Gonzalez said perhaps something similar could happen to Confederate monuments like the Durham statue. “Obviously people want it to go into the trash heap of history, and maybe that’s where it should go,” he said, but reimagining them could offer a different kind of social healing. “It’s only natural to think of creative ways to deal with these things that are destroyed.”

Sculptor John Lopez has mixed feelings about the idea. On one hand, the idea of incorporating bronze statue fragments into new works of art is right up his artistic alley — on the other, he feels it’s a little disrespectful to the artist behind the original statue.

Logistically, though, it would be fairly straightforward: Pull out a welder and get to work. “Any welder could figure out a way to attach it to something,” Lopez said. But it’s not really so simple. “It takes an artist and a sculptor to figure out how to utilize it in a way that does it justice or helps to tell the story.”

That story can include both the sculpture’s origins and its downfall, he added. “People can really get the perspective and the reasoning behind what the whole thing stood for or why people were so offended by these sculptures and took them down,” Lopez advised.

But we may be running out of time to be making these decisions in a thoughtful, inclusive way, at least according to Beetham. “It seems like things are happening faster than I can even keep up with them,” she said.

The one thing art historian and artists agree on? Simply destroying the sculptures isn’t the answer. “That’s part of the foundation of our country,” Lopez said. “So you don’t want to just melt it down.”