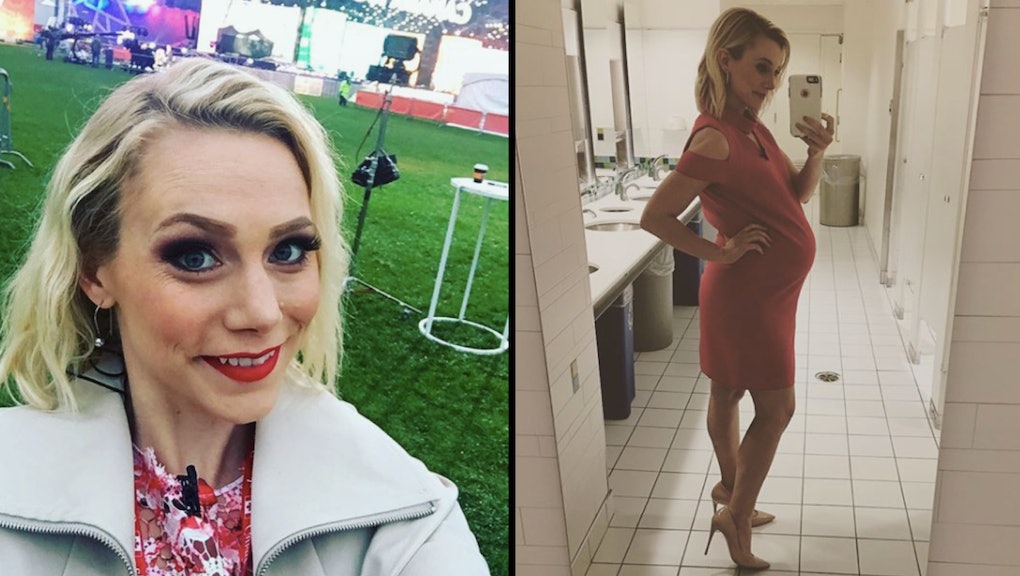 After being shamed for wearing a tight dress, this pregnant meteorologist is speaking out

On Tuesday, Kelsey McEwen — the host and meteorologist at Canadian morning show Your Morning — dared to be pregnant and decided to wear a dress that made her pregnancy apparent.

Unbelievably, her choice of attire was offensive to at least one viewer, who then made sure McEwen knew of their opinion by tweeting at the Your Morning Twitter account. “I can’t believe the skintight maternity attire,” the person wrote. “Disgusting!”

In response, McEwen wrote: “When what a 34-week pregnant woman is wearing is what someone finds disgusting in this world ... time to check your priorities.”

McEwen also spoke out about the tweet on air, noting it was just one example of people feeling like they should pass judgment on a person’s appearance.

“Listen, I’m a firm believer that my body and your body is no one’s business but your own,” McEwen said. “Your body is not for anyone to talk about, whether they’re talking about your pregnant shape or they’re talking about your athleticism or your hair color or your skin color. It is not anyone else’s business but your own. When we dive into these discussions about only complimenting or only criticizing other people, we detract from so much more.”

McEwen’s speech comes as no surprise, since a shocking number of female meteorologists and newscasters have been criticized specifically for their attires.

There was Liberté Chan, who was told to cover up while on air. There was Molly Matott from CNY Central, who upset a viewer over her “underarm fat.” And there was Katie Fehlinger, who was similarly criticized back in 2015 because her clothes showed off her then-baby bump.

The hashtag #MyBodyIsNotYourConcern was born in response to McEwen’s speech — because she’s not just letting slide this viewer’s judgment.

“Feeling proud and strong and empowered by the amazing positive response to #MyBodyIsNotYourConcern!” McEwen wrote on Instagram on Wednesday. “Thank you for reaching out, sharing your stories and sharing the message that we can do better. Your body is YOURS. Your self-worth is determined not by what others think, but [by] what you think of yourself. So set the bar high, stop focusing on others and love the shit out of yourself. It makes for a way better world.”