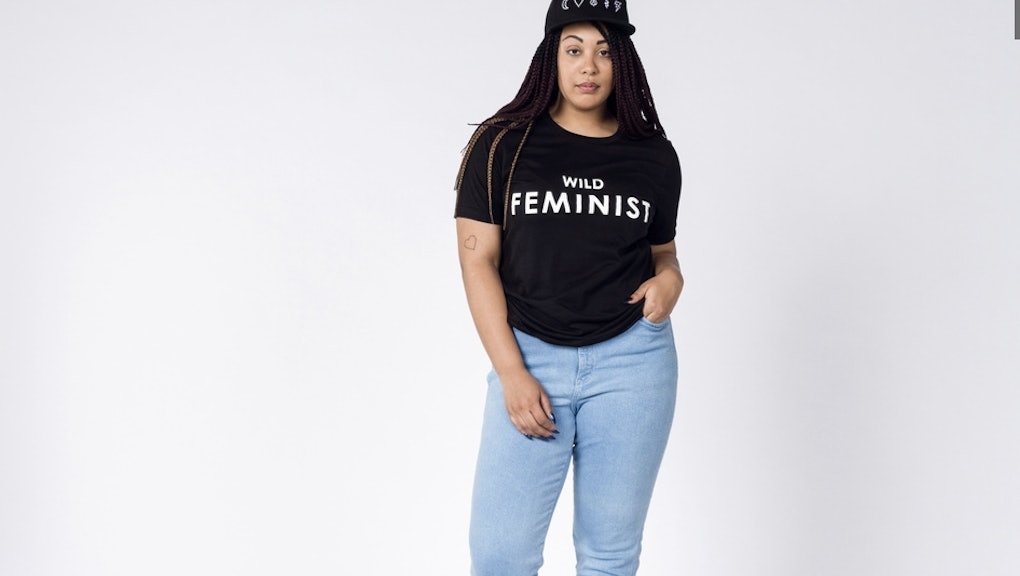 In the past year alone, Forever 21 has been accused of ripping off designs from indie brand Valfré, activewear brand Alala, jewelry brand Sorelle, Gucci and Adidas. Now we can add one more to this ever-expanding list: the queer-owned indie brand Wildfang.

Over the weekend, the CEO of Wildfang, Emma Mcilroy, called out Forever 21 for selling a T-shirt that’s nearly identical to the brand’s highly recognizable “Wild Feminist” tee.

“Hey Forever 21,” Mcilroy wrote. “You SUCK. Please stop ripping us off.” She then ended the post with a hashtag: #TrademarkInfringement.

You can judge for yourself. This is Wildfang’s “Wild Feminist” T-shirt:

And this is Forever 21’s version:

“When you rip off that T-shirt, you’re not just ripping off us; you’re also taking money out of the pocket of Planned Parenthood and the ACLU, because 10% of every product that we make goes directly to them,” Mcilroy told Refinery29. “So, yeah, it’s just shitty.”

According to Julie Zerbo, the founder of the Fashion Law, Wildfang could have a viable case on their hands given it did file a federal trademark application for the words “Wild Feminist” to be used on T-shirts and jackets in November 2016. It’s currently pending before the U.S. Patent and Trademark Office, but it will likely be approved.

“Wildfang could likely make a case for common law trademark infringement and would prevail if it could show that consumers are likely to be confused as to the source of F21’s [T-shirts],” Zerbo wrote in an email. “Were they confused into thinking that F21 has collaborated with Wildfang, for instance, or that Wildfang has authorized F21’s use of the mark or is affiliated in some other way. That would be the crux for the [trademark] infringement claim.”

As of Monday, Forever 21’s “Wild Feminist” T-shirt is no longer for sale.

In an email to Mic, a spokesperson for Forever 21 said: “The shirt in question was bought from a third party source.  As soon as we were alerted to the issue by Wildfang, we respectfully removed it from the website.  Because it did not have any trademark or IP protection, there were no red flags raised at the time of purchase.”

But according to Zerbo, the removal doesn’t mean that all is good and settled between the two brands.

“This does not mean that F21 has agreed to compensate Wildfang for its allegedly infringing use of Wildfang’s trademark,” Zerbo said. “It is great that F21 has pulled the [T-shirt], but that does not take into account/remedy any sales that it has made by using Wildfang’s mark. In order to recover damages, including lost profits, Wildfang would likely have to file a [trademark] infringement suit.”

And according to that interview with Refinery29, Wildfang is looking to do just that, with Mcilroy telling R29, “Forever 21 can expect to hear from us.”