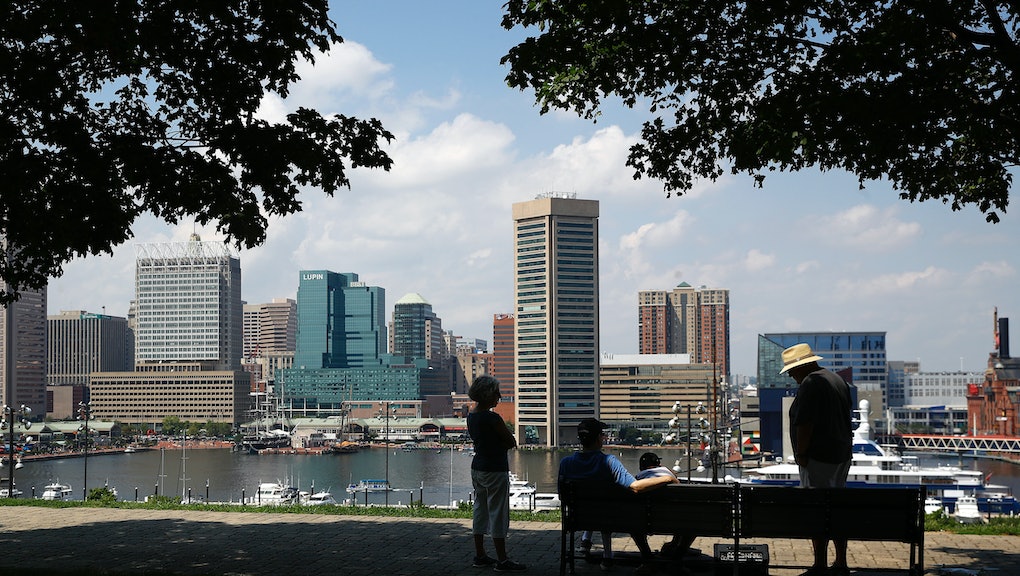 Oldest Christopher Columbus monument in the US vandalized in Baltimore

A Christopher Columbus monument in Baltimore was vandalized overnight on Monday by protesters rallying against “hate-filled monuments,” the Baltimore Brew reported.

Protesters smashed a hole in the monument, rendering its inscription, “Sacred to the Memory of Chris. Columbus Oct. XII MDCC VIIIC,” unreadable, the Brew reported. The destroyed monument was accompanied by signs reading “Racism: Tear it Down” and “The future is racial and economic justice.”

Located across from Baltimore’s Herring Run Park at the corner of Harford Road and Walther Avenue, the 44-foot tall obelisk is one of three Columbus monuments in Baltimore, with two others located in Druid Hill Park and the city’s Little Italy neighborhood.

The now-destroyed monument is the oldest Columbus monument in the city — and North America. It was first erected in 1792 to commemorate the 300th anniversary of Columbus’s arrival in North America, the Baltimore Sun reported.

The monument’s destruction was captured on a video uploaded to the YouTube channel “Popular Resistance” on Monday, in which the protesters are seen smashing the monument with a sledgehammer as a voiceover narration explains the rationality behind the act of protest.

“Christopher Columbus symbolizes the initial invasion of European capitalism into the Western Hemisphere,” the video’s narrator says. “Columbus initiated a centuries-old wave of terrorism, murder, genocide, rape, slavery, ecological degradation and capitalist exploitation of labor in the Americas. That Columbian wave of destruction continues on the backs of Indigenous, African-American and brown people.

“Racist monuments to slave owners and murderers have always bothered me. Baltimore’s poverty is concentrated in African-American households, and these statues are just an extra slap in the face. ... What kind of a culture goes to such lengths to build such hate-filled monuments? What kind of a culture clings to those monuments in 2017? Part of our evolution as humans requires tearing down monuments to destructive forces and tearing down systems that maintain them.”

The Baltimore Police Department held a press conference in response to the vandalism on Monday afternoon, in which they said they were investigating the incident and had not yet identified a suspect.

“[Destroying monuments is] dangerous, it’s also unnecessary and it’s something that has a process, and the process was observed last week here in Baltimore,” Baltimore Police Department media relations chief T.J. Smith said during the press conference.

“At the end of the day, we’ve got to ask people to exercise judgement with this. … Ultimately, intentional damage and destruction to property is not the appropriate way to go about this. We’re trying to be as progressive as we can as a city, certainly, by having the conversation and seeing what we can do with this, but what occurred with this monument, again, is something that’s against the law. It is illegal, and it’s something that the person could face consequences for,” Smith added.

The monument’s destruction comes amid a wave of movements to tear down Confederate monuments in the wake of the “Unite the Right” rally and deadly car attack in Charlottesville, Virginia. The city of Baltimore made the decision to remove their own Confederate monuments overnight a few days after the Charlottesville events, along with a statue of slavery defender and U.S. Supreme Court Chief Justice Roger B. Taney.

The targeting of racist monuments has now extended to depictions of Columbus, who has long been criticized for his treatment of indigenous peoples upon arriving and claiming to have “discovered” North America.

“Everything else we talk about stems from that one particular man,” Stacey Little, a rally organizer advocating to remove a Columbus monument in Ohio, told WOSU. “How do we start the conversation? Let’s start at the beginning. We can’t skip and jump and hop because we want to and we feel like it’s convenient. Let’s start at where it originated and go from there, and he’s the originator.”