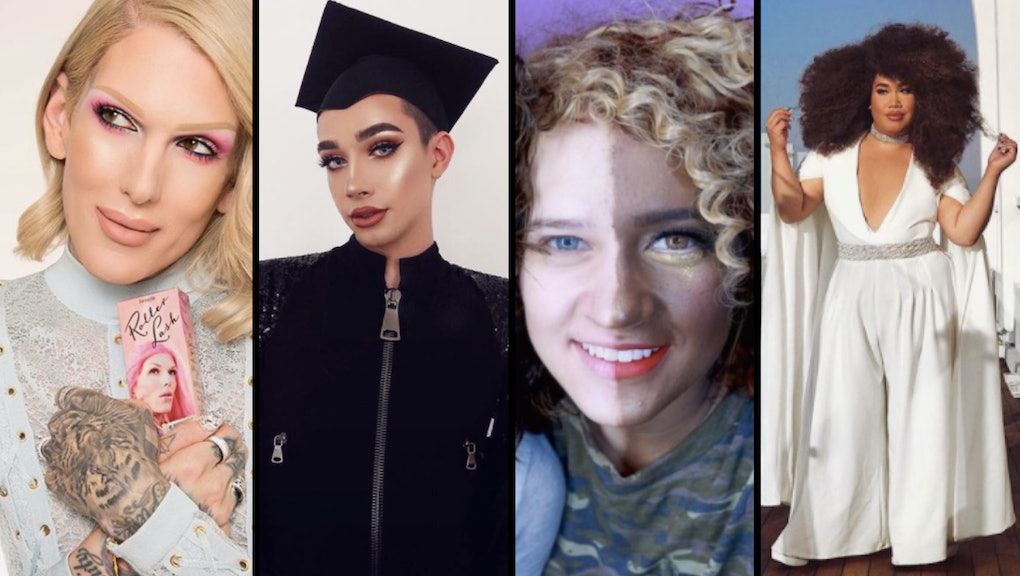 Why are so many beauty vloggers so problematic?

Being a beauty vlogger isn’t easy. You’ve got to track down those makeup products. You’ve got to film and upload those videos. You’ve got to attend to your thousands of followers on Instagram and YouTube. Then, if you do something problematic, whether that be make an off-color statement or upload a questionable tutorial, you’ve got to find the time to apologize swiftly and earnestly. That’s become a standard practice for plenty of makeup vloggers, who seem to constantly be caught making offensive statements or creating tasteless tutorials, and therefore cause mayhem in the beauty vlogger world.

Why is this so common? Well, probably the very structure of the internet is why. We look to these people, relative strangers, for guidance on things like not only just beauty, but love and relationships, confidence and even humor. It’s peculiar, but after hours of watching their videos and scrolling through their videos, maybe we naturally assume they think like us. But then, because of every single person’s ability to find proof of bad behavior and distribute it now on the internet for everyone to see, something problematic can easily be unearthed and distributed, and these figures rightly come toppling down off their pedestal.

To show how easily this can be done, let’s run through a few examples of this within the beauty vlogger world, starting with the one and only Jeffree Star, who has 5 million followers on Instagram alone.

After years as an entertainer and beauty vlogger, Star’s previous racist and sexist statements came to light in 2016, when two of his fellow vloggers — Kat Von D and Stephanie Nicole — took to social media to expose him. Nicole posted a video talking about Star’s previous statements, complete with screenshots, while Von D’s takedown was helped along by her fans, who found footage of Star’s comments from years ago.

The comments included things like: “I win by having diamond rims, and you win by being a poor Mexican” and “She’s a fat, ugly bitch, you stupid c*nt!” He was also seen saying the N-word multiple times.

While Star tried to quell the flames from that controversy, by 2017, he was back to calling black makeup YouTuber Jackie Aina a “rat.” So as those videos of him making racist and sexist statements came back to light, he finally formally apologized in a 15-minute video.

Now that’s just one instance of a beauty vlogger getting slammed for racist and sexist and unacceptable behavior. There are plenty more.

In 2016, James Charles made history as the world’s first-ever CoverBoy. Months later, he made a racist statement on Twitter. “‘I can’t believe we’re going to Africa today. Omg what if we get Ebola[?},’” Charles wrote, perhaps quoting a conversation he’d had. “‘James we’re fine. We could’ve gotten it at Chipotle last year.”

In short, he “fucked up.” But then he also called Africa a country, when it is in fact not. That was enough for many of his fans to understandably not support him ever again.

Racist statements were at the center of yet another makeup vlogger controversy in just July, too, when Chanel Brusco, a Swiss beauty blogger known as Cocomadkilla, used a review of a Korean beauty product to call Asians “ching chongs.”

“As you may have noticed, you discover a lot of funny stuff in the East,” Brusco wrote in a post that’s since been deleted on a website that’s now been deleted. “Many of us don’t always understand the ‘ching chongs’ with the black hair and funny clothes (hihi). But what makes us all the same is our love for sleep and beautiful skin.”

It didn’t go over well. The article was screenshot and sent all around the web, where people voiced their outrage.

In an apology statement on Instagram, Brusco wrote: “I would like to state that I never meant to offend anyone. I’m sorry if that was the case. I am of Italian descent and continuously make jokes about myself, too. Those who know me know that my humor comes with an edge, but I am certainly not a racist. I have many friends of different origin[s] and culture[s] and appreciate these people very much.”

Other than clearly racist statements, vloggers have caused controversy and outrage because of some misguided tutorials as well.

In June, YouTuber Chloe Morello, who has more than 940,000 followers on Instagram and 2.2 million YouTube subscribers, posted a makeup tutorial for Eid al-Fitr, the Islamic holiday that marks the end of the month-long fast of Ramadan, complete with a hijab. “Just so you can see what the look will look like with a hijab on,” she said in the video. “I don’t want to offend anyone when I do this.”

But she did offend people. In the comment section below her video, one person wrote, “It’s lovely of you to do a makeup look for Eid, as clearly your demographic includes Muslim women who love your looks. However, wearing a hijab for the purpose of the video is wrong.” Another: “For you it’s easy to wear it like a costume, for the purpose of a tutorial, while actual Muslim women wear it with the risk of being harassed or being attacked due to the fact Islamophobia is still so high in society.”

Then in July, Vika Shapel, who has nearly 8,000 followers on Instagram, posted about a “Chocolate challenge,” which had her and her white friend layering chocolate onto their faces to make their skin a darker color. You know, like blackface.

“[I don’t know] if there is a challenge like this, but we haven’t seen it so I’m calling it the ‘chocolate challenge,’” she wrote in an Instagram post that was soon deleted. “Come watch us transform into deep-chocolate skin tones from our pasty pale.” People weren’t stoked.

While Shapel never posted an apology herself, she did take the time to talk to some press about the incident. Telling Yahoo Beauty, “I simply wanted to see how I looked in a deeper skin tone. I wasn’t aware of the whole blackface concept before people began commenting it on the photo. I would like to apologize to people that were hurt or offended by my post, and it won’t happen again.”

Now just days ago, in early August, Patrick Starrr posted a picture of his transformation into Solange on her wedding day, complete with that white pantsuit, some bling and, yeah, her afro.

Compared to Starrr’s racist statements and blackface makeup tutorials, these posts by Starrr might seem minor, but to his followers, which number 3.5 million on Instagram, it wasn’t. And they claimed that Starrr was culturally appropriating and trying to mimic a black woman when he is in fact Filipino.

As is the usual course of action for beauty vloggers, Starrr had to apologize, writing on Twitter, “I want to apologize for offending anyone with my hairstyle last night. I wanted to celebrate a beautiful hairstyle inspired by Solange.”

“I am not in any way claiming to be black,” he continued. “I am Filipino and accepting, and I hope we can all celebrate beauty/diversity all together.”

It really is like every few weeks, another makeup vlogger missteps and is immediately revealed to be problematic. Sometimes their careers end with it, but others, like James Charles, who is still working with CoverGirl, appear to recover well.

The question we should maybe start thinking about now is this: How do we stop giving our time to people who are racist or bigoted? And maybe the answer is in the internet taking a bit more time to research before it grabs onto a vlogger and pushes them into the spotlight and adoring fame.