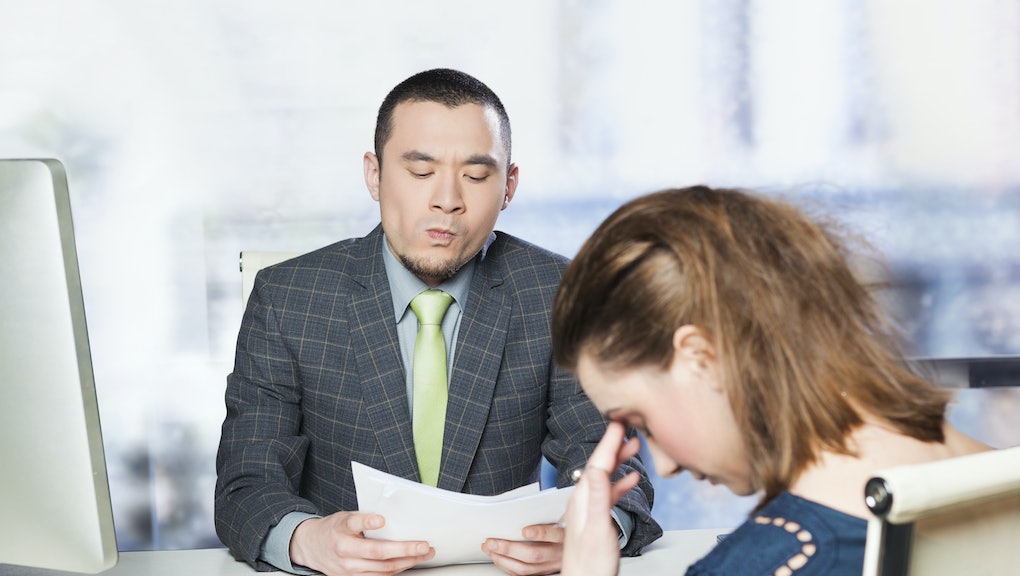 When interviewing for a job — or even once you’ve started your new gig — there’s a lot of pressure to watch what you say to your hiring manager, boss or company executives. You know you have to be cautious when responding to a difficult question, telling someone their idea is lacking, or saying no to unrealistic requests.

But despite your efforts to mind your language, a newly published PLOS study on the effects of social status on vocal characteristics suggests you’re unconsciously giving away a lot about your real perceptions of the workplace with just the pitch of your voice. “We inadvertently send signals about where we believe we are in the hierarchy while talking with others,” postdoctoral research fellow and study co-author Viktoria Mileva said in an email interview.

The study revealed that the pitch, intensity and variability of speech all change depending upon your perception of your relationship with your conversation partner — “to try to give the appropriate impression during an interaction and avoid potential danger,” Juan David Leongómez, an evolutionary psychologist and co-author of the PLOS study, explained. The problem is that sometimes you unwittingly miscalibrate and end up sounding too assertive or deferential.

Some good news? Even if your change in tone happens without you realizing, awareness of this phenomenon could help you adjust your speaking pitch and pace to come across as being more in control of the situation — and more appropriately dominant or submissive in a way that will improve your workplace interactions.

Here’s what happens to your tone

To determine how tone changes based on whom you’re speaking with, the University of Stirling researchers showed 48 students — 24 male and 24 female — credentials and information about potential employers. They later observed their vocal responses in simulated job interviews. Some of the employers were portrayed as dominant (aka forceful and intimidating), others prestigious (knowledgeable and skillful) and others neutral.

The participating students were asked to rank both their own level of dominance and prestige as well as that of their interviewers. This self-assessment was important because, as Leongómez explained, the way your voice changes when interacting with others depends upon both self-perceived status and your idea of the status of those with whom you’re interacting.

The less-dominant students were observed to speak in a higher pitch — signaling submission and a lack of desire for confrontation — while more dominant students lowered their own voices to signal that dominance, even when talking with an employer whom they believed to be dominant and prestigious. This change in tone is an unconscious response people adopt to “either to assert dominance by lowering pitch or to signal submission by increasing pitch,” Mileva said.

The problem is that an overly lowered tone could be perceived as aggressive, which isn’t necessarily the impression you want to convey during an interview or when talking to your boss.

At the same time, when speaking to someone who is perceived as an authority figure, signaling submission with a higher voice pitch could come across as cowering before authority, and not necessarily thinking for yourself.

Can a vocal pitch change help you?

We tend to change our pitch and the variability and intensity of our speech, Leongómez said, in an unconscious attempt to give a good impression: “Sending the right message can help you, for example, gain status (be perceived as somewhat dominant or prestigious), or to not be perceived as a challenge and therefore avoid potential confrontations,” he said.

The key is to manage your vocal impression so you don’t overcompensate and give through a dominant tone the impression you have less concern for others — or that you’re challenging your prospective employer or boss. Meanwhile, underestimating this effect and using a too-high pitch might make you seem weak when you’re talking with a colleague, important client, or during a meeting with superiors.

One last note of caution, though, is that in some tense situations — especially if an interaction with an intimidating or dominant person goes wrong — Leongómez said, it’s unlikely you will fully control your tone. The best move you can make? The tried and true: Take a beat and think before you speak.