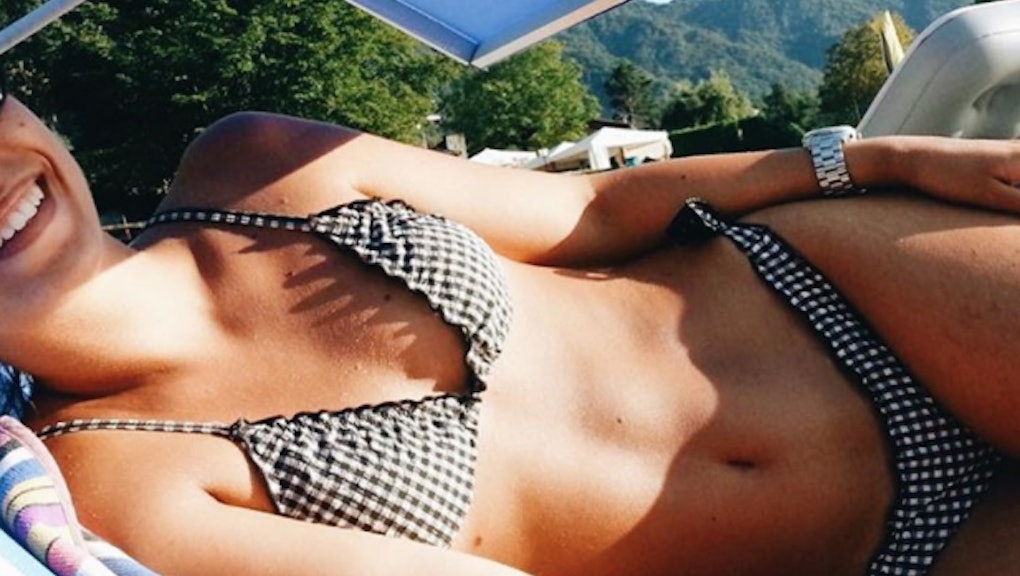 Where do thin people fit into the body-positive conversation?

You have plus-size women to thank for body positivity, the social media movement that started less than 10 years ago and remains a nearly unstoppable force for self-love and appreciation.

For years, these women have been the ones publicly airing their feelings about their bodies on social media and destigmatizing important conversations around fitness, health and beauty. Even now, when a brand organizes a body-positive photoshoot, the women at the forefront are usually plus-size or curvy.

So it may strike you as odd that when skimming through the #BodyPositivity hashtag on Instagram, there are images like this:

Conventionally thin or fit people are now joining the body-positive movement, embracing an idea launched by plus-size women who felt their bodies were unappreciated or flatly ignored by the fashion industry and the media. Maybe that’s surprising to you, but it really shouldn’t be: According to model and activist Denise Bidot, body positivity was never for just one section of people in the first place.

“We started the conversation,” Bidot said in an interview with Mic. “It was a way for girls who had platforms to reach other women and say its OK to be yourself, and we’re going to show you that by being on billboards and magazines. It was never that the conversation should only be for curvy women. The narrative has stayed consistent that you don’t need to be anything other than yourself to feel beautiful.”

Bidot dates the body-positive movement back to 2009, when model Crystal Renn wrote her book Hungry: A Young Model’s Story of Appetite, Ambition and the Ultimate Embrace of Curves — which kind of blew open the conversation around curvier women and how they felt like society affected their own body image.

But while the book highlighted this underserved demographic, social media helped unite these women and carve out a message that they, too, deserved to be seen — not just be one another, but by everyone.

“People found a platform and found a voice,” Bidot said. “It became all of us standing together. We’re only going to make this happen when we put all of our voices in one.”

That’s definitely happened, as the movement has only become more powerful on social media in recent years. And with the movement growing so quickly but still lacking a specific message, the people talking about body positivity began to not so much shift as expand.

So what does the plus-sized Bidot think of conventionally thin people joining the cause?

“There were so many times in my life that I would get approached by thinner women,” Bidot said. “Body positivity is not exclusive to a size. Body positivity shows that you can be perfect and beautiful, and they should be empowered by it. Together we’re so much stronger, and I’m not going to sit here and judge them.”

That said, there are those within the movement who are a little more hesitant about thinner people talking about body positivity in a particular way. Model and blogger Katie Sturino still doesn’t feel like she can relate to a thinner person pushing this message.

“I’m not thin-shaming or anything like that, but it’s harder to find inspiration in a relatable way from someone who is so far on the other end of the spectrum,” Sturino said in an interview with Mic. “It feels a little far away, whereas someone who is a size 12 coming in and saying, ‘Hey, I’m comfortable,’ is more realistic and relatable.”

For Sturino, thinner people are more easily thought of as allies than as leaders in this conversation. They’re free to contribute and help spread the word, but seeing them as the most powerful people in the movement doesn’t feel right.

Model and blogger Troy Solomon has also seen a problem with thinner, fitter people using the body-positive hashtag for monetary gain or as a way to brand themselves.

“You see the people who want to take advantage of the movement and sell a product or a diet plan or a workout plan,” Solomon said in an interview with Mic. “That’s where you see a lot of fit people or athletic people using the movement in the wrong way. It’s like ‘body positivity!’ in their bio, but then it’s pushing a diet plan. It’s not bad for people who are looking to lose weight; body positivity doesn’t mean that I’m not going to change or anything. It just means those factors about me, like weight, don’t hinder the love that I have for myself.”

Body positivity is partly about reclaiming your body from society and its influence — and that, of course, can be a critical idea for conventionally thin or fit people to embrace. In fact, maybe they should, for the movement’s sake.

“If this conversation is going to thrive, everyone has to be allowed in it,” Solomon said. “It’s not this thing where fat people can only talk about body positivity. It started within the fat movement and the fat movement is trying to take ownership, but that’s not how movements work. We need to be available for everyone to join in, as long as their intentions are proper.”

For Bidot, thinner people getting into the movement only shows how damaging society’s definition of beauty has been on everyone. “It says that a lot more people were unhappy than we thought,” Bidot said. “When we realize what a movement it’s become, we realize how many years we made people feel bad about themselves. It’s so impressive to see this new generation of badass women take on the world. And it comes from this group of people who were like, ‘No, we refuse to feel bad about ourselves.’”

As Solomon put it: “If they feel as passionately as I do, then of course they have a seat at the table.”