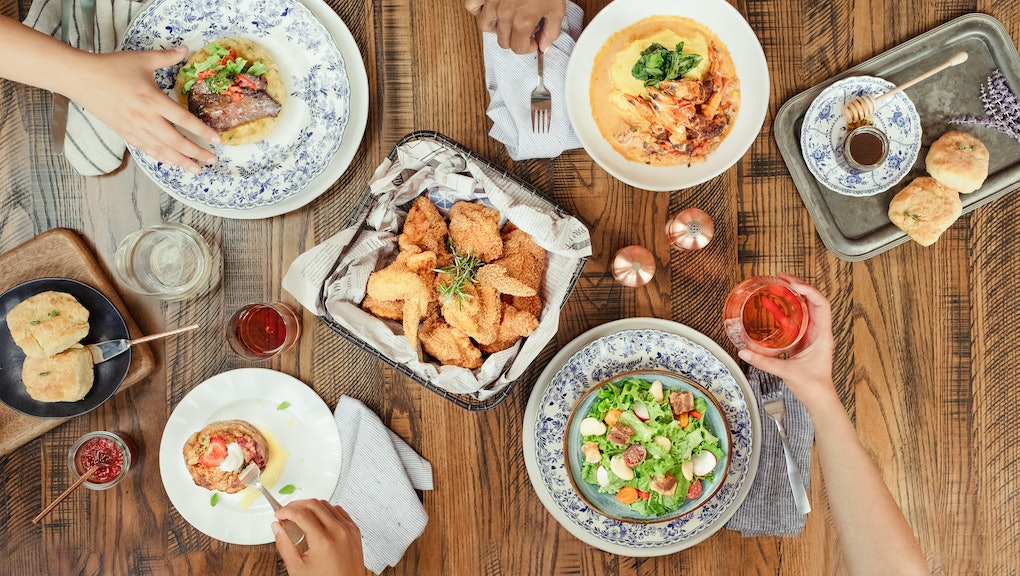 It’s impossible to discuss Baltimore’s changing restaurant scene without talking about the city’s history. Visitor guides are quick to tout gentrified blue-collar areas like Hampden and Remington, but the story of Baltimore has not always been one of up-and-coming businesses and tourism.

Racial tension has shadowed Baltimore since at least the early 1900s, and city-wide protests following Freddie Gray’s death in 2015 cast decades of struggle sharply back into national focus. Trying to reconcile these institutional, deeply worn patterns of segregation and inequality is tough, to say the least.

Some locals are hoping food will help bridge this gap. Humanim, a Maryland-based nonprofit that promotes economic equality and independence, has installed a culinary training program that places underserved job seekers in local eateries like R. House, a new food hall inside a renovated auto shop with roll-up garage doors and 15-foot windows. In 2016, Humanim debuted City Seeds, a program that trains formerly incarcerated people and at-risk youth to become lead line cooks and prep cooks.

As far as making creative use of its old industrial spaces, Baltimore — once a trading port with manufacturing centers in steel, clothing and cars — is in a league of its own. Another food hall, Mount Vernon Marketplace, has transformed a department store warehouse into a multicultural culinary funhouse: Ethiopian injera, oyster plates and Korean bibimbap can all be found under one roof.

“People seek us out not just from the local area, but also those visiting Baltimore from around the world. The vibe is intoxicating,” Glass said. “You can see it on people’s faces when they walk through the market.”

At Ida B’s Table, a new soul food restaurant downtown, chef and Baltimore native David Thomas has opted out of the typical barbecue-and-fried-chicken format. Instead, he said, his menu features soft shell tacos made from scratch with Madras curry and fresh kale, a nod to the fry bread of Native Americans (his grandmother was a Blackfoot Indian). For breakfast? Open-face quiche filled with farm-fresh eggs, gouda and brisket.

Thomas hopes that by aligning the restaurant with a key civil rights activist, and by having a more culturally conscious menu, he can address some of Baltimore’s history head-on.

Going back to the “roots” of soul food is a “way to reclaim history.” — David Thomas, Ida B’s Table chef

Going back to the “roots” of soul food, Thomas said, is a “way to reclaim history.” Much of what is currently considered Southern food originated from “slaves doing the cooking for their masters,” he said. “It was a way of survival for African-American populations in those times.”

In this lies a deeper truth about the food frenzy that’s spreading through Baltimore. Award-winning food and magazine features might bring in visitors, but it’s the commitment of the city’s restaurateurs and chefs to the local community that ultimately makes Baltimore’s food scene stand out.