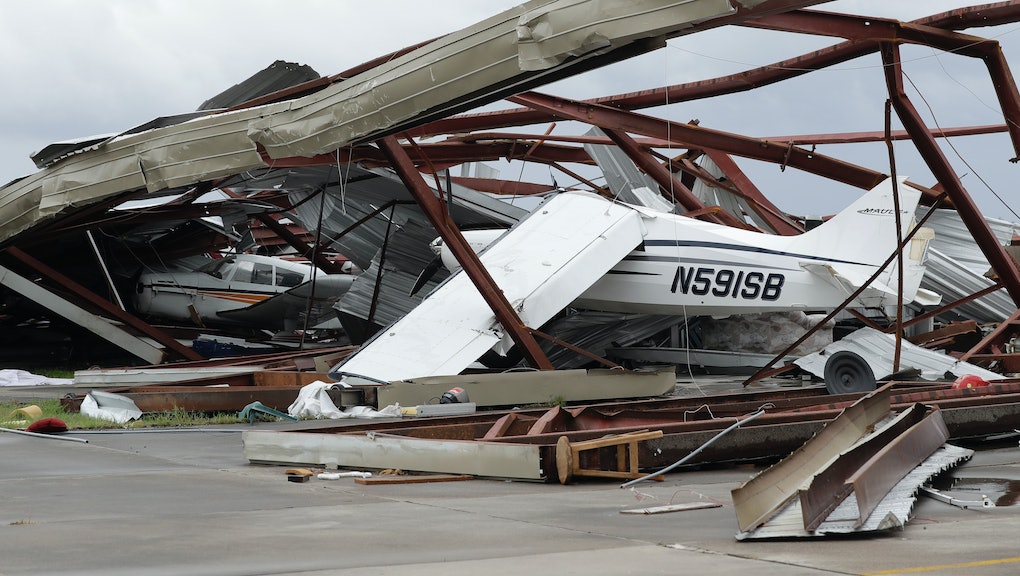 Former FEMA Spokesman: Trump has his head buried in the sand on climate change, storm readiness

In the wake of Hurricane Harvey’s devastating impact on the Texas Gulf Coast, the former top spokesman for the Federal Emergency Management Agency said that President Donald Trump had his head buried in the sand when it came to climate change and storm readiness.

“In my years at FEMA, I lost count of the number of 500- [and] 100-year floods that left communities devastated,” Rafael Lemaitre, former FEMA public affairs director, said. “There’s no question that climate change is real, that storms are getting worse, but how do we respond to that? Do we bury our heads in the sand or do we build safer and stronger?”

In a Monday phone interview, Lemaitre criticized the disconnect between Trump’s response to Harvey on Twitter and the president’s decision to gut regulations aimed at fortifying infrastructure in storm-prone areas.

“It’s disappointing to see the president go on Twitter and highlight that Harvey is a 500-year flood when days earlier he gutted a rule that actually helps communities,” Lemaitre said, referencing Trump’s mid-August announcement that he would eviscerate former President Barack Obama’s federal flood risk management standard, which sought to bring a “climate-informed science approach” to regulations on infrastructure threatened by extreme weather.

The former FEMA communications director argued that Trump, who once tweeted that climate change was a Chinese hoax, was in denial about the threat of climate change, and that his environmental policy decisions burdened the American taxpayer.

“We know that flooding will happen, so why leave the taxpayers on the hook?” Lemaitre asked. “The Trump administration is in denial about the impact of climate change in creating more severe floods. Trump’s decision to rescind that Obama-era policy is exhibit A of his malfeasance.”

Hurricane Harvey — a so-called “800-year flood” — made landfall in Texas on Friday, leaving in its wake at least nine people dead and 280,000 without power. One assessment of the damage caused by the storm estimates that it will cost the United States up to $40 billion.

Though scientists have largely demurred on whether Harvey was caused solely by climate change, many experts in the scientific community have pointed to climate change as a major factor that exacerbated the deadliness and devastation of the storm.

And scientists agree that more calamitous storms like Harvey are on their way.

“This is the kind of thing we are going to get more of,” Princeton University climate scientist Michael Oppenheimer told ABC News. “This storm should serve as warning.”

But for all their warnings, many decisions the president has made since taking office reinforce his deep skepticism — if not outright denial — of the perils of climate change.

Perhaps most notable of these actions was Trump’s decision to withdraw the United States from the historic Paris Agreement, an ambitious global commitment to ratchet down each participating nation’s carbon emissions by 2025.

Trump’s decision to join Syria and Nicaragua as the only nations not participating in the accord turned the United States into something of a pariah in the global community. But to those following closely, Trump’s decision to withdraw from the agreement was simply a continuation of the president’s reversals of Obama-era environmental policy, such as his decision in March to dismantle the Clean Power Plan, which would have limited carbon emissions from fossil-fuel-burning power plants.

Former Oklahoma Attorney General Scott Pruitt sued the Environmental Protection Agency over the Clean Power Plan. Pruitt, who has been characterized as a climate change denier, currently leads Trump’s EPA. Under Pruitt’s stewardship, climate change has been de-emphasized at the agency.

But just as integral as the leaders Trump picks are the vacancies Trump has yet to fill. The National Oceanic and Atmospheric Administration — the government agency which, along with FEMA, is most crucial to alerting the nation of potentially deadly weather events — still does not have a permanent leader.

“[The lack of leadership] is a concern,” retired Lt. Gen. Russel Honoré, who was one of the top organizers in the 2005 response to Hurricane Katrina, told CNN. “We don’t allow temporary coaches in the SEC, so why the hell are we running a federal agency with a temporary leader? It doesn’t create a team.”

On Tuesday morning, the president suggested on Twitter that the numerous vacancies in his administration were part of a strategy to reduce the size of government.

But it’s not just the agency’s lack of long-term stewardship that may prevent it from functioning at full capacity during situations like Harvey: In Trump’s proposed budget for the next fiscal year, the president slashed NOAA’s funding by 17%, which scientists warned could “place American lives and property at risk.”

In order to protect homes and lives, Lemaitre proposed a small, meaningful first step Trump could take towards making sure the United States was taking meaningful action towards combating the threat of climate change.

“[The Trump administration] could increase funding for hazard mitigation grants,” Lemaitre said. “This is money that can flow to states to fund smarter and safer building. Everything from elevating existing homes to buying out areas that flood over and over.”

All eyes are on the president Tuesday as he visits Texas to inspect the areas damaged by Harvey. Though Trump is expected to show support to the people who have lost their homes to the disastrous flooding, perhaps the most significant way he could do so would be to take meaningful action towards preparing the nation for the very real hazards caused by climate change.