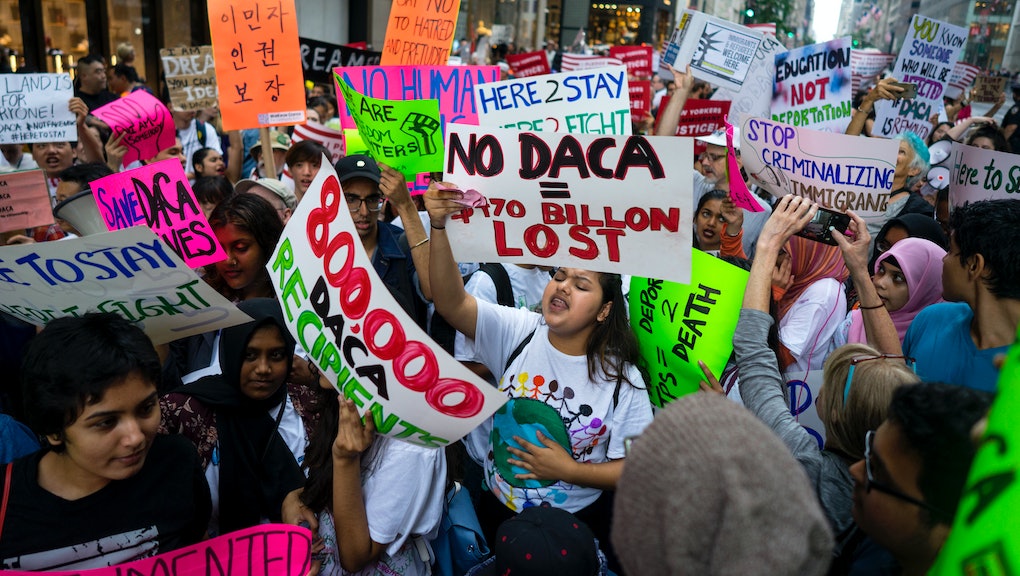 Study: If Trump suspends DACA, more than 1,400 people a day could lose the ability to work

For years, immigrant rights groups have made the moral argument to preserve the Deferred Action for Childhood Arrivals program, better known as DACA. Now, with reports saying President Donald Trump is set to end DACA, advocates are making a new, last-ditch appeal: Deporting immigrants, they say, is bad for the economy.

DACA creates a process for people who were brought to the United States before turning 16 to apply to live and work in the country legally. The program, started in 2012, now protects nearly 800,000 people from deportation.

Now, a new study from the Center for American Progress and Fwd.us says if Trump suspends the DACA program, DACA recipients could lose their ability to work at a rate of 1,400 recipients per day. That means 30,000 people could lose jobs they currently hold or drop out of the American workforce every month.

An August survey of current DACA recipients reported 91% are employed.

“If DACA is revoked, nearly 700,000 individuals who are currently employed and contributing as part of the American workforce would be stripped of their ability to work and could be fired over the course of the next two years,” the study authors wrote.

The study assumes Trump would put renewals of DACA on hold — recipients of DACA must renew every two years. That means the program would phase out entirely, if ended now, by the fall of 2019.

The study says ending DACA would cause mass confusion among employers, many of whom likely do not know they are employing a DACA recipient.

In January, the CATO Institute, a libertarian think tank, wrote that ending DACA would hurt the American economy to the tune of $280 billion in lost economic growth over the next decade.

In December 2016, the Immigrant Legal Rights Center found ending DACA would cost American businesses $3.4 billion in employee replacement costs. The reduction in payments into Social Security and Medicaid would also decrease by $24.6 billion over the next decade.