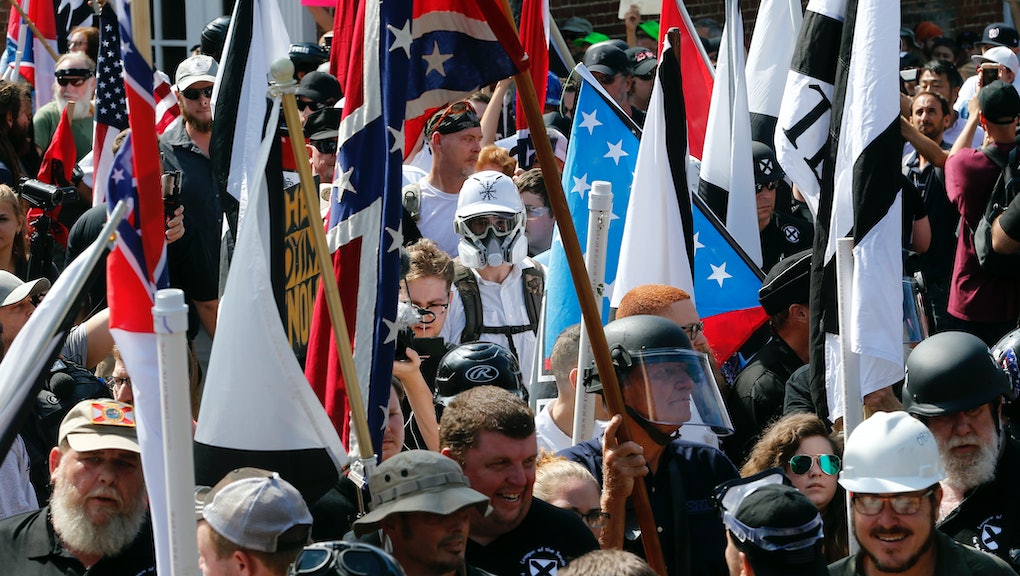 Every day, we bring you a dispatch on Trump’s America. Today’s focus: anti-immigrant hate.

The anti-immigration views of President Donald Trump and his top advisers are well-documented. Now, immigrant rights advocates are taking their critiques a step further, tying top Trump officials to organizations that peddle racist and hateful ideologies.

The Center for New Community, a group that researches and helps organize against anti-immigrant groups, has launched PlotAgainstDACA.com to show how groups that support a majority-white America have found sympathy in Trump’s White House.

The website’s launch, first shared exclusively with Mic, comes as Trump is considering ending Deferred Action for Childhood Arrivals. More than 750,000 people who came to the U.S. before they turned 16 could face deportation if the program ends. The latest reports say Trump is torn between his campaign pledge to kill the program and his own sympathy for its recipients.

The CNC’s database shows how groups like the Federation for American Immigration Reform have been able to move formerly extreme ideas into the mainstream through ties to Trump’s advisers.

The leader of Trump’s voter integrity panel — formed after the president falsely claimed millions of undocumented immigrants voted in the 2016 presidential election — and a top official at U.S. Citizenship and Immigration Services are tied to these groups, according to the CNC, along with Attorney General Jeff Sessions.

A pending lawsuit brought by 10 conservative attorneys general that forces Trump to make a decision on DACA by Sept. 5 was also driven, in part, by these anti-immigrant groups.

“Their goal is to make America white again,” Schubiner said. “We can look back and trace directly the influence that anti-immigrant groups have had in bringing these fringe, extremist ideas into the political mainstream.”

This charge comes in the wake of controversy over Trump’s comments following violence in Charlottesville, Virginia. Critics said the president equivocated violent white supremacists with the groups protesting them.

At the center of these anti-immigrant groups is John Tanton, a retired ophthalmologist from Michigan who founded three groups in the 1970s and 1980s identified by the Southern Poverty Law Center as “anti-immigrant hate groups.”

Tanton has said a “European-American” majority is required to maintain American culture.

Earlier in August, Trump backed a bill that would cut legal immigration to the U.S. in half — from 1 million to roughly 500,000 annually — by favoring immigrants “who can speak English, financially support themselves and their families and demonstrate skills that can contribute to our country.”

For decades, these anti-immigrant groups sought to curtail immigration to preserve a white majority in the U.S. They’ve also favored stopping immigrants from bringing their families and ending birthright citizenship.

To slow legal immigration under current law, the Trump administration has increased the bureaucratic requirements to come to and stay in the U.S. On Tuesday, for example, the administration added a hurdle to the process for people seeking green cards.

The attacks on DACA come despite overwhelming public support for the program. Majorities of Republicans and Democrats alike support keeping DACA. A new study released Tuesday found 1,400 people would lose the ability to work each day if DACA is suspended.

“We hope that this resource will shine a bright light on the racist roots of the organized anti-immigrant movement and [its] support for dangerous policies,” Schubiner said.

Today’s question: Are policies that would limit immigration “hateful” or “racist?” Please email us at trumpsamerica@mic.com.

Photo of the day:

The president and first lady were in Texas on Tuesday to survey damage from Hurricane Harvey. Now a tropical storm, Harvey has made landfall again, this time over Louisiana. The storm has dumped more water on the continental U.S. than any storm before it, with the death toll now at 30.

Houston’s mayor set a curfew to prevent looting while much of the metro area remains underwater. Hazardous chemical releases are on the rise.

Republicans in Congress believe they can quickly agree to fund long-term relief efforts in Houston. On the ground, mosques are helping Harvey victims. Here’s the integral role hotels play during disasters. Twelve years after Katrina, here’s how New Orleans is preparing for Harvey. And Houston debunked a rumor that immigrants could not seek shelter without documentation.

A follow-up to yesterday: “Harvey is another reason we can’t be complacent on climate change.”

Sarah Palin’s defamation lawsuit against the New York Times has been dismissed.

The defense secretary said he will order a review of Trump’s ban on transgender military service and, in the meantime, will not implement the new policy.

The Times went deep on how Trump has changed power and influence in Washington.

No surprise: Trump will pitch a tax reform proposal in Missouri that is light on substance.

An immigrant activist spoke out on Trump’s pardon of former Maricopa County Sheriff Joe Arpaio. Watch the video below.